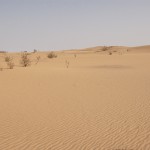 Military Intervention in Mali Would be a Disaster

The prospects in Mali are unremittingly gloomy. All talk is of military action, which is easy but ignores the facts that (i) the Malian army is not going to be in a fit state to fight anybody for a year or two; (ii) regional forces under ECOWAS are going to need a lot of local training and adaptation of equipment to fight in the desert; (iii) nobody is going to fight effectively in the desert during the hot season (April to September), except of course the Tuareg.

All the scenarios point in the same direction. If there is war, the results will be largely the same whether ECOWAS and Malian forces retake the north or not. Any fighting will have horrific collateral effects both domestically in the north (all remaining civilians will flee over the border, regional food security will be jeopardized), and in terms of political spill-over to neighbouring countries (Tuareg in Algeria, Libya, Niger and Burkina Faso will wonder if they are next). The Tuareg fear they will be subject to a campaign of genocide, and these fears are not dispelled by reports of a killer unit in what is left of the Malian army already doing assassinations.

If ECOWAS and Mali win, Tuareg political demands will simply be driven underground, to re-emerge in ten years’ time. Fundamentalism and drugs traffic flourish in both cases. In one case Mali breaks up and ‘Azawad’ secedes but the impact of that will be inconsequential. By far the most likely outcome is a stalemate, under which Malian and international forces take the towns and the Tuareg keep the desert.

The alternative is that war preparations are halted. The Mali government, with help and arm twisting by the international players, starts serious negotiations with the Tuareg (MNLA and, if they are prepared to make the necessary commitment, Ansar Edine) on the basis that the Tuareg drop demands for an independent Azawad but are granted a ‘devo-max’ regional solution under which they get a substantially devolved governance based on the provisions of the 1992 National Charter, fully implemented and under international protection. This would entail Tuareg fighters enrolleding in a new border force responsible for chasing al-Qaeda, MUJAO and others out of Mali.

3 Responses to Military Intervention in Mali Would be a Disaster