Military Intervention in Mali Would be a Disaster The New Peace: A Lecture by Mary Kaldor 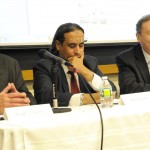 by Casey Hogle and Soumia Aitelhaj

A little over a year after the death of the former leader of Libya, Muammar Gaddafi, the World Peace Foundation hosted a panel to illuminate the current state of affairs in Libya. Hugh Roberts, Edward Keller Professor of Middle East history at Tufts and the former North Africa Director at the International Crisis Group, moderated the event, which took place Thursday, November 15, 2012. Dirk Vandewalle, a preeminent expert on Libya from Dartmouth College, began with an optimistic assessment. He praised Libya’s efforts at state building and said the nation has defied analysts’ predictions that it would fall into chaos. Vandewalle noted several indicators that the country is going in the right direction: it held free and fair elections in July, has a growing civil society and improving bureaucracy, and its political leadership is playing by the rules of the game as well as reaching out for international advice and assistance.

More progress is needed quickly to ensure Libya capitalizes on this window of opportunity to establish a modern state. Most importantly, the central government must monopolize the use of violence and gain control of the dozens of militia. Vandewalle warned that solidifying centralized state authority will take years or even decades. Libya should also undertake reconciliation efforts and diversify its economy away from exclusive dependence on oil. Libyan author and professor at Benghazi University Faraj Najem praised the transparency of Libya’s political processes and reiterated Vandewalle’s optimism for the country. He identified similar challenges, including the power of militias and the plethora of weapons. In addition, Libyans have not established a political culture of public disagreement and opposition, which are essential for democratic political debate. In that vein, Najem expressed concern about the destabilizing influences of federalists and Gaddafi sympathizers, and argued that they should be brought into an inclusive political process. He argued that the Gaddafi loyalists should not be ostracized as “the defeated.” Najem painted a rosy economic picture, saying that most Libyans feel the economy is moving in the right direction. However, Libyans should curb their inordinately high expectations for immediate progress. There is a problem with the word “now!” he said.

Roberts requested Vandewalle to expand on the current security situation and how the process of establishing an effective army and police force can be accelerated. Vandewalle explained that unlike its neighbors Egypt and Tunisia, where leaders were deposed but the overall system remains largely in place, Libya has the blessing and curse of a blank slate. Libya does not have to spend time dismantling corrupt or dysfunctional institutions, but it also must build everything from scratch. For example, Vandewalle noted it takes about 20 years to build a professional army. Attempts to establish traditional security institutions have begun, such as the formation of the Supreme Security Council and Libyan Shield, although both entities have acted independently and against the interests of the state. Central authorities must slowly fold militias under its full control.

Vandewalle championed international training and technical expertise to expedite the process, expenses that the oil-rich Libyan state can luckily afford. Najem agreed, but cautioned that assistance should be packaged carefully, with clear Libyan ownership. Najem also explained that the former police are discredited because of their association with Gaddafi, and so Libya is in need of a new police force. He advocated against incorporating militias as a group; individuals should be able to enlist, but full groups should not be accepted as a unit. Roberts asked Najem to clarify the electoral system, in which only 80 of the 200 seats are assigned to party lists, with the remainder open to independent candidates. Najem explained that the system was developed to prevent the Muslim Brotherhood from gaining a large majority – a concern that proved unwarranted as they won only17 seats. Libya is carefully eyeing the Muslim Brotherhood and radicals in the neighboring countries, Tunisia and Egypt, to avoid similar outcomes of Islamist success. Najem again emphasized the need for the new Libyan government to embrace opposition and include a diverse set of voices.  He praised the large number of women in the current legislature, with 33 women winning seats thanks to the requirement that party lists alternate men and women. Vandewalle added that only two other countries have the same electoral system – single nontransferable vote – which tends to fracture the political system and prevent strong blocks from forming. This may be a long-term barrier to effective governing.

An audience member questioned if the disqualification of four ministers in the recently-formed government can be characterized as “soft de-Baathification.” Both panelists agreed, and Najem explained that many want to punish those who aligned themselves with Gaddafi. Vandewalle recommended Libyans accept the need for some transitional justice measures now. They have been hesitant to do so for fear of opening up more problems, but will be better off to deal with tensions today.

The panel moved to discuss Libya’s role in the African context. Both Vandewalle and Najem argued that Libya’s relationship to the rest of Africa had been centered around Gaddafi, who sought to further his personal influence. With Qaddafi no longer in the picture, it remains unclear how the new Libyan leadership will define its interests in sub-Saharan Africa, including its relationships with ethnic groups, like the Tuareg and others, whose traditional lands include southern Libya and neighboring countries. Furthermore, Vandewalle and Najem both agreed that the new Libyan government is interested in North African regional cooperation, particularly the activation of the Arab Maghreb Union (AMU) due to its economic status. Libya’s role will be “horizontal not vertical” as it is concentrated in North Africa, says Vandewalle. Additionally, Najem pointed to the limitation of the term “Arab,” as it excludes Libyans who are not Arabs, among them the Tuareg who are part of the Amazigh.

The panel concluded with more discussion about the position of Tuareg in southern Libya, with a question regarding their identity and identification. Vandewalle explained that many Tuareg do not have a nationality, and the government has unfortunately not taken action to address the matter. Najem affirmed that some do not have any identification information, which it is not viewed as a priority issue. There is a tendency among the government and media to focus on the three main cities and the coastal towns of Libya at the expense of the large southern region. Najem recommended better municipal government systems to help empower Libyans living on the margins.

Casey Hogle and Soumia Aitelhaj are students at the Fletcher School.

One Response to Libya Today: Glass Half Full?