Sizzling South Sudan: Why Oil Is Not The Whole Story Review of Chinua Achebe’s There Was a Country: A Personal History of Biafra 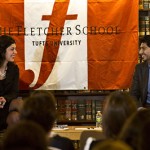 Taking Stock of the Post-9/11 World, Through the Lens of Social Media

If you missed our event on January 14, 2013, “Can social media help bridge divides between diverse Muslim and Western communities?” you can access an article by a Fletcher student correspondent, photos and a video about it on Fletcher Features.

“There has been a decentralization of gatekeepers of information facilitated by platforms like Twitter,” said Minty, to the crowd of Fletcher students, faculty and staff that gathered in the Ginn Library’s Reading Room for the event. “The Twitter ‘hashtag’ is one of the most powerful tools of communication in the world today that allows individuals to move from a face-to-face conversation to a collective discussion.”

This idea of collectivity was echoed by Pandith, whose position was created by Secretary of State Hillary Clinton to help engage civil society through tools of soft power, working with U.S. embassies around the world. In an interview with the Fletcher Forum last year, she explained the importance of “relationship building” between the United States and Muslims after 9/11, to create an idea of “we” rather than “us and them” – an effort that is made easier by social media platforms.

“My mandate is primarily to engage younger generations at the grassroots level: a staggering 62 percent of the world’s population is under 30 years of age. They probably are among the top constituents in social media platforms as well. It is possible, therefore, to facilitate a conversation among them and reframe the way in which we think about the world,” she said during the event.  “Social media helps put ‘we’ at the center of the conversation,” she explained.

Pandith noted that young Muslims have been using social media tools to push back against narratives predominant in their communities. “Young Muslims are asking themselves right now: how can I be modern and Muslim? The question is not being asked in places of worship, but on online platforms. The youth are not waiting for people who possess microphones to define who they are.”

Minty exemplifies this generation. In his late twenties, Minty heads a team of young innovators navigating the complex world of social media for Al Jazeera, and strategically positions the broadcaster as a “convener” of the many debates that take place in the digital landscape.  “Mainstream media is still mostly a one-way route,” he said, in which “people are talking at you, not to you.”

The full article covering the event, video and additional images are available here.