The Dangerous Arguments in the 2012 Human Security Report: Moving the Debate Away from the Academics and the Wonks African roles in the Libyan conflict of 2011 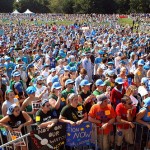 Advocacy in Conflict: Do public advocacy campaigns make an impact?

Is advocacy today really activism as it is traditionally understood, and does it have any impact or relevance? These were the questions under discussion on February 28, 2013, when the World Peace Foundation hosted three speakers as a part of a student run seminar on Western Advocacy in Conflict. Rony Brauman, Director of Research at Doctors without Borders and Associate Professor at Sciences Po; Laura Seay, Assistant Professor of Political Science at Morehouse College and blogger at Texas in Africa; and Amanda Taub, Adjunct Professor of International Law and Human Rights at Fordham University and blogger at Wronging Rights, responded to these provocations in a panel moderated by Alex de Waal, Executive Director of the World Peace Foundation.

In her initial response, Amanda Taub critiqued contemporary mass awareness and advocacy campaigns that simplify conflicts in order to reach wider audiences. Not only do they present oversimplified solutions that do not stem from actors involved in the conflict, but they are often drivers of US policy toward conflict, invariably demanding more U.S. action. Hence, these campaigns imply intervention is always the answer, advocating for solutions that are achievable and palatable to an American public, but marginalize communities experiencing the conflict. Finally, she warns against the perception that human rights are straightforward or uncontroversial, since this presents a clean, dichotomized illusion of good and bad, which is far from the realities of conflict or how durable peace can be achieved.

Laura Seay agreed with Taub’s critiques and focused her comments on the Democratic Republic of Congo. Congolese were not consulted about section 1502 of the Dodd–Frank Wall Street Reform and Consumer Protection Act, which requires companies to verify that no minerals they use are from the DRC conflict. From Seay’s experience interviewing hundreds in Congo, no one was pointing to mining as a major driver of the conflict or asking that it be shut down. Instead, she believes the ‘conflict mineral’ debate distracts from more central issues in the DRC, such as rebuilding a functioning government. It also leads to several negative unintended consequences, such as massive unemployment of artisanal miners, increased human rights violations in the unregulated gold mining sector, and increased smuggling.

Rony Brauman argued that the tendency to acclaim what western activists achieve versus recognizing the agency of local actors has a long history. Pointing to the 1960s activism against the Vietnam War, he argued that it has been falsely framed as a huge success for activists who turned the tide of popular success and prevented an otherwise winnable war from being won, when, in reality, the U.S. lost the war to the Vietnamese. This is problematic because it perpetuates the myth that mobilizing the media and public opinion can create real leverage that leads to beneficial solutions without regard to the actions of others. A better example of a successful campaign is the South African Treatment Action Campaign, which increased access to anti-retroviral medicine in the late 1990s. Brauman explains that its positive impact was a result of being driven by local forces and of having a niche focus with a sympathetic victim.

The session opened to audience questions. One audience member asked about the role of expertise in current advocacy efforts. Seay noted that in her experience, advocacy organizations reject academic expertise if it contradicts the simplified narrative that they are presenting. She also argued for the value of local expertise in changing norms. Seay presents the example of Tostan, which works in Senegal combatting female genital cutting through a community-based approach. Responding to the same question about expertise, Taub warned that expert-driven institutions like the International Criminal Court can, “cloak intervention with the presumption of moral neutrality” when they are actually making political choices.

Another question was if awareness – absent the oversimplified or US-centric policy focus – can be beneficial in and of itself. Taub believes it can be, but she warns that the information may be distorted to make the message more palatable or attention grabbing. Brauman further encourages questioning which issues and locations become the focus of that awareness raising. Why do we hear about rape in Eastern Congo but not in the U.S.? He recommends that organizations be more cognizant and explicit about the choices they make in their focus, since these choices are in themselves political decisions.

Ending on a positive note, the panel responded to a question about the components of a successful campaign. Brauman believes focused advocacy that addresses a specific issue tends to be more effective, and their impacts can be more closely measured. Taub noted the value of targeted international attention to protect at-risk human rights defenders. She also encouraged US advocates to focus greater attention on their own government’s human rights abuses and lamented the divide between foreign and domestic human rights activists. Seay, who teaches a course on advocacy, emphasized that the key is a realization that advocacy is not about the activists – it’s about people actually in conflict-affected communities. Seay said, “I don’t like the phrase ‘voice for the voiceless.’ It’s condescending and implies that people who don’t have big platforms don’t have opinions.” Finally, de Waal discussed his work in the anti-landmine campaign. The creation of an international treaty and the award of the Nobel Peace Prize – considered major successes by most – resulted in his view, in the premature demobilization of the movement because the victories implied that the movement had already reached all its objectives.

Western advocacy in conflict contexts is prone to misdiagnosis of the causes of conflict, simplification of the solutions, unexamined arrogance, and deafness to local actors. It’s a tricky business, trying to save the world.

4 Responses to Advocacy in Conflict: Do public advocacy campaigns make an impact?