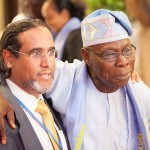 Finally the African Union is able to acknowledge the massacre of Abu Salim prison as one of the major human rights violations in Africa like the Apartheid racial system in South Africa, and the genocide in Rwanda, and the slave trade in Africa, etc. The African Union human rights memorial, itself on the site of a notorious prison, will formally recognize the victims of the Abu Salim prison massacre and other victims of the crimes of the regime of Muammar Gaddafi.

I have now an official letter from the African Union to the Libyan government and civil society organizations in Libya and abroad, requesting that what remains of the Abu Salim prison be preserved to become a place of pilgrimage and memorial of the unprecedented human right abuses that were perpetrated in this place.

More importantly, we shall strive to find answers for the families of the 1270 martyrs who were killed in less than three hours by Qaddafi’s thugs on 29th of June 1996. To this day, we do not know the whereabouts of the bodies of those innocent murdered ones. I express my thanks to colleagues from Ethiopia and the United States, Britain, Tunisia and South Africa for the support they gave me in this regard.