What Actual Spending Tells us About South Sudan’s Governance Visualizing South Sudan: The Culprit: The Army 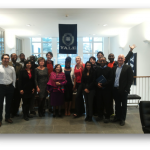 Youth, Conflict and Governance in Africa

Social and political changes in the context of conflict and governance in Africa do not affect youth in isolation, but collectively.

On February 28, 2014, Professors Catherine Panter-Brick from Yale University’s Conflict, Resilience and Health Program & Anthropology Dept. and Alex de Waal from the World Peace Foundation at the Fletcher School, Tufts, co-convened a workshop to assess how young people across Africa are changing the nature of governance. Hosted by the Department of Anthropology at Yale University, with support from the Hendel Fund and the MacMillan Yale Council on African Studies and the World Peace Foundation, the workshop included analyses from scholars and practitioners in anthropology, media studies and communications, politics, and economics—fields that have hitherto been working largely in parallel. The workshop explored key cases from diverse parts of the continent, notably the West African Sahel, the Great Lakes, Kenya and South Africa to examine the how young people are reshaping the ways in which they engage with one another and with the life of their countries.

Alcinda Honwana, Professor and Chair of Development at the Open University and Philip Thigo, Associate at the Social Development Network in Nairobi, Kenya kick-started the workshop with powerful messages about the separation between formal politics and power among youth across Africa, and the unique role technology plays in determining how leaders of African states interact with their young citizens. “Politics is the means to get things done, and power the ability to get things done,” recalled Honwana, arguing that many countries are experiencing a period of interregnum as youth grapple with how to express their power outside of formal political channels. Africa is the world’s youngest continent, with large majorities of the population under thirty years old. While many African youth largely stand as a socio-economically disenfranchised populace, the past decade has shown that young Africans have generated their own methods to convey to the world the “extemporaneous and precarious nature of their lives.” Honwana emphasized the challenges facing many youth who could not access “reliable pathways to adulthood” and were unable to meet societal expectations in their countries of how to graduate to adulthood. She referred to this delayed transition to becoming an adult as “waithood” and expressed deep concern at how African societies, both north and south of the Sahara, would handle this little-acknowledged challenge.

A recurrent message throughout the workshop was the disconnect between power and politics and the recognition that African youth are capitalizing on new mechanisms for interaction: the deregulation of communication, associated with cellphones, satellite phones, FM radio, global television, the internet and social media. The conscious use of these media have profoundly altered the political terrain of countries such as Kenya, Mali, Chad, Cameroon, Sudan, South Sudan, Rwanda and South Africa. “Governments are not all power. Africa’s youngsters have a voice even when under duress, and they are using it in a way that is specific to them” Thigo concluded.He described how young Kenyans had developed a series of internet platforms, building on cellphone users and social media, for crowd sourcing of electoral violence, monitoring and enhancing public services, and encouraging people to register and vote in the forthcoming elections. Not only were young people’s voices being amplified and strategically used by these mechanisms, but government itself was remarkably responsive. However, Thigo warned that the current situation in which civil society held the technological edge over government was not foreordained, and that these instruments were also used for surveillance and control.

The second day of the workshop, delved more deeply into a number of specific issues. Alex de Waal opened the conversations with a presentation on the transformations of African governance that have occurred due to economic crisis and civil war in the 1980s and 1990s, and the recovery of African governance from this meltdown, influenced by widespread decentralized control of the means of violence, state income from rents such as oil and security cooperation, and the changing networks of communication and convening brought about by new technologies. He argued that while the bargaining between ruler and armed elites was generating kleptocratic systems that made it near-impossible for states to produce public goods, the demands and pressures articulated by younger people, especially using new means of communication, had the potential to create new public spaces in which governance was responsive to its citizens.

Marc Sommers moved the conversation into the specific challenges facing youth in several African countries. Sommers emphasized the diversity of young people’s circumstances and strategies, even in countries so ostensibly similar as next-door Rwanda and Burundi. He described how migration to cities provided opportunities for youth to create their own social environments that escaped some of the pressures of their elders, so that being stuck in “waithood” mattered less. Jenny Aker explored how the introduction of cellphones into African societies was playing a key role in livelihoods. The massive growth in cellphone ownership in little more than a decade—from luxury to near-ubiquity—and the availability of ultra-cheap text messaging and new technologies such as cellphone banking, were opening new opportunities for people, young and older, to generate greater income at the margin and secure their livelihoods.

Mirjam de Bruijn, drawing on her ongoing research into “connecting in times of duress” from some of the most conflicted states in central and west Africa, deepened this analysis, showing how cellphone technology facilitated networks of communication that underpinned not only livelihood survival strategies, but also political networks.

Anwar Dafaala spoke about the particular circumstances of mobilizing a young persons’ movement for social and political emancipation in Sudan, trying to outwit and face down a repressive government. The organization Girifna (“we are fed up”) creatively used social media to expose the government and generate youth activism, but faced a security apparatus that also tried to apply the same technologies for penetration and control.

Herman Wasserman provided an account of the media in contemporary South Africa, at the historic cusp in which the first “bornfrees”—citizens born after the end of Apartheid—were about to become voters. He showed the extent to which the contemporary South African state and ruling party were not responding to young people’s needs, and how both the mainstream press, though vigorous and uncensored, and social media, though growing, were yet to articulate alternatives.

These presentations underscored the variety of young people’s experiences in contemporary Africa, and the extent to which some were able to grasp new opportunities, while others were profoundly constrained. In the concluding session, others present including Azaz Elshami, Merlyna Lim, Cyril Obi, Rima Salah and Teferi Abate, contributed further diverse perspectives. The common thread to these contributions was that the emergence of new means of communication and convening—and the rapid expansion of access and increase in technological capability—held out enormous promise, which we are only just beginning to appreciate. Meanwhile, while some of Africa’s young people are seizing the opportunities presented, far greater numbers are still marginalized and bewildered.