Corruption and Insecurity: A Big Emerging Agenda When kleptocracy becomes insolvent: Brute causes of the civil war in South Sudan 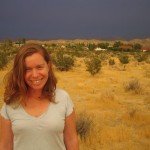 “Are you looking for the museo?” Having taken the wrong metro exit, I surely looked like the standard lost gringa standing on a corner in the old neighborhood of Barrio Brasil on Santiago’s west side. It was on that corner that I found that a simple request for directions to the Museum of Memory could lead to a lengthy conversation with locals about their experience under Pinochet. Eager to convey their memories of the 70s and 80s and what they witnessed in their own neighborhood, they are also a reminder of the kindness of Chileans as you meander through the gentrified streets of that have a touch of the nostalgic mixed with the new: sophisticated graffiti, art galleries and organic restaurants. A few older local men–a shopkeeper, a mechanic, a street sweeper–gathered to tell me about their personal memories of curfews and soldiers, as well as how important and necessary this new museum is to them as a community.

Necessary it is. As part of its struggle to rectify its past, Chile opened the Museum of Memory and Human Rights in 2010, which stands like a shiny new beacon on a large boulevard that marks the edge of a traditional neighborhood. It has been built to educate visitors about the human rights violations committed by the state from 1973-1990 and to confront Chile’s historical memory. Like many other museums in the world dedicated to memorialization in the wake of violence, Chile’s version is a large space filled with photographs, documents, and objects collected from all over the country. More than 3,000 Chileans died and countless others who were affected by new forms of state violence and oppression under Gen. Augusto Pinochet. The museum documents this era beginning with the 1973 coup that ousted democratically-elected President Salvador Allende, the violence and oppression that followed, the resistance of the people, the international solidarity movement and the slow process of justice and repatriation. One exhibit highlights the nearly 200 memorials throughout the country and is designed to look like a graveyard. The lower level houses a video installation by German-born artist and filmmaker Cordelia Dvorák entitled “25 Women/3 Countries/10 Questions” which is essentially conversations with female artists from Chile, Mexico and Colombia about women’s memory. Upstairs, in another interactive gallery, a forest of low-hanging pictures of the disappeared are accompanied by a soundtrack of eerie voices meant to reflect their absence.