International peacekeeping operations are deployed to complicated and troubled places. Often, reliable information is scarce, rumors and poorly-founded allegations are common, and interpretation of events is highly politicized. Recent controversies around what is going on in Darfur illuminate the need for much better data.

A former UN official, Aicha Elbasri, has made much-publicized allegations that the UN-African Union hybrid operation in Darfur (UNAMID) covered up evidence of attacks by the Government of Sudan. The magazine Foreign Policy took up the issue. The UN investigated sixteen incidents of alleged cover-up, and last week published a summary of its findings. The summary did not support Elbasri’s claims, finding only “a tendency to under-report unless absolutely certain of the facts,” but the full report has not been released. Elbasri has accused the UN of a “cover-up of a cover-up.”

Press coverage of this controversy has not yet included a basic point: peacekeeping operations collect vast amounts of data, and have the capacity to collect more, but rarely analyze those data in a rigorous manner. This is a missed opportunity.

I have not looked into the datasets for violence in Darfur for the last few years and cannot comment on the specifics of Elbasri’s claims. But together with colleagues, I have published analyses of data from earlier periods in the Darfur conflict, and looked in detail into earlier controversial incidents. Five years ago, UNAMID was also accused of under-estimating levels of violence in Darfur, but detailed examination of the evidence on that occasion, suggests that the mission was in fact correct on that occasion. The deeper point is that we need better data and more rigorous, sustained analysis, so as to know what is going on. Otherwise we will have fruitless controversies over specific incidents.

Statistical evidence for levels and patterns of violence in Darfur is contained in a paper published in Social Science and Medicine this month. This uses the dataset generated by the UNAMID Joint Mission Analysis Centre for 2008-09, drawing upon reports received by UNAMID, UN agencies, local and international NGOs, and other sources. The paper cross-checks these reports against open source reporting, and examines patterns of violence.

The paper underlines that good reporting and analysis of reports is an enormously useful and under-utilized resource. A force commander who is not making use of these kinds of data is severely hampered in deploying the mission’s troops and other resources. Mission leaders and planners who do not make the best use of these data are missing opportunities for more strategic responses. Claims and counter-claims about particular incidents can then be put in the context of overall patterns of violence.

Close examination of an incident that occurred in March-April 2009, shines a light into the need for objective and careful reporting and highlights the significance of good data. This incident also helps to explain why UNAMID reporting is on the cautious side.

Inter-tribal fighting in southern Darfur escalated in late March 2009, with clashes between the Habbaniya Arabs and the Fallata (a name given collectively to Darfurians of West African descent). Both groups were politically aligned with the government. The Rizeigat Arabs were also involved. The Civil Affairs Division (CAD) of UNAMID received reports of this fighting on 31 March and investigated over the following two days.

I was working with the African Union High Level Panel on Darfur at the time and was given copies of the internal reports. The first CAD report provided information from a meeting with the Fallata tribal Advisory Council, which reported 220 fatalities in fighting over the previous three days.

On 1 April, CAD met with a member of the Fellata Advisory Council in Nyala to discuss the tribal fighting in Tulus and Buram localities. CAD was informed that four major clashes occurred on 29-30 March between the Habaniya and the Fallata and between the Habaniya and Reizigat. On 29 March, the Habaniya and the Reizigat reportedly battled in Al Kooka village, during which 161 persons were reported killed. On the same day in Sergeila area, Fallata forces clashed with the Habaniya. On 30 March, the Fallata and Habania [sic] fought in the Saigoon area near Rajaj, during which 50 persons were reported killed. Another clash took place between the two tribes in Mawada, with nine deaths reported. CAD also contacted the member of the Habaniya Advisory Council who confirmed the fighting but declined to give any details. CAD believes that the number of casualties may be overstated. The involvement of the Reizigat tribe, however, suggests that the conflict may be escalating.

The following day, CAD filed a second report, that mentioned a much lower estimate of 45 fatalities:

On 2 April, CAD Sector South met with a member of the Habaniya Advisory Council. The previous day, CAD had met with a representative of the Fallata. The Habaniya representatives also reported fighting between themselves and the Fallata on 29-30 March, stating that eight people had been killed in fighting in the Mawada and Saigoon areas. The Habaniya indicated that a further 11 people were killed in clashes with the Reizigat tribe in Al Kooka, and that 30 Habinya [sic] fighters responding to a Reizigat attack in Announi that killed two people were ambushed by a large force of Reizigat militia (estimated at 600 strong). In the resulting firefight, 24 were reported killed and 22 wounded. CAD has made a special flight request to visit the area.

Civil affairs officers’ experience indicates that lower fatality figures tend to be more reliable, hence the cautionary note in the first report. Initial reports often conflate fatalities in the most recent fighting with those in a series of incidents preceding it (sometimes aggregating figures over a year or more), or conflate killed, wounded and missing, or are simple rumor or exaggeration. The follow-up investigation by CAD when its officer actually visited the area revised the death toll downwards further (personal communication, CAD South Sector representative).

This particular set of incidents gained particular significance because it was included in the Report of the United Nations Secretary General to the Security Council for April 2009. These reports are drafted at UNAMID headquarters in al Fashir, but are finalized in New York by the Department of Peacekeeping Operations (DPKO). The Secretary General’s April report included the following paragraph:

This implied that the level of fatal violence in Darfur was increasing, at a time when it was in fact decreasing. It is clear by comparing the original sources from the field with the text of the SG’s report, that DPKO had in fact taken the earlier, upper-range estimates (220 deaths) as the guide, and overlooked lower-range estimates (45 deaths) and had not checked with the CAD officer who was trying to find the accurate figure.

The April 2009 report set the stage for an important confrontation between several of the Permanent Representatives to the Security Council, notably the U.S. ambassador Susan Rice, and the Joint Special Representative of the UN and AU and head of UNAMID, Prof. Rodolphe Adada. A mathematician by profession, Adada arrived in New York having pored over the data generated by UNAMID Joint Mission Analysis Centre. He did not share the draft of his presentation to the Security Council with DPKO headquarters in advance of the meeting.

Over the previous months, the U.S. administration had been riven by a controversy over how best to describe the conflict in Darfur. In January, the new United States Permanent Representative to the UN, Susan Rice had said that there was “ongoing genocide” in Darfur.[7]Her stand reflected a long-standing antipathy to the Sudanese government, manifest in her policies pursued while Assistant Secretary of State for Africa in the second Clinton Administration and positions adopted while out of government, including advocacy for military intervention in Darfur.

When Prof. Adada made his presentation to the Security Council on 27 April, he detailed the statistics that UNAMID had compiled—and which, after exhaustive cross-checking against other sources, form the basis for our paper recently published in Social Science and Medicine. In doing so, Adada contradicted the upward trend in violence noted in the SG’s report. He concluded that Darfur at that time represented a “low intensity conflict” and a “conflict of all against all.”[8] There is no agreed definition of, or numerical threshold for, “low intensity conflict” but it is a plausible description of the levels of violence of approximately 1,500 lethal fatalities per year, prevailing at the time. The pattern of killing found in the data, and described in the recent paper, are indeed indicative of a multi-sided and complex conflict.

However, Adada’s description moved Ambassador Rice to anger. In a closed session following the presentation of the reports, she grilled the head of UNAMID on his descriptions, insisting that the Sudanese government remained responsible for an ongoing campaign of genocide. Shortly thereafter, Adada’s contract was renewed for just six months, an unusual decision which he interpreted as a vote of no confidence, and he resigned.

Much has changed in Darfur since 2009. The following figure, provided by the Armed Conflict Location and Event Dataset, shows trends in violent incidents over the last eleven years (battles and violence against civilians combined). 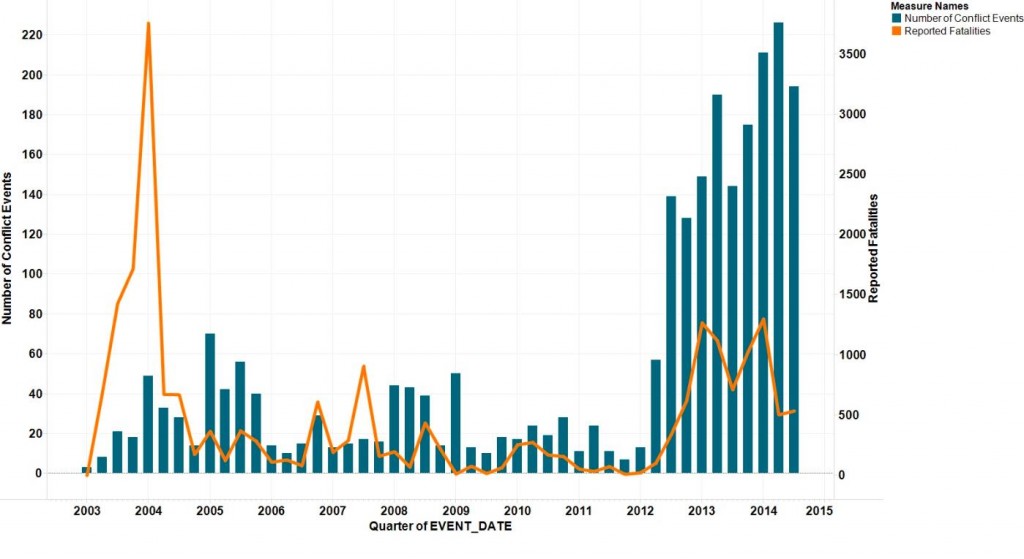 The graph shows the major battles and massacres of 2003-04, the period of lower, spiky violence that followed, and the more recent upsurge in incidents, though without a return to the very high level of fatalities of the 2003-04 war. (The level of media coverage in 2003 and early 2004 was low, so there is good reason to suspect serious under-reporting during that period. Since mid-2004 the coverage has been much more comprehensive.)

However, some elements have remained largely unchanged. The following map shows the plethora of armed actors. 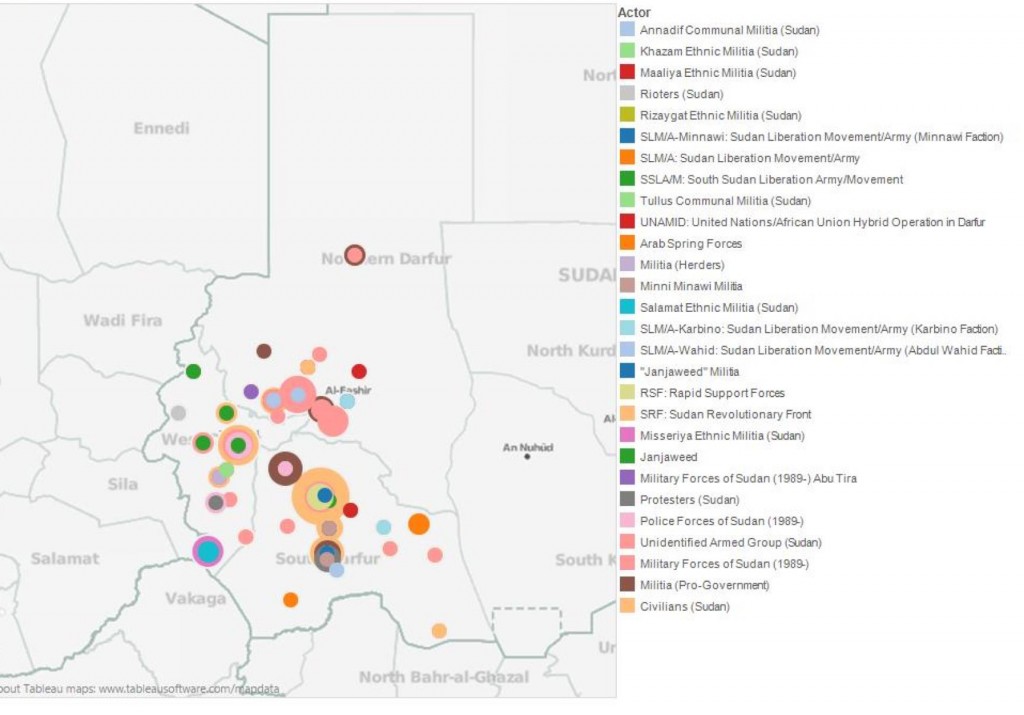 The Humanitarian and Conflict Response Institute at the University of Manchester has recently established a project, “Making Peacekeeping Data Work for the International Community.”

This will facilitate UN peacekeeping operations’ better collection and analysis of incident data, and to make those data available for the kinds of analysis we undertook in the Social Science and Medicine paper. It is an essential initiative.