Kabila: Release the Congolese Activists South Sudan: Who got what? 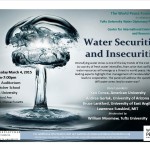 Intensifying water stress is one of the key trends of the 21st century. As scarcity of fresh water intensifies, many fear that conflict over water resources will emerge as a threat to world peace. However, leading experts highlight that historically the management of transboundary waters leads to cooperation instead of confrontation, directly opposing the proposal that wars of this century will be over water. On March 4, 2015, the World Peace Foundation convened a panel of water diplomacy experts to discuss several key questions related to water and insecurity: what are today’s major water stresses? What forms of political contention do they generate? What models for cooperation exist?

William Moomaw hosted the discussion and opened by asking each panelist to identify today’s most significant water security issue. Ken Conca stressed the challenges of human security, noting that hundreds of millions of people lack access to secure water sources and billions more need improved sanitation. Arguing that some progress has been made under the Millennium Development Goals (MDGs) and the proposals on the table in the current negotiations surrounding the Sustainable Development Goals (SDGs), he nonetheless argued that remaining needs are enormous and there are strong links between water-related needs and the more subtle paths towards conflict.

In her response to the question, Naho Mirumachi reframed the question as: water security for whom? Highlighting the case of dam development in the Mekong, Mirumachi stressed that different stakeholders and actors within basins have very different perspectives on water security. The landscape of security or insecurity should not be seen as a homogenous one due to the tradeoffs posed by water development. Bruce Lankford underscored the critical water security issue as the nexus of water, food and energy. Lawrence Susskind noted that water security is most often a function of others’ security or insecurity, therefore, what is required are enforceable agreements between those who can constrain access to water, and which benefit from trust that they will be honored and observed. A key challenge for the future will be to create adaptable agreements that generate trust and compliance.

As the discussion then developed, the panelists add nuance to their responses and responded to queries from the audience that covered a wide range of issues and cases. Responding to a question about the promise of the SDGs to incentivize water security, Conca noted that they are necessary, but not sufficient, to create water security. He called for the SDGs to take a rights-based-approach, saying they can be a useful symbolic frame, but will not be useful unless they result in action on the ground. On embedding a right-based approach into water agreements, Mirumachi emphasized that governments often do not prioritize water, especially in post-conflict zones, resulting in ad hoc economic development that frequently increases water stress.

Reflecting on the case of Brazil including their hydropower development and the current drought in Sao Paulo, Susskind noted that generalizing about water security is problematic due to the local character of most water problems. He continued by arguing in favor of adapting a nexus approach to water, energy and food, while clarifying that developing hydropower potential is not an automatic solution to energy problems. Lankford commented that the middle of a drought is not the right time assess solutions. He added that the link between construction of water storage and development is increasingly being decoupled. Conca called for decentralized, local, approaches to water management and examination of how infrastructure is constructed in an era of increasingly cascading uncertainties.

On water and war, Susskind underscored that water does not lead to war nor is it likely to—a point that the other panelists agreed with– but rather water increases the incentives for cooperation. As evidence, he discussed a recently reached agreement between the US and Mexico over shared water resources in the Colorado basin. While disagreements had lasted for over 100 years, resolution was only recently achieved despite increased scarcity. This was done, he explained, when lower-level actors emerged and provided input on what the agreement should be and that this was then taken to the national-level for agreement. Cautioning that water war is unlikely, Susskind nonetheless argued that cooperation should requires encouragement, noting that the best way to increase water supply is to share water.

The mere fact of having a treaty in place does not guarantee nations will actively cooperate over water resources, Lankford noted. And, Mirumachi, pointed out, post-conflict states may have decreased national capacity for water resources management.

Responding to a question on water security in Central Asia, Conca called for a political conversation about the structure of water agreements, noting that water agreements should not be seen as a pie that can be sweetened by development agencies, as this approach has failed in the past.

Several panelists also noted that there was significant room to imagine the problem differently and find innovative models for how water is consumed and how key actors find ways to cooperate. Lankford called for addressing supply- and demand-side knowledge gaps and for engaging “waterists,” those at the tail ends of water systems who are careful negotiators and understand how to productively use very small quantities of water. Susskind stressed rewards for improved water use. Mirumachi questioned progress for progresses sake, noting that shifts towards consumer-based lifestyles drives increasing water demand. Conca noted the need for changing mindsets from optimization to managing uncertainty. Careful design of stakeholder engagement and dispute resolution mechanisms for water management, Susskind noted, can benefit from informal problem-solving approaches before formal conflict resolution is necessary. Lankford noted the importance of data and the possibility of joint fact finding.

Concluding the program, Moomaw noted that there are multiple insecurities related to the human right to water and water-energy-food nexus issues–highlighting the Mekong and the large-dam-building era in the US as an example of water-related tradeoffs. He underscored discussions on the importance of cooperation, rather than conflict, over water resources, the critical role of data, the possibility of conflict between water sectors and the rights-based approach to water resources. The potential for disagreement will exist into the future and cooperative approaches will need to expand.

One Response to Water Securities and Insecurities: event summary