The end of mass famine? 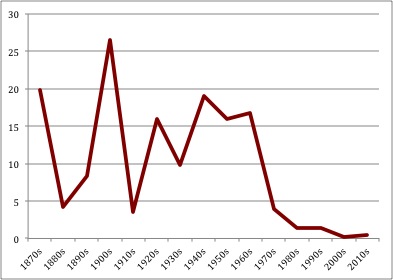 This figure shows the number of people, in millions, who died in major famines around the world (those that killed 100,000 people or more), per decade, from the 1870s to the current day. It is a first approximation from a preliminary dataset, that we will shortly make publicly available.

We are starting a project that will document the patterns of famines and episodes of mass starvation over history, including their causes, locations, and best estimates for the numbers of people who died. Remarkably, this does not appear to have been done before in a systematic manner. Our aim is to bring together evidence for major famines and instances of deliberate mass starvation (related to war and genocide).

The figure speaks for itself: famine and mass starvation is at historic lows. More will follow on our website as we develop the database.