An invitation withdrawn: two Srebrenica dilemmas Do-gooders, do no harm: What are the best–and worst–ways to help those mired in international conflicts?

Four hilltops overlooking the village of Than Daun Gyi in the ethnic Karen areas of eastern Myanmar, provide an insight into the contested politics of the country in the midst of its transition. The rocky promontories are crowned by different symbols of religious, ethnic and political claims. The struggle for the country’s identity can be read in the landscape itself.

Than Daun Gyi is a stronghold of Karen ethnic identity politics. Many of the people of this area are Christians and it was contested by the Karen National Liberation Army, beginning almost immediately after independence in 1948. On the highest hill is a chapel, and the steps up to the summit pass half a dozen small chantries and Christian shrines built by private citizens. 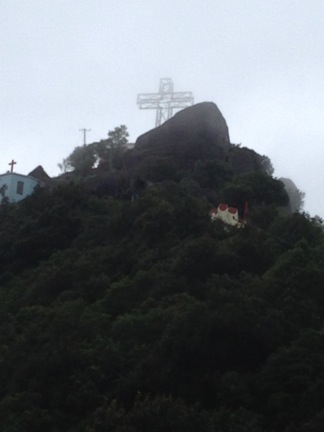 The adjoining summit has a building painted with the Karen national flag, also the symbol of the KNLA. Its red, white and blue horizontal stripes are just visible in the picture below. 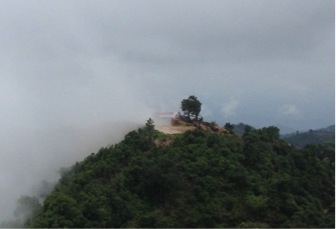 The Myanmar army, the Tatmadaw, has built a road up the mountainside and established an army camp overlooking the village. On the edge of the base is a newly-build pagoda, symbolic of the state-Buddhism of the central authorities: its profile redolent of the famous Shwedagon in Yangon and its contemporary copy, almost the same size, in the new capital Naypyitaw. 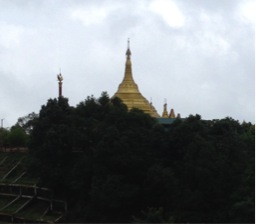 Also within the army base are prominent statues of Burmese historical heroes—two kings and a warrior—symbolizing the military power of the state and its Buddhist identity. Building the statues’ massive plinth must have involved bulldozing a large part of the mountainside itself. 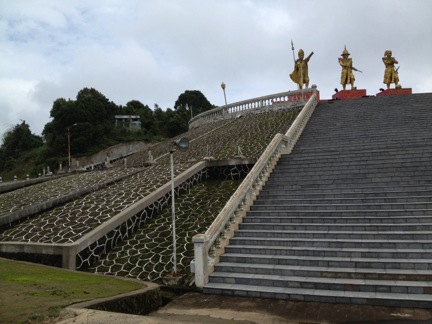 Almost hidden behind the three giant statues is a small shrine to four local spirits, known as Nats. It is just visible in the top left of the picture. The shrine was built and is carefully maintained by local folk Buddhists. Three little shrines to the Nats are in one structure, and the fourth is opposite, its back to the three huge warrior kings. They are shown in the two pictures below. 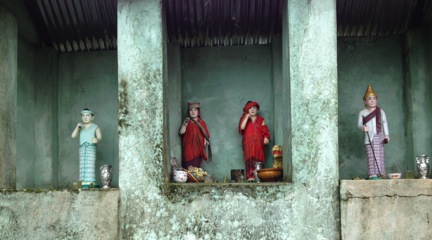 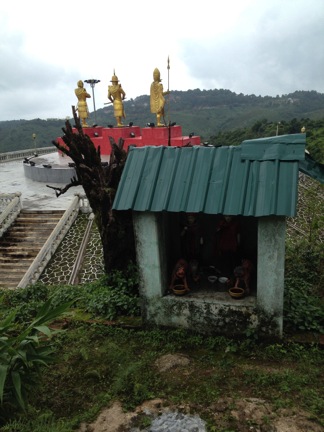 One Response to Symbolic Contests on Myanmar Hilltops