Mandates or Blind Dates? War is security is peace: President Obama’s ‘new beginning’ with the Muslim world and the Nobel Peace Prize

Eisenhower on “our charted course”

In his final address to the American public as President, on January 17, 1961, Dwight D. Eisenhower famously warned of the rise of a military-industrial complex and the threat it posed to what he saw as the ultimate goal of U.S. foreign policy, peace. Eisenhower’s insights emerged from his intimate knowledge of war, drawing on his prestigious career as a military professional, during which he served as commander of the Allied invasion into North Africa in 1942 and the Normandy Invasion in 1944, military governor of the U.S. occupied zone following Germany’s surrender, and as the first NATO Supreme Allied Commander. Eisenhower valued the goal of peace and realized that its priority as a guiding ideal for U.S. policy was undermined by a set of interests that were being cemented and expanded in the Cold War climate. He described the potentially distorting impact on U.S. policy—not only by intricate design but also “unsought” as ideology, interests and profit converged around militarization:

In the councils of government, we must guard against the acquisition of unwarranted influence, whether sought or unsought, by the military-industrial complex. The potential for the disastrous rise of misplaced power exists and will persist.

The farewell speech did not address the most important domestic issue of his era: simmering social conditions in the United States, particularly the increasing expression of anger and frustration within African-American communities that had suffered brutal and unequal treatment for too long. A legalist, when the Supreme Court forced his hand, Eisenhower called in troops to see that the decision to de-segregate schools went forward, but it was not an issue he personally championed.

Instead his speech focused on foreign policy, and it included a nod to Congress that, in today’s climate, reads like fiction:

the Congress and the Administration have, on most vital issues, cooperated well, to serve the national good rather than mere partisanship, and so have assured that the business of the Nation should go forward. So, my official relationship with the Congress ends in a feeling, on my part, of gratitude that we have been able to do so much together.

His words did not betray his fears, expressed in an earlier draft of the speech, that Congress was a fundamental part of the military-industrial complex,[i] a problem that has not diminished with time. For instance, in recent years, pork-barrel earmarks purchase military equipment even the military doesn’t want, including ships, tanks, and many other items. And these are just programs that Pentagon insiders think are wasteful, see the Project on Government Oversight (POGO) and the Special Investigator General for Afghanistan Reconstruction (SIGAR) as two among many voices drawing attention to broader areas of DoD waste.

Waste, however, was not Eisenhower’s foremost concern when he drew attention to the military-industrial complex. Rather, he was concerned with the distortion of interests that skewed the focus of U.S. foreign policy.  For him, peace was the measure of how American power and influence are wielded in the world. He stated:

America’s leadership and prestige depend, no merely upon our unmatched material progress, riches and military strength, but on how we use our power in the interests of world peace and human betterment….to strive for less would be unworthy of a free and religious people.

This was not his first foray into the question of peace, having sought to de-escalate tensions with the USSR, a task made easier with the death of Stalin in 1953, and proposing “Atoms for Peace,” a program that sought to develop nuclear capacities for non-military uses, like energy. However, the speech was perhaps his most powerful articulation of an internal threat to peace. 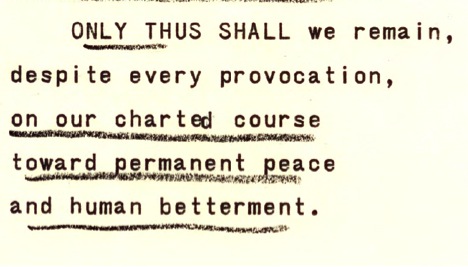 Against the backdrop of the Cold War, and drawing on his own experience as a senior military officer who knew well (qua Clausewitz) that concerning the outcomes of any military action, the ratio of the unpredictable to the predictable is high, Eisenhower stressed that the “danger promises to be of indefinite duration.” To meet it successfully, the U.S. did not require the “emotional and transitory sacrifices of crisis,” but rather steady leadership and the political art of balancing interests, such that trade-offs between the present moment and the future, competing sources of power, and cost and advantage would be carefully weighed. While crises will certainly continue, he cautioned, one must avoid the temptation to seek “spectacular and costly action” in the hopes of forging some sort of miraculous conclusion.

Threatening to upend such a careful balance was the emergence of a permanent military industrial sector, unprecedented in American history. In the context of the Cold War, these words referenced the uninterrupted development of major weapon systems and the way in which the economic benefits of their procurement influenced political life.

This threat remains with us. As example, today military spending so outrageously outpaces the civilian capacities within U.S. foreign policy, that a catch-22 develops[ii] whereby existing capacity means the military takes on ever more tasks—like humanitarian aid delivery, development programming, global public health, and intelligence, simply because it is so much better resourced and hence more capable, and hence is further invested in. For instance the 2016 budget deal, allocated $573 billion for defense and another $58.6 billion for overseas contingency (war effort).  The State Department and USAID – whose combined budgets were $50 million — are caught in a cycle of underfunding, with reduced capacity and influence. Today, the US military is an enormous global logistics system dressed in camouflage. Those engaged in war fighting, who know the deep cut of violence, compose only a tiny sliver of its overall personnel: of the 1.53 million total active duty US military personnel, some 450,000 are stationed overseas, and this is in addition to 811,000 reserve component end strength, and 773,000 civilian full-time equivalents.[iii] These figures do not include contractors, who play ever increasing roles both in and out of active combat. As a country, the United States has failed to invest in its diplomatic mechanisms for peaceful resolution of conflict, and instead prioritizes the militarization of all functions of its international relations.

What is more, the “Global War on Terror” extends and expands the threat Eisenhower identified. In a “war” that alternates between active combat, often-intangible battles with ideology, and discrete, secretive actions, the congressional-military-industrial complex has further evolved and more profoundly threatens peace. In addition to the skewing factor of commercial and political interests in large-scale weapon systems, tilting the balance of democratic practice further away from the interests of peace is the expansion of securitization and intelligence. We must now speak of a security-intelligence-military industrial complex, which ebbs away at transparent democratic practices.[iv]

Eisenhower, who spoke with the insight and authority of a man who personally knew war too well, stated:

Disarmament, with mutual honor and confidence, is a continuing imperative. Together we must learn how to compose differences, not with arms, but with intellect and decent purpose. Because this need is so sharp and apparent I confess that I lay down my official responsibilities in this field with a definite sense of disappointment. As one who has witnessed the horror and the lingering sadness of war — as one who knows that another war could utterly destroy this civilization which has been so slowly and painfully built over thousands of years — I wish I could say tonight that a lasting peace is in sight.

Today we have many fewer politicians with military experience, and neither of our two major choices for President have so bravely put use of force in its proper place, subordinated to political solutions sought through diplomacy, and in the service of world peace. Nor can we today conclude, as Eisenhower did, that despite failings in the pursuit of peace that “war has been avoided.” We live in a time when war is no longer a state of exception; it has emerged from behind its shadow of illegitimacy and is lauded as patriotism par excellence by those who do not suffer its impact.

Image from the Reading Copy of the Speech, available through the Dwight D. Eisenhower Presidential Library Museum and Boyhood Home https://www.eisenhower.archives.gov/research/online_documents/farewell_address.html

[i] See, Evan Thomas, who writes: “Staff Secretary Andy Goodpaster routinely recorded Ike’s gripes about the coziness between defense contractors and congressmen. Goodpaster later said that Eisenhower would have referred to the ‘military-industrial-congressional complex,’ but left out Congress ‘out of respect for the other branch of government’” (399), in Thomas, Evans. 2012. Ike’s Bluff: President Eisenhower’s Secret Battle to Save the World. Boston: Little, Brown and Company.

[ii] See Rosa Brooks.2016. How Everything Became War and the Military Became Everything: Tales from the Pentagon. New York: Simon & Schuster.

[iv] See Michael Glennon. 2014. “National Security and Double Government,” Harvard National Security Journal 5: 1 – 114. Addressing the stability and continuity of national security policy across the Obama and Bush administrations, Glennon argues: “America’s ‘efficient’ institution (actually, as will be seen, more a network than an institution) consists of the several hundred executive officials who sit atop the military, intelligence, diplomatic, and law enforcement departments and agencies that have as their mission the protection of America’s international and internal security… The United States has, in short, moved beyond a mere imperial presidency to a bifurcated system—a structure of double government—in which even the President now exercises little substantive control over the overall direction of U.S. national security policy.”

Share
Tagged with: global war on terror • peace • US Presidents