War is security is peace: President Obama’s ‘new beginning’ with the Muslim world and the Nobel Peace Prize

Perhaps a minimum definition of peace (‘negative peace’) is the absence of war. Everywhere? In most of the world? Between states? An end to civil war and violent repression? The eradication of weapons of war? Could the USA, as a supreme global hegemon, help keep the peace by policing wayward states in the tradition of Pax Romana?

Even if we could agree on an answer to this first question, the answer to the second is even more difficult. Should we evaluate presidents on the basis of their stated desire for world peace? Or should we expect their actions to be consistent with their rhetoric? Is it enough to be consistent some of the time? President John F. Kennedy is remembered as a young, idealistic president who averted a world war, despite his failure to adhere to pacifist ideals in Vietnam and Laos.

President Obama’s early speeches seemed to try and answer these foundational questions. American power is an instrument of peace, Obama seemed to argue. Security is necessary for the maintenance of this power. To achieve security, however, one has to wage war. In his view, therefore, security and peace are not competing choices: American security is a necessary precondition for peace.

Barack Obama became president on 20th January 2009, elected, almost as an antithesis to his predecessor; one of his stated foreign policy goals was to end the wars in Iraq and Afghanistan. In this vein, and barely six months after becoming president, Obama gave a speech at Cairo University, where he called for a ‘new beginning’ in America’s relationship with the Islamic world. 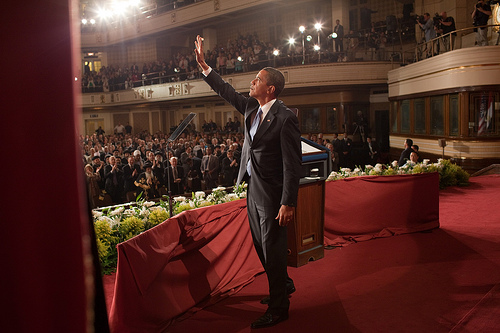 In many ways, it was a thoughtful and courageous speech. He spoke about his own history of growing up in Indonesia, of Muslims in his own family, and of the debt that the world owed to Islamic civilization. He was even-handed: he confessed American culpability for past misdeeds, yet criticized those who would demonise the USA.  He signalled a commitment to ending the Israel-Palestine conflict, and to closing the prison at Guantanamo. He praised democracy, while promising to respect existing systems of government. Yet, above all, he reaffirmed his commitment to American security.

“…In Ankara, I made clear that America is not — and never will be — at war with Islam. We will, however, relentlessly confront violent extremists who pose a grave threat to our security — because we reject the same thing that people of all faiths reject:  the killing of innocent men, women, and children.  And it is my first duty as President to protect the American people.

The war in Afghanistan, Obama claimed, was a necessity:

“…make no mistake:  We do not want to keep our troops in Afghanistan.  We seek no military bases there.  It is agonizing for America to lose our young men and women.  It is costly and politically difficult to continue this conflict.  We would gladly bring every single one of our troops home if we could be confident that there were not violent extremists in Afghanistan and now Pakistan determined to kill as many Americans as they possibly can.”

After the speech, a blogger wryly noted: ‘Obama devoted twice as much time to ‘violent extremism’ as to democratic governance.’

Later, that very year, Obama was awarded the Nobel Peace Prize, almost in anticipation of what he was going to achieve. He acknowledged this in his acceptance speech (watch it here), where he clearly outlined his vision of American security and world peace. His peace prize speech was almost entirely devoted to a justification of war, and the role played by the USA in underwriting global stability since the end of World War II. To continue playing this role, Obama seemed to argue, the USA must first be secure.

“We must begin by acknowledging the hard truth: We will not eradicate violent conflict in our lifetimes. There will be times when nations – acting individually or in concert – will find the use of force not only necessary but morally justified…

I face the world as it is, and cannot stand idle in the face of threats to the American people… To say that force may sometimes be necessary is not a call to cynicism – it is a recognition of history; the imperfections of man and the limits of reason.

Whatever mistakes we have made, the plain fact is this: The United States of America has helped underwrite global security for more than six decades with the blood of our citizens and the strength of our arms.”

These were, of course, early days in Obama’s presidency. The ‘surge’ in Afghanistan had only just been announced, while the Libyan intervention, the Arab Spring and the disenchantment that followed lay in the future. Obama had still not had to engage with ISIL, the catastrophic civil war in Syria or resurgent violence in Iraq and Afghanistan. He had not expanded a program of targeted assassination by drones. Through all of these, however, Obama’s policies have largely adhered to the principles laid out in to these speeches. Absolute peace is not achievable, Obama has said. Yet even an imperfect form of peace requires American power and leadership (in other words, hegemony) to be ‘secured’ first.

Security[1] has become the overwhelming framework of governance in the 21st century, and in fact, much has been written about how the power of fear drives social relations in the world today (Goldstein 2016; Goldstein 2010). The need to bolster American security has been used as a justification for armed intervention abroad, as well as the domestic erosion of civil liberties. For Obama, however, security serves a slightly different purpose: it is an instrument for the maintenance of American power and exceptionalism. Peace may follow.

Obama is a thoughtful and pragmatic leader, and he has tried to define security interests narrowly, but a decision-making framework which defines power and security as necessary for peace can be self-defeating. The difference between Obama’s foreign policy and that of his predecessor is one of degree, rather than substance. Their policies diverge on how much (and where) war needs to be waged to secure American power. As a result, and despite the hope and expectation (and anti-war tenor) around Obama’s election, he is likely to leave office as the only American president who has spent the entirety of his two terms at war. In Cairo and in Oslo, he hinted at this co-option of peace into the American security project; whether the world will remember him fondly for it remains to be seen.

[1] Here, I understand security to mean the broader practice and narratives around real or perceived threats: how are certain issues characterized as threats to national or global security, and what responses become permissible because of such characterization? An excellent example is the recent Ebola outbreak in West Africa: characterizing an infectious disease as a global/national security threat allowed the deployment of militarized responses, which arguably had little to do with solving the health crisis.

Share
Tagged with: global war on terror • peace • US Presidents