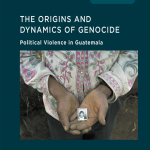 At what point and for what reasons does political violence evolve into genocide? When, if at all, does a genocide end? Does post-conflict violence constitute a legacy of genocide or its continuance? On September 15, 2016, the World Peace Foundation hosted a presentation of Dr. Roddy Brett’s new book, “The Origins and Dynamics of Genocide.” Brett focused on these questions, arguing that in Guatemala, the period of heightened lethal violence (1981 – 1983) needs to be understood within the longer context of oppression of the Maya population which began before and continues thereafter. Building on over a decade of ethnographic research in survivors’ communities, Brett documents the historical processes that shaped the genocide and analyzes the evolution of both counterinsurgent and insurgent violence, how this violence has impacted the civilian population, and the survival strategies that civilians adopted.

Brett began his presentation by highlighting the underlying conditions that make the evolution of political violence into genocide possible, including the intensification and normalization of violence over time. This, he argued, combined with the strategically enforced, racist narrative of Guatemala’s indigenous population as “the other,” created pre-genocidal conditions that paved the way for the escalation of violence. Ideology mattered, Brett argued, and the framing of the indigenous population as “irredeemable” played a key role tipping the scales of political violence into genocide.

Uninhibited violence became the norm, Brett argued, for several reasons. First, Brett argued that political violence was an extension of the failed nation-building project, wherein the goal was to homogenize society in a way that eliminated the existential threat presented by the indigenous population. Second, organized violence was introduced to continue the pursuit of this goal when nation-building failed. Racism structured the uses of violence, in which the state-sponsored “us vs. them” ideology led perpetrators (the Army and forces associated with the state) to morally disengage from the violence and further dehumanize the indigenous population.

Brett moved on to address issues surrounding the indigenous population’s experience of the genocide. While the overwhelming experience across indigenous communities was of being directly targeted for violence, they were also involved in resistance to the State as well as participation in state-sponsored violence. Some indigenous communities and individuals collaborated with or tolerated guerilla groups. Likewise, some were pushed to participate in violence organized by the State out of fear, or as a way to protect themselves and their families.

Finally, Brett argued that although the period of heightened lethal violence ended in 1983-84, the effects of the genocide—which he described as a continuance– are experienced by the population to this day. As example, he discussed the trial of Rios Montt and truth telling mechanisms. The fact that such procedures have occurred marks a triumph as these endeavors have the power to interrupt elite narratives of the genocide and make room for healing among victimized populations. However, the higher court’s decision to overturn the Montt conviction, Brett argued, constituted a validation of the genocide and represents the perpetuation of structural violence against the indigenous population. The trial annulment and continued destruction of indigenous communities through indoctrination programs represent manifestations of the genocide’s continuity in the present and are a type of “silent, invisible murder.”

Brett concluded his remarks by focusing on the process of reconciliation. He noted that while peace processes sometimes have the ability to “telescope” nation building outcomes—that is, to accelerate the pace of political change– one cannot “telescope” the issues at the heart of transitional justice. The disconnect between human emotions, violence, and the peace-building process is particularly acute when victims receive no effective recognition from the state. This constitutes a “second injury” wherein people feel that, despite the progress on paper, “everything remains the same.”

Brett was joined by Dr. Kimberly Theidon, whose research addresses political violence, transitional justice, and the politics of post-war reparations, for a discussion. Her questions teased out nuances of his arguments and highlighting the destructive nature of impunity, the roles played by indigenous soldiers in carrying out massacres, and the strategic use of gendered violence in the Guatemalan genocide.

Theidon highlighted the role of impunity in “making genocide thinkable.” Brett reiterated that impunity helps validate violence, and that both legal and social impunity played a role in creating the pre-genocidal conditions in Guatemala. Another contribution to these pre-genocidal conditions, thought Theidon, was the continued support, both financial and ideological, of the Guatemalan government by the United States. Brett agreed and noted that, within the national security framework, U.S. funding, training and political support Guatemala enabled and provided cover for the escalation of violence.

Theidon echoed some of Brett’s remarks on the participation of indigenous men in the genocide, but specifically questioned the role of sexual violence played. She noted the relationship between violence against women, seen as the keepers and reproducers of culture, and the cultural and biological racism against indigenous peoples. In his response, Brett noted the role dehumanization played in making such violence possible, and that sexual violence, particularly rape and forced sterilization, was a pointed part of the campaign of both physical and cultural destruction of indigenous people.

Finally, Theidon questioned the definition of genocide- is it a process with a clear beginning and end or does the perception of its continuance among the indigenous population warrant the use of different or altered terminology? Normative frameworks and definitions can evolve, Brett argued, and it is worth asking if today’s definition is adequate considering how the effects of genocide are still felt generations later by indigenous Guatemalans.

Following Theidon’s discussion with Brett, the event opened up to include questions from the audience centering on reconciliation, the motivations of indigenous soldiers, and the debate between legacy and continuity. Brett took this opportunity to re-emphasize the need for true reconciliation—which he defined as an honest dialogue between perpetrators and victims— which has not occurred in Guatemala. He reiterated that the continuing and evolving effects of the genocide still reverberate through Guatemalan society today. Even if people don’t go to prison, he argued, different types of justice must begin to address the root causes of the conflict for any future successful reconciliation to occur.