The danger of researching ‘in silos’: lessons from the Chinese famine of 1876-9

As a researcher, it is easier to replicate the work of scholars who have already worked on a subject, than to come up with original research. This is, of course, self-evident, but it is a trap that is surprisingly difficult to evade. I learned this the hard way, when researching the Chinese famine of 1876-1879.

The World Peace Foundation’s research project on famine trends had emerged from a simple contradiction in prior famine research:

“Too often, famines and mass atrocities that involve forced starvation have been studied separately. Specialists in food and agriculture tend not to analyse war and genocide. Scholars of mass atrocity focus on violent killing, and have not analysed mass death from the perspective of starvation and disease. International criminal prosecutors have concerned themselves with direct violence—murder, torture, and rape—avoiding the question of culpability for starvation.” (de Waal 2015)

The idea behind the project was to create a dataset recording two overlapping events: the first was the incidence of ‘great famines’ since 1870, that is famines which caused more than 100,000 excess deaths (Devereux 2000), and the second, drawing on work by David Marcus (2003), was to record the incidence of armed conflict during these famines and the use of deliberate mass starvation in these conflicts. I was, therefore, interested in the mortality from the famines as well as the political context in which famine occurred. 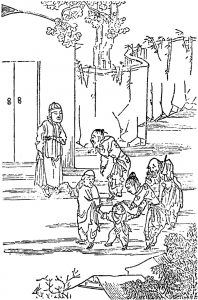 Image: Victims of the famine forced to sell their children from The Famine in China (1878)

Imperial China had a long history of famines and disasters, but the North China Famine of 1876-9 was its most lethal. Drought struck China’s five large northern provinces in 1876, and by the time the rains returned, an estimated 9-13 million people had died of starvation or famine related diseases (Edgerton-Tarpley 2013). A number of scholars have written about this, and they only seemed to refer to conflict in passing (Edgerton-Tarpley 2008; Li 2007; Davis 2001), and it seemed that state incapacity was the primary reason hampering famine relief (Fuller 2015). I recorded the numbers, but did not look deeper.

At the first presentation of the dataset at LSE in London, the way I had coded the 1876-9 famine was challenged. A member of the audience argued that there was active armed conflict in China at that time. Chastened, I returned to the library and found that real picture was complicated, and while I was not completely incorrect, neither was I completely correct.

Famine was preceded by periods of colonial conflict with Japan, England and Russia. Further, China’s north-western frontier had witnessed conflict: the region now known as the Xinjiang-Uighur Autonomous Region had been occupied by Russia in 1871, and then had been the center of various localized revolts. The perception of colonial threat and conflict led the Qing Court to allocate scarce resources to the construction of coastal defences rather than famine relief, and although this changed as the famine worsened, the damage was done. These added to the difficulties of coordinating famine relief and transporting the available grain (Edgerton-Tarpley 2013).

My initial research had fallen into the very trap that the broader research project was intended to address; by looking at the famine as an isolated incident, I had missed the broader political context in which the famine had taken place. Expanding the scope of my research to include a diversity of sources helped me understand this.