Kleptocracies are bad. A kleptocracy going bankrupt is dangerous. The Enough Project should know better than to advocate it.

One of the causes of the genocide in Rwanda was that the kleptocratic government of President Juvenal Habyarimana lost the resources it needed to maintain its centralized patronage system. In the disordered competitive politics that followed, his party and others turned to violent political mobilization. 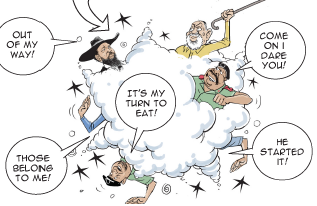 South Sudan was a modestly functional kleptocracy from the signing of the Comprehensive Peace Agreement in 2005 until the financial crisis unleashed by the suicidal decision to shut down national oil production in 2012. The kleptocratic system of rule laid the foundations for crisis. But it was bankruptcy, and the resort to violent dispute over a shrinking patrimony, that unleashed the civil war. [See my Occasional Paper on South Sudan, which explains the extreme perils of a collapsed political market].

Under President Ali Abdalla Saleh, Yemen was a highly complex political market, centrally manipulated. It maintained a modicum of order. When fiscal crisis hit, for multiple reasons, the president lost the grease he needed to keep the wheels of kleptocracy turning, and the country plunged into crisis.

I could go on: the slide into civil war in Sudan in the 1980s, the collapse of Somalia in 1990-91, the electoral violence in Kenya. I describe cases and mechanisms in my book, The Real Politics of the Horn of Africa.

The most dangerous moment in a kleptocracy is the slide into insolvency. That’s when its rulers (political business operators) become desperate and willing to contemplate extreme measures.

Part of the reason why Enough has got it wrong is that it uses a simplistic definition of kleptocracy as the rule of thieves. A more sophisticated definition is a system of government in which the laws of supply and demand determine the allocation and use of public office. Another reason why Enough misleads is that its starting point is not the problem itself (the complex dysfunction of countries like South Sudan) but the tools that the U.S. government can bring to bear.

Kleptocracy—in both senses of the word—is a serious problem that needs to understood and resolved. Addressing corruption is a serious issue that needs a serious response. But Enough’s idea that driving these systems to bankruptcy is wrong and dangerous.

2 Responses to Bankrupting Kleptocracies is a Dangerously Bad Idea