Trump and the Deepening Refugee Crisis A toast for the new year, part 2 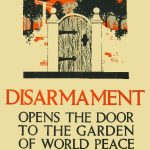 A toast for the new year, part 1

As we near the end of 2016, we are offering a toast for the new year, through excerpts from authors worked for peace and social justice in the early twentieth century, broadly around the time of the founding of the World Peace Foundation (1910).  Their work is not necessarily a blueprint for ours today, not only in how the problems were defined but also in its membership and the articulation of solutions. For instance, the international peace movement  was dominated by voices of people of European descent, whether resident in Europe or North America, a limitation in its imagination and scope. Nonetheless, their eloquence, even as they struggled for a cause that at times seemed hopeless, remind us that we are part of larger community historically and today committed to building more just and less violent world.

Today we begin with excerpts from two speeches drawn from the World Peace Foundation’s archives. First is an address by Lawrence Lowell, “America’s War and America’s Opportunity,” delivered at the meeting of the National Safety Council on September 12, 1917 (published in “A League of Nations,” Vol.1, No.1 The World Peace Foundation, October 1917, 5 – 7).

Every great catastrophe turns out thoughts to the realities that underlie human life. We are moved to ask ourselves what is superficial and what is eternally true. What our efforts and our principles signify. Whether we are like butterflies, getting what pleasure we can from sunlight and flowers, living a life of instinct, and dying when the least danger overtakes us; or, whether our lives should mean the building up of moral principles that shall make life nobler, better and happier, not chiefly for ourselves, but for those who shall come after us. As we look back over the long stretches of history we feel sure that the men who taught higher morals, enlarged the bounds of human sympathy, and did heroic deeds, have permanently enriched and ennobled human life. Where do such thoughts lead us in entering the present war?…

For centuries we have been working slowly upward, with many obstacles from ignorance, from prejudice, from shortsightedness, from selfishness, individual and co-operative; but all with striving toward a better justice, more mercy for the unfortunate and the oppressed, keener sympathy with suffering, and a fuller respect for the right of every man, woman and child to be treated, not as a mere tool in the social workshop or a pawn in the great game of national ambition, but as an end in himself, whose happiness, whose material—and above all whose moral—welfare should be the aim of civilization. We are very far, as yet, from having achieved such a result, but this is the direction in which the best men have been striving to move.

No vast upheaval that lays bare the foundations of human society can pass away and leave things as they were before. Geological convulsions way destroy the soil formed by ages of silent growth and thickly falling leaves, replacing it by a barren waste; or they way heave upward veins of coal and ore or precious stones that, unsuspected, lay deep below the surface. This war cannot leave the world as it was before… it may mean a better world, re-organized on a basis of justice and peace; and much of the result may depend upon us, both in the field and at the council table.”

“Much of our civilization both material and institutional lies in ashes today as the result of the great war. The choice is ours: to let the old evils with their ensuing certitudes of conflict and misery grow up as before, or to refashion civilization to finer, more ideal uses. We lack neither leaders nor ideals. Much of the best thought of the world has pointed the way for us. The danger lies in delay. If we wait until the old habits and beliefs bind us again, until the ardour of unselfishness has cooled… and the spirit of sacrifice in life and goods has become again the spirit of gain and greed—then we must thereafter be content with the slop and groping progress that emerges from the conflict of narrow and blind forces. We have today an opportunity such as no one of us will ever see again. It is ours to seize and mould the destinies of nations so that war will be forever impossible; and so to refashion the social order that justice and beauty may come to be where now are economic slavery and misery….

War in itself and the sacrifices of war are an umixed evil. But it is the law of life that out of evil may come good, out of death life, out of a warring world the brotherhood of man—if we choose to have it so.

The task for the citizen is to think as clearly as he can and to feel as deeply and purely… We have to devise a world in which war shall be impossible, a question, it would seem, of international relations purely, of Hague courts, and an international police….

We must solve the paradox of a co-operative society which yet respects individual rights, in which the individual gives himself to the services of the state but retains his share of state control and receives in doing so a greater measure of freedom for development of his powers, for self-realization, than he now possesses.”