“You shape the truths you have access to”: Why a conflict sensitive approach matters Peace and the security sector in Sudan, 2002–11

Book review: How everything became war, and the military became everything – Rosa Brooks

In this fascinating, occasionally frustrating, book,  Rosa Brooks examines the blurring of the boundaries between war and peace that has evolved over the past 25 years, especially, though not entirely, as a result of 9/11. Bringing to bear a rather unusual combination of perspectives—daughter of peacenik activists, international law professor, former DOD staffer, and special forces wife—she digs down deep into the implications of these trends for human rights, rule of law, and the nature and mode of operation of the military and the state.

The book covers a dozen different topics—from piracy to Guantanamo to drones to secrecy to anthropological study of the war practices of different tribes (including the modern US military) to the military’s role as ‘nation-builder’, digging wells, building schools, and training judges, to cyber warfare, to the development of international humanitarian law—a breadth that is one of the reasons it can be frustrating at times. Nonetheless, there are really two big, interlocking, themes: what are the implications of the (US) military being asked to take over more and more different roles, as missions become more complex and civilian agencies more underfunded; and the breakdown of traditional rules governing war and peace that are involved in US counter-terrorism policies since 9/11. How should we handle this ‘inbetween space’ between peace and war that the ‘war without end’ against groups such as Al Qaeda and ISIS represents, and how can rules be developed for this new, ambiguous, world order?

Using tales from her two years at the Pentagon as an advisor to under-Secretary of Defense Michelle Fournoy, Brooks takes us through some of the absurdities she encountered, many the result of an ever-expanding set of military missions and an overgrown DOD that dwarfs all civilian counterparts, as well as the inherent chaos and messiness of the situations the US got itself into in Iraq and Afghanistan. Military units attempting to conduct development aid or train judges, causing consternation among the civilian practitioners who are the actual experts at these things, but who lack the resources to do it—thus leaving the military as the only game in town.

But the more serious issues come when she discusses the US practice of drone warfare. This is perhaps the most pressing example of the ‘inbetween space’ between peace and war. How should the US (or other countries) deal with situations that are not ‘active battlefields’ where US forces are fighting, but where there are individuals who are part of armed groups, and who are believed to be planning acts of serious harm to the US, and who are based in poorly governed areas where the national authorities can’t (or won’t) arrest them? The practice of assassination by drone strike was started by Bush, but greatly expanded by Obama, although he later restricted their use, in particular ending the practice of ‘signature strikes’ that target people on the basis of patterns of activity that supposedly suggest likely involvement in terrorist groups, and which added significantly to the civilian death toll. What approach the current Administration will take, remains to be seen, but there are already indications that Trump is seeking to expand drone strikes and loosen controls.

With her expertise in both the legal and defense spheres, Brooks forensically dissects the legal and moral arguments used by US administrations to justify such drone strikes, showing clearly, and terrifyingly, how the US executive branch has essentially set itself up as judge, jury and executioner in such cases, with no transparency or accountability around who is condemned to death, or why.

However, Brooks argues that the position of anti-drone, and more broadly anti-war-on-terror commentators—essentially, that terrorist acts should be considered within the paradigm of crime and criminal law, rather than of war, is unrealistic. This genie, she believes, is just too far out of the bottle. Indeed the realities of the current security situation have become too blurred and complex to sustain such an absolute boundary between the worlds of war and of peace, in which completely different laws, standards and practices exist.

Her favorite metaphor, and teaching aid, is the ‘duck-rabbit’: 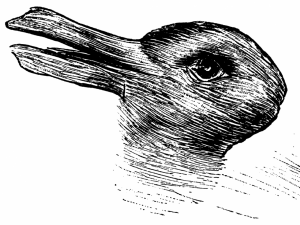 Is this a picture of a duck, or of a rabbit? It can be viewed as either. Seen in the midst of a flock of ducks, it will be seen clearly as a duck, but seen among a group of rabbits, it will be seen as a rabbit. Similarly, many contemporary security issues can be seen in the context either of war or crime, or both, depending on context.

Her tentative answer to this quandary is that we need to acknowledge the existence of inbetween spaces, of a spectrum between peace and war, and develop laws, rules and procedures to deal with them, allowing the US and other countries to act effectively to protect their citizenry, while properly constraining the power of the executive over life and death, perhaps bringing in some measure of judicial oversight into extra-battlefield drone strikes.

I am left somewhat uneasy by this line of argument. It still means that the US would be taking upon itself the right to pass and execute death sentences on individuals, who would have no direct right of appeal or representation, who may not even know that they are on trial for their life. They may be plotting acts of harm, but they are not pointing a gun at someone, forcing an immediate life or death decision. There may be many steps between their plotting and the eventual execution of the planned terrorist acts whereby these acts can be prevented. Is the right to carry out such strikes one that applies to other states as well, or only to the US? (a major question, which Brooks discusses, in the chapter on ‘car bombs and radioactive sushi’.) Are Russia, China, Syria, etc. entitled to assassinate ‘terrorists’ who cannot be apprehended by law enforcement processes? (Provided they put in place robust rules and procedures constraining the executive).

Besides, while it may appear inevitable that the policy of drone strikes will be continued, is there actually any evidence that it is doing any good, that it is stopping more terrorist acts than it generates, through its effect on terrorist recruitment? The evidence so far appears to be at best ambiguous. In calling for better laws and institutions to govern such ‘inbetween space’ acts of killing, might one not be merely lending credence to a policy that is both morally dubious and practically ineffective?

What is certain is that these questions need addressing soon. A case in point is that of journalists Abdul Maffaq Zaidan and Bilal Abdul Kareem, whose lawyers have filed a case with a DC District Court, alleging that the two have been placed on a ‘kill list’, and demanding that they be taken off it. They allege that the two have been target as a result of the US Skynet surveillance program, which tracks geolocation and social media data to identify potential terrorist threats: catching Zaidan and Kareem in the course of their work as journalists, reporting from war zones and interviewing senior figures in terrorist organizations. Kareem has already been targeted by three failed drone strikes, while Zaidan only knows he is on the ‘kill list’ through a leaked Powerpoint presentation. This may be one of the first tests as to whether it is possible for the judicial system to exercise meaningful oversight of drone warfare.

Her provisional answer to the problem of military overreach is likewise to embrace the ambiguity – since the military seems to be the only agency to which Americans are willing, by a broad consensus, to direct money, let’s change the nature of the military in a way to make it more versatile and able to carry out such non-traditional missions. A military that is, in effect, also a civilian agency.

If I may be permitted briefly to indulge my geekery, this calls to my mind Star Trek, where the United Federation of Planet’s Starfleet appears to have such a dual military-civilian role: they are the Federation’s armed forces, but they also carry out diplomacy (including the all-important ‘first contact’ with new species), scientific exploration (boldly going where no-one has gone before), provide logistic support to civilian activities, humanitarian assistance, and so on. There is little evidence of any Federation Department of State or Defense to provide civilian oversight to Starfleet Command. It is a model that seems to work well, but then the Federation is also something like a Socialist utopia, where technological and social progress have eliminated poverty, money is no longer used, and work is for self-fulfillment rather than economic necessity. Is a properly funded State Department really so much harder to imagine than a military transforming itself into an effective diplomatic and humanitarian corps?

I suspect that Rosa Brooks is herself far from certain of her policy prescriptions: they are a tentative attempt at responding to a complex, rapidly-changing world. She is certainly posing the right questions, and doing so with a sharpness of focus and analysis that is rarely seen in this area, which is very prone to over-simplification.

What also makes this book extremely worth reading is Brooks’ writing, which is at the same time, political, analytical, and personal, and which combines wry humor, sharp analysis, and real humanity, flipping from the hilarious to the heartrending at the turn of a page. Highly recommended.

How everything became war and the military became everything, by Rosa Brooks, Simon & Schuster, August 2016.