Partnering to make peace: The effect of joint African and non-African mediation efforts’ How a statue unveiled the President, part 2

How a statue unveiled the President, part 1

The swamps around Washington, DC were drained a long time ago to make space for the nation’s monuments. In the 1800s, the capital landscape underwent alterations that culminate in today’s National Mall, an expanse of 146 acres, dotted with museums, memorials and monuments whose contradictory stories represent American history. The most recent addition is the National Museum of African American Museum, whose founding director, Lonnie G. Bunch III described the institution as presenting “America’s Story” and that “this museum is for all Americans.” An expression of investment in a democratic story, Bunch argued that American history can be viewed through and invigorated by the complicated history of its population of African descent. But the events of this summer in Charlottesville and beyond–including a noose tossed into an exhibit on segregation at the African American Museum–issue a dark reminder that extracting insight from history remains a contentious act.

A country’s symbolic landscape is not just or even primarily about its past: Museums, monuments and memorials provide public, material form to the narratives that we tell about ourselves today and into the future. Such structures embed a story within physical presence, attempting to pin down how the past is “usable” in the present. The meaning of historical events is never entirely fixable, but museums, memorials and monuments determine to try. Thus, when a new structure is revealed to the public, it is described as a dedication: a presentation of a historical moment or figure designed as an enduring interpretation about its significance. Ironically, the very act of setting narrative and meaning into material form creates the opening for a memorial or monument’s downfall. In choosing a particular form for an ideal, however reprehensible or progressive, the difference between the purported universal or transcendent meaning and the material conditions of any given instance is exposed.

This is what we might call memorial logic. In the context of U.S. history, its most perilous moment was the American Civil War. This conflict erupted for multiple reasons, but central to its violence was the inherent contradiction between an American ethos and the material living conditions of its African-descendant populace could no longer be sustained. Either the American dream would die or it would expand – in theory — to this portion of population. The Robert E. Lee statues mounted across the South were in some ways more honest than the story of equality that Americans like to tell themselves: these statues presented physical reminders that losing the war did not mean losing the peace, not that African-Americans needed any reminding. Jim Crow laws, institutionalized prejudice and rigid socio-economic hierarchies across the country served to mark this ground with ample clarity.

Nonetheless, the statue instructs: material form and self-imagination combine, forcing irrevocable decisions. Raising or felling a statue requires taking a firm position on long-standing ideology and interpretation of history. And once a statue falls off the pedestal, a new question haunts: do we know what to put in its place?

Often used interchangeably, memorials and monuments are different in subtle if important ways. Art critic Arthur Danto, once argued that the two concepts are differentiated by their central purpose: the monument celebrates beginnings and exhorts to always remember, whereas the memorial speaks of endings and what should never be forgotten.

For some, scale and how a structure speaks to its audience serve to distinguish monuments from memorials: the former aggrandizing, the latter assuming a more personal, intimate scale. Take, for instance, the Jefferson Monument, unveiled in 1943, while Franklin Roosevelt was President. Its design and scale testify to a desire for leaders to be timeless, mythical and larger than life. Visitors are dwarfed next to the austere ‘founding father,’ looming 129 feet above them. Jefferson is portrayed as transcendent: surrounded by Greek columns, as if without historical context. When it came time to honor Pres. Franklin Roosevelt in 1997 under President Clinton, much had changed, not only in the form but also the function of national monuments.

depicts the challenges faced by average Americans of the time: including human sized statues of people waiting in a breadline, and a man sitting, ears bent towards the radio voice of their leader. Scenes that beckon to visitors to join. The conflicts and struggles of the Roosevelt Presidency are abstracted into rock and water. The President himself is portrayed in his wheelchair—just a little larger than life. 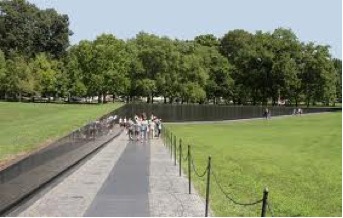 Imagine as well, the Vietnam Memorial, a visible scar, etched with the names of over 58,000 soldiers who died in the conflict. This memorial democratizes in that it is literally composed of individual names on a wall that humbly but irrevocably occupies space on the National Mall. It reflects, rather than resolves the social divisions caused by the war.

What all of these forms share, however, is the logic of carving out sacred space beyond everyday disputes about the meaning of this or that current political issue. They give form to the phrase ‘historical perspective’ meant to inform longer-term vision that guides a country forward. They represent attempts to extract events or figures from history and place them into a realm that stands firm regardless of the passage of time. They attempt to be constant, faithful embodiments of the substance from history that we want to take with us into the future. But they can, of course, as objects that are mounted and dedicated, be taken down, contextualized or replaced.

Memorial and monumental logic changes with time. We happen to live in a period of an international ‘memory boon.’ Starting in the 1980s, accelerating at the end of the Cold War, and carrying through to practices of countries emerging from military dictatorship, armed conflict and genocide, historical memory of past violence and injustices has taken on new relevance in our era. In some cases, the previous dispensation was cast aside and ancient past was resurrected in support of new chauvinist agendas. In others, political changes prompted a reckoning with past inequities. Memory infused both strands of calls for change. Statues of Lenin, Stalin and national Communist leaders toppled across former Soviet bloc countries; South Africa inaugurated a social and political transition away from apartheid that included re-assessment of its memorial and museum landscape; Holocaust memorials opened in the US and across Europe; and memorial museums took shape in places from Argentina, to Rwanda and the former Yugoslavia.

As the twentieth century ended and the new millennium began, memorials to violent pasts were erected around the world. Why? Philosopher Andreas Huyssen proposed a two-part response to this question. Memory’s appeal resides in the character of modernity today, in which globalization and consumerism operate via abstraction, greasing attachment to specific social histories, such that people must grasp for and even invent memorial handholds. Memory also provides dark guidance taken from the collapse of utopian visions for the future. Huyssen wrote: “In our century different political versions of the some better future have done fierce battle with each other, but the quintessentially modern notion of the future as progress or utopia was shared by all. It no longer is.” (Huyssen 1995, 8). Ideological approaches to creating more just societies no longer hold sway. In their place, is a discourse of learning from the past, dark reminders of how plans for the future were used to justify terrible blood-letting. The increasing relevance of dark history and memorial structures that offered layered and multi-perspectival symbolizations of the past suggest a different sort of guidance for the future than previously held sway. It is a more humble future, cognizant of the perilous balance that must be continually re-calibrated between idealism and exclusion.

The memory boon is thus the product of ever-more powerful transnational currents and the end of narratives that in previous times would have been summoned to temper them. Memorial controversies over the Civil War is a distinctly American symptom of the resulting malaise, an emblem for the political system’s failure to seriously grapple with the pressing social, political, and economic issues of the day.

If there is to be a memorial to the American Civil War, that period of unsurpassed American bloodletting, it should be to John Jefferson Williams. He was the last soldier to die in the Civil War, although far from the last person killed by the rift exposed by that conflict. On May 13, 1865, the twenty-two year old Union soldier from Indiana was killed in the battle of Palmito Ranch near Brownsville, Texas. It is telling that the war’s final moments came not with the tidal waves of bloody confrontations in the east, but in a pitched skirmish heading west. These western Civil War battles reveal that the war was about the future of the country as it expanded. How would Americans define ‘progress’ as the uneasy balance of free and slave states came crashing down in the rapidly expanding territory? The compromises that gave permission to continue the abomination of slavery no longer fit the growing nation. Williams joined the ranks of the estimated 620,000 to 750,000 dead (includes deaths on the battlefield and through disease). These fatality figures are higher than all other American war-related deaths combined. The Civil War was – and may it never be surpassed – the deadliest conflict ever fought by the United States of America.

It was a terrifying, final spasm of the four hundred year institution of American slavery, a practice founded in violence, built on dehumanization, justified through racism, and celebrated as an economically necessary evil. Reasonable guesses of how many Africans died during the trans-Atlantic slave trade alone range from 9 million to 22 million: the incredibly broad range is a product of the cruel treatment that begins with capture in Africa, continues into the densely populated prison cells—like those at Gorée Island in Dakar, Senegal, now a memorial museum — and spreads across the mass grave of the sea passage, all made possible by the brutal disregard for the humanity of the captives. Black people in the United States never gave up resisting the conditions in which they found themselves: slavery had to be continually maintained and monitored through violence. Enslaved populations invented millions of ways of coping, nurturing each other, and dreaming of a future for their children—many ripped away from their families—that would offer a more forgiving life with a broader range of possibilities.

In a simple formulation, the Civil War was about whether this country could sustain its foundational narrative balancing equality with freedom in contradistinction from the material conditions of slavery. Self-evident fact run up against living contradiction: “…that all men are created equal, that they endowed by their Creator with certain unalienable rights….” This was a very particular kind of promise, not the kind that is realized at any point, but an investment in hope. The principle it lays forth cradles possibilities yet to be seen. Not equality as it stands, but as it might yet be championed, ever changing, and weighed against the sometimes competing, sometimes bolstering commitment to freedom. This was story of America that we told to ourselves and believed, set to the tune of progress.

One Response to How a statue unveiled the President, part 1