How a statue unveiled the President, part 2 September Employee of the Month: Aung San Suu Kyi

WPF ‘Employee of the Month’

By World Peace Foundation On September 14, 2017

The World Peace Foundation’s ‘employee of the month,’ is an award bestowed on someone or something that contributes to keeping the Foundation in business. How do world figures make this contribution? The answer resides in a quirk of our endowment. 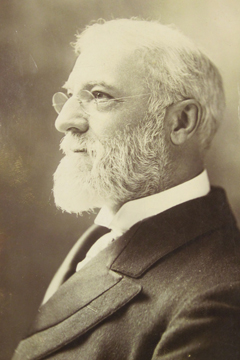 Edwin Ginn, the founder and benefactor of the World Peace Foundation, was described in a memorial essay as “a forward-looking, farsighted man, who gave generously and planned wisely for the public welfare.”[i] The public welfare included both his unprecedented personal investment in world peace and his support for the working poor. On his death in January 1914, Ginn became the first individual to give one million dollars to the cause of international peace. His will included this generous and visionary endowment, which sustains the WPF to this day.

Peace, as Ginn stated in an address at the Mohonk Conference on International Arbitration on May 14, 1913, could be achieved through a combination of individual acts of leadership and collective engagement: “We have before us a task that few comprehend. It is for us not only to institute the measures necessary to curtail this awful waste of life and property, but to bring conviction to the masses that this question cannot be handled successfully by a few people. It is a work for the whole world…We must place responsibility as broadly as possible upon the people, and ask each to take a hand in contributions of both money and time…All must be awakened to the necessity of taking a vital hand in this work”[ii]

When—not if—world peace was achieved, Ginn’s will stipulated that the funds that support the World Peace Foundation should be transferred to support another of his charitable commitments, a model tenement that Ginn had himself supported, the Charlesbank Home. The home was to provide “comfortable living quarters, at a reasonable price, for working girls and students.”[iii]

Every year, the three trustees of the Ginn Trust—the custodians of his bequest—vote on whether world peace has been achieved.

Thus, the ‘employee’ of the month is someone who keeps the Ginn Trust funds dedicated to supporting the WPF—that is, someone who has made a distinct contribution to preventing the achievement of world peace which would result in the transfer of the Ginn Trust income to the Charlesbank Home. We have tried to identify awardees considering multiple diversity factors: geography, gender (although winners are disproportionately male, and some ungendered items), and mode of contribution.

For several years, we have maintained the award without advertising its winner. Among the winners thus far in 2017 are: the House Republican Leadership, Narendra Modi, Nicholas Maduro, Marine Le Pen, Larson C ice shelf, and Fatherland First Facebook Group. This year we have decided to announce each month’s winner on our blog. If you have ideas for nominees, let us know in the comments.

One Response to WPF ‘Employee of the Month’