WPF ‘Employee of the Month’ Video: How a statue unveiled the President 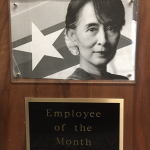 By World Peace Foundation On September 18, 2017

September 2017’s  “employee of the month” is Aung San Suu Kyi, awarded this month for her refusal to recognize the assault against the Rohingya population of Myanmar for what it is: a massive state-sponsored campaign of violence against a minority group. In lieu of a WPF explanation of the awardee, however, we re-post the below “Open Letter to Daw Aung San Suu Kyi” written by Burmese activists.

As your fellow countrymen, with deep roots in our troubled birthplace, we are writing to you to share our sadness and concern about your personal legacy as the nation’s leader, the plight of our people, and the future of Myanmar as a nation.

Some of our family members and parents were contemporaries and colleagues of your late father, General Aung San. They made contributions to the country’s welfare as he did.

When you delivered your first speech in 1988, declaring that “as my father’s daughter I could no longer remain silent when the public remains subject to decades of oppression”, we were deeply moved and inspired by your determination and courage.

Like millions of Burmese we transferred to you, the love, respect and trust which your martyred father earned from our parents and generations of Burmese.

In your long years of captivity as a Prisoner of Conscience, we stood by you and did everything in our power, individually and collectively, to secure your freedom and build an international movement in support of your leadership.

We did indeed respond to your famous call, “use your liberty to promote ours”. Irrespective of our ethnic and religious backgrounds – including Rohingyas, other Muslims, Hindus and Christians, we all rallied to your call to end the oppression of the majority by an elite minority in the Tatmadaw.

We rejoiced when you were released, and waited to see how you would rally the nation to our common cause – democracy. But you acknowledged none of your able supporters and fellow dissidents, exiled or formerly jailed, much less consulted with them. Many would have assisted you in any way they could with years of invaluable global experience in many fields. You showed no interest in soliciting any intellectual or professional support.

Worse still, we were shocked by your statement that you were a politician – meaning political expediency might guide your decision-making, as if universal human rights and politics were mutually exclusive.

Then the make-up of your government caused us concern. None of the well-respected experienced senior NLD leaders were included. No one of outstanding ability and experience was drafted into your cabinet. Most were inexperienced NLD newcomers and the only ones with any real capacity or experience were ex-military, functionaries of the very regime that had incarcerated you, oppressed the nation for the last fifty years, and whitewashed the crimes of our former tormentors and jailers.

Where are we headed? Has our democratic transition in Myanmar turned full circle? Are we back under an autocratic regime albeit one that was democratically elected? You need to encourage a free press, allow dissent in the ranks, debate policy differences, and build up the next generation of leaders from all ethnic backgrounds and religions, besides building trust with the generals. We know it is not easy. But they are the building blocks of any reformist agenda. We are not expecting you to do it alone. It can only be done with a strong team.

Given the memory of your father and the supreme leadership position that you now hold in the country, we are appealing to you to draw a firm line based on democratic principles and human compassion. Burmese society is sleep-walking into the abyss of racial hatred and religious bigotry. The violence against the Rohingya must end. Whatever the crimes of the militants, it is wrong to kill innocent villagers – men, women, and children, in Rakhine, Kachin and Shan States, especially in Rakhine. You have a moral obligation to act.

We also urge you to allow the United Nations and human rights organizations full access to determine what went wrong. Humanitarian aid should also be made available to all those in need irrespective of whether or not they are citizens of Myanmar.

We, the undersigned are making this statement with sadness and regret. But we are compelled by the credible reports of the catastrophic turn of events in Norther Rakhine. You can still heal the wounds and lead the reconciliation process. We would like you to take the initiative as the elected leader of Myanmar. It is not too late to do the right thing by your father’s legacy.

We wish you well. May you walk in peace.

Share
Tagged with: atrocities • Burma • Employee of the month • Myanmar