Brexit increases the risk of famine Employee of the Month: Hailemariam Dessalegn 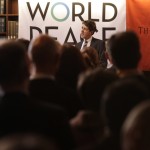 Interviewed published on the Newshour’s website on March 3, 2018. South Sudan and Yemen are at the brink of a severe food crisis, with over 400,000 malnourished children in Yemen, the United Nations estimates. Alex de Waal, a professor at the Tufts Fletcher School who spent years in the Horn of Africa, talks to Megan Thompson about his new book, “Mass Starvation: The History and Future of Famine” and how military conflict causes famine.