Employee of the Month May 2018: Theresa May and the Banality of Evil Can we prosecute starvation?

For the seventh consecutive year, SIPRI’s data on military expenditure worldwide shows ‘not much change’ in the world total – but many of the signs point to a renewed surge in years to come. Their fact sheet reviews some of the key trends in the data.

The world total for 2017 is estimated to be $1,739 billion, with an increase of 1.1% in real terms over 2016. After rising sharply during the 2000s, world military spending has essentially plateaued since 2010; some small falls from 2011 to 2014, followed by some small rises, not leaving the total, in constant prices, at about the same level as its previous peak in 2011. But within this overall picture of little change are a number of separate plot arcs.

First, the global financial and economic crisis that struck in 2008, after initial stimulus packages in 2009, led to substantial cuts in military (and other) spending in the US and Europe, as austerity and deficit reduction became the order of the day. Those cuts have by now more or less played themselves out, and in some cases are being reversed.

Second, the withdrawal of the bulk of US forces from Iraq, and a substantial reduction in troop numbers in Afghanistan, had a further downward effect on US military spending.

Third, Chinese military spending has continued its inexorable rise, keeping pace more or less exactly with the country’s economic growth over the past decade; slowing now, but still significant. Asian spending in general, outside China, has also steadily increased, though not as rapidly. In absolute terms, the biggest other contributors to the Asian increase since 2010 have been India, Indonesia, Pakistan, the Philippines and Viet Nam, reflecting regional tensions.

Fourth, an oil-fuelled surge in spending by numerous countries great and small, benefiting from (or cursed by) high oil prices and new discoveries. This continued until oil prices started to crash in the second half of 2014. The reaction of military spending in the big oil producers to this fall, however, has varied in timing. Some countries with more vulnerable economies, like Angola and Venezuela, started slashing spending already in 2014 or 2015, with Angola’s milex falling by 61% since 2014, and Venezuela’s by 71% since 2013. Others had a more delayed reaction: Iraq and Saudi Arabia, both heavily engaged in conflict, continued to increase spending in 2015, before making large cuts in 2016, then increasing again somewhat in 2017.

The other really big oil-dependent military spender, Russia, embroiled in wars in Ukraine and Syria, and seeking to rebuild its arms industry and armed forces from their post-Soviet collapse, and to challenge US dominance on a number of fronts, continued increasing spending through 2016, reaching an economically hard-to-sustain level of 5.5% of GDP that year. In 2017, they cut spending by 19%, as economic realities finally caught up.

One other big oil producer, the UAE, does not deign to provide information on their military spending. SIPRI estimated it at around $24 billion in 2014, but even the limited information that allowed that estimate has since dried up. The country’s continuing high level of arms purchases and escalating involvement in the Yemen war, however, do not suggest much of a cut.

Table 1, and figure 1 below, illustrate how these different trends since 2010 combined to more or less cancel each other out, showing the changes in military expenditure over time for key regions and groups of countries: North America, Western & Central Europe, Asia and Oceania; then a fourth group consisting of the Middle East and a number of other countries where oil is a very significant source of revenue and determinant of military spending: Algeria, Angola, Chad, Republic of Congo, Libya, Nigeria, Sudan, and South Sudan in Africa; Azerbaijan and Russia in Europe; and Ecuador and Venezuela in South America. (This leaves out two Asian countries where oil is a significant factor, namely Kazakhstan and Vietnam, which are included in Asia & Oceania).[1] The fifth group is the rest of the world, i.e. the remainder of Africa, Latin America and the Caribbean, and Eastern Europe. 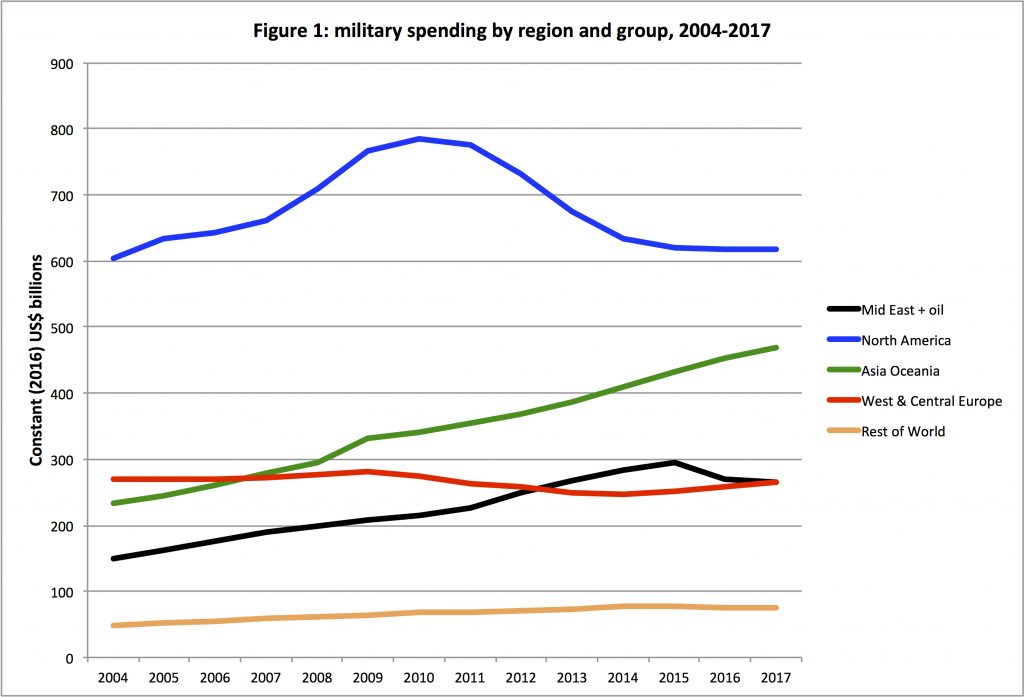 Looking to the coming years, oil prices started rising again in early 2016, and have been rising quite substantially since the middle of 2017, reaching their highest levels since late 2014. It seems entirely possible, then, that the military spending falls prompted by the oil price crash have largely played themselves out, so that the cauldron of conflict and tensions in the Middle East may once again start driving spending up, both for countries in the region and those like Russia that are heavily engaged from outside.

Meanwhile in the US, spending flattened out in 2017, and is set to increase sharply in 2018 and 2019 under the budget deals recently approved by Congress, meeting and even exceeding Trump’s demands for the Defense budget.

So the US will be increasing; China will be increasing (at about the same rate as before, apparently unperturbed by the Trump surge); Saudi and Russia may well have got the oil-related cuts out of their system; India has recently been increasing sharply again, after a pause of a few years in the early 2010s, and have budgeted a further increase in 2018; and Europe has at least stopped cutting milex, and is increasing to some degree. So after a seven-year pause for economics, it looks like the global arms race is on the move again.

Some other nuggets from the data:

Some more graphs are shown below, illustrating some of these points. 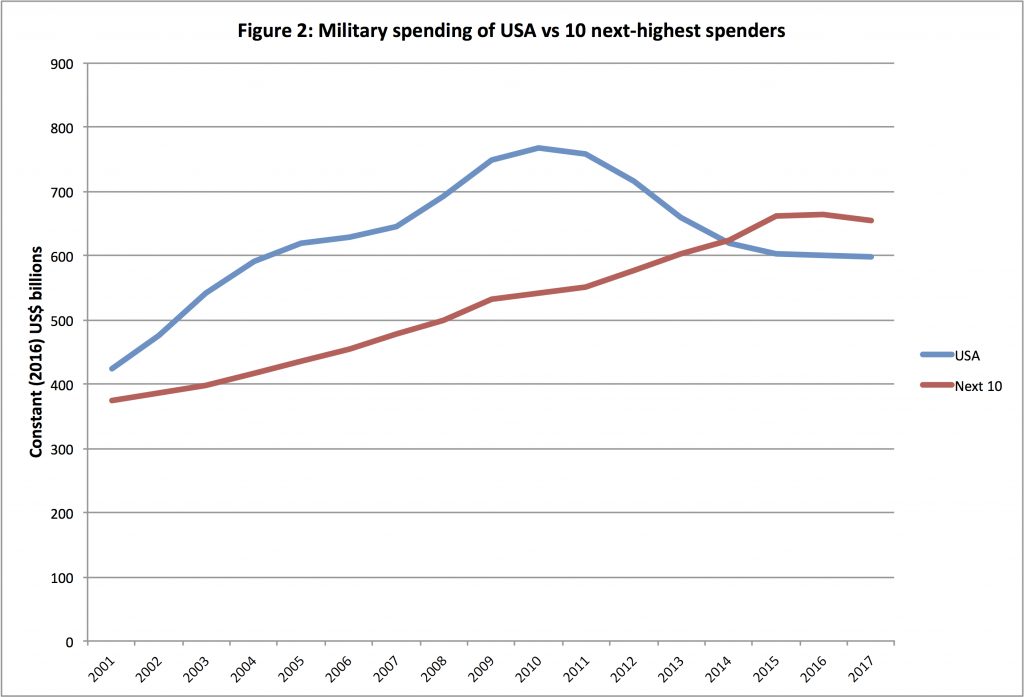 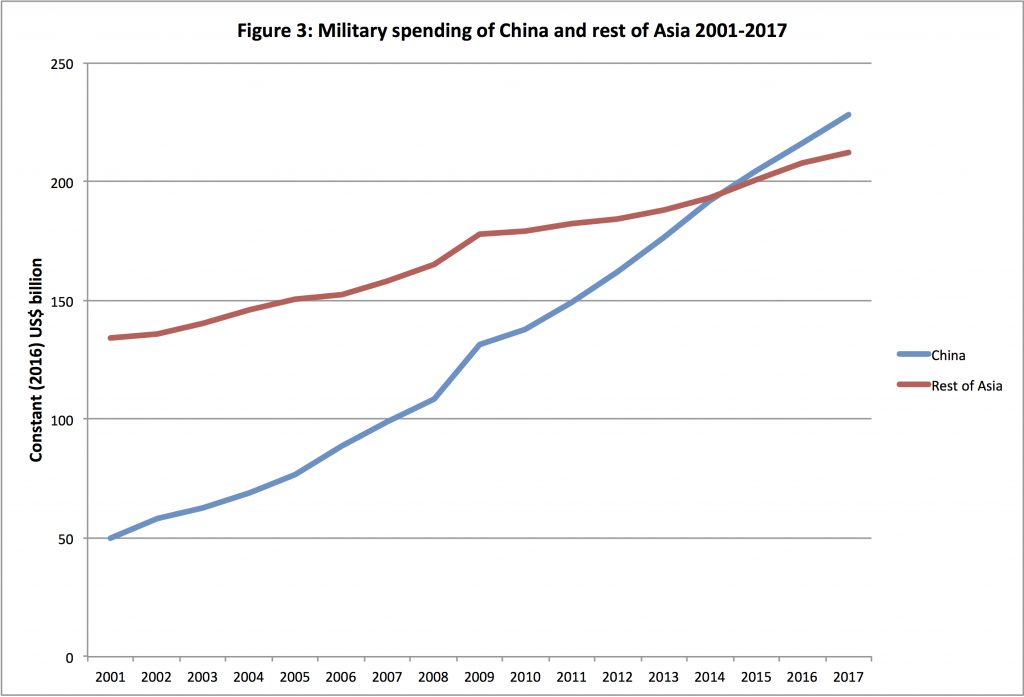 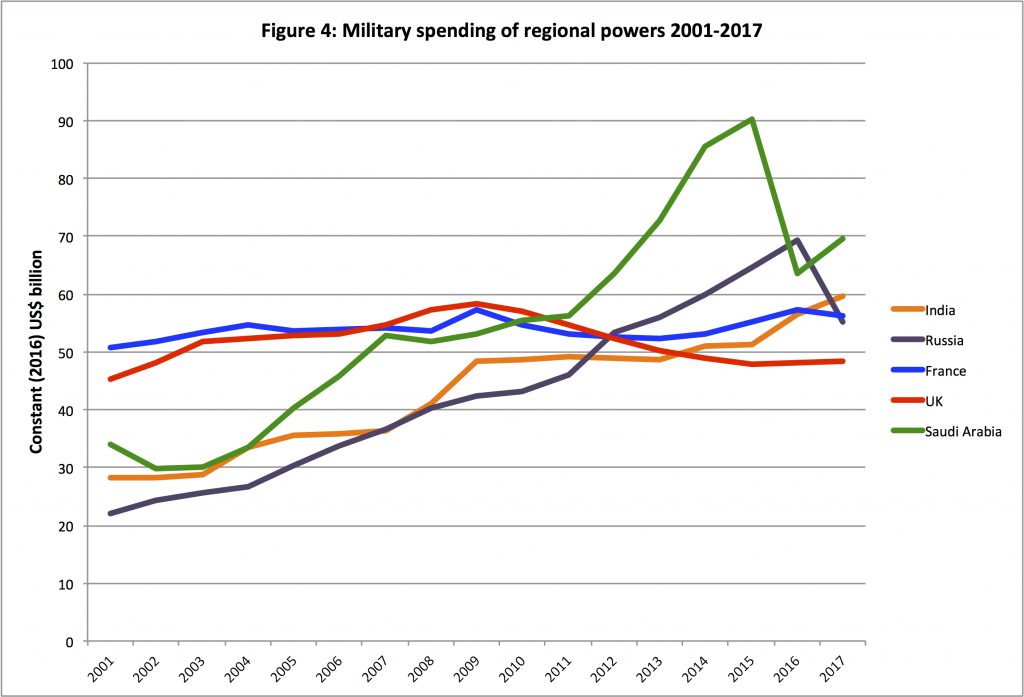 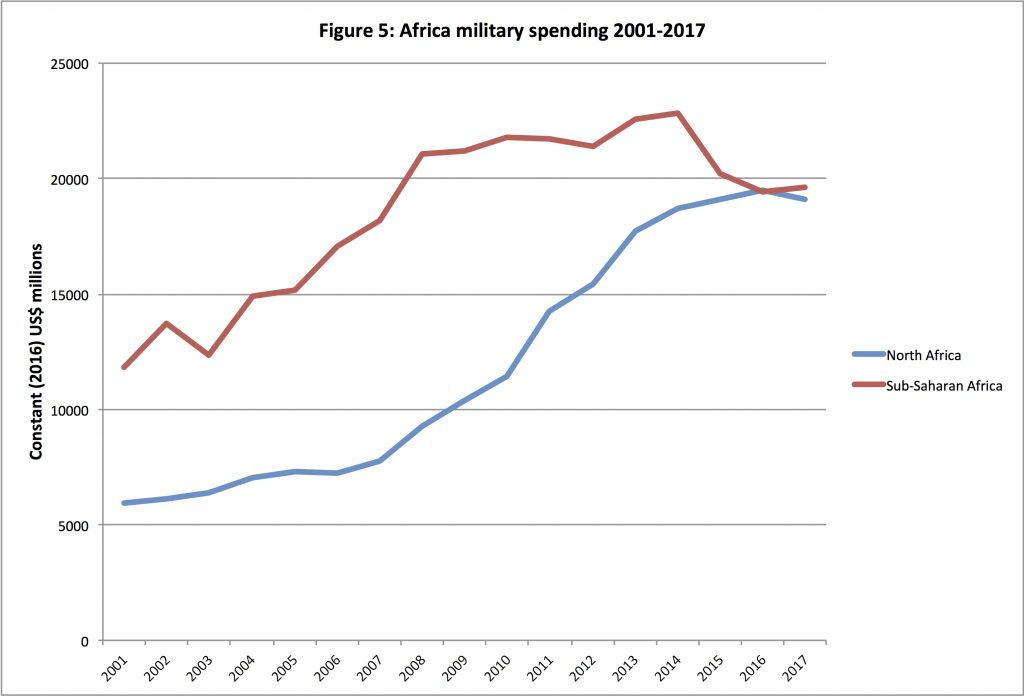 [1] The regional totals are the estimates published by SIPRI, which include estimates for countries with missing data. The totals for the ‘Middle East and oil’ group are derived using data provided by SIPRI on the country estimates used for missing years of data as part of estimates for world and regional totals. The ‘rest of world’ figure is obtained by subtraction of the other four groups from the world total.