Starvation: Employee of the Month, September 2018 Review of: Paul D. Williams, Fighting for Peace in Somalia: A history and analysis of the African Union Mission (AMISOM), 2007-2017. 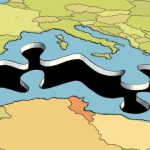 The return of Eurafrica?

By World Peace Foundation On September 24, 2018

In an article published on September 20, 2018 by The Economist, “Why Europe should focus on its growing interdependence with Africa,” WPF’s Alex de Waal discusses the shared space of the Mediterranean, between Europe and Africa. The full article is available on their website; below is an excerpt.

The scramble for Europe

There is an alternative “Eurafrica” strategy, writes Mr Smith. This is to accept the integration of Africa and Europe. Alex de Waal, an Africa expert at Tufts University, agrees that is the only realistic course. “The logic of history is a European-Mediterranean market that will cross the Sahara, too,” he says. “The challenge is to recognise that reality and make it a mutually beneficial and regulated one. Building walls will not work.” This, so he contends, means increasing Europe’s role as a supporter of, and model for, a multilateral Africa: backing blocs, based on the EU, which are either continental (such as the African Union) or regional (like the East African Community and the Economic Community of West African States).

It also means creating regulated routes for migrants travelling in both directions. Over the century, European districts that today have a Eurafrican character—parts of Barcelona, Marseille, Brussels and London, say—will become more the norm than the exception. “African migrants will provide a significant part of the European workforce, so we need to ask what part of the workforce and what sort of training we need to provide,” says Mr de Waal. African music and food will become more prominent in European cultural and culinary diets. Meanwhile Lagos, Casablanca, Nairobi and Kinshasa would receive their own influxes of European businesses, politicians and fortune-seekers.

The two options, Fortress Europe versus Eurafrica, may one day end up as a choice between denial and reality. Europe cannot insulate itself from the dramatic long-term shifts in its continental neighbour. Like it or not, Eurafrica is part of Europe’s demographic and cultural destiny. It is better, surely, not to ignore or reject this but to work out how to make it a success.