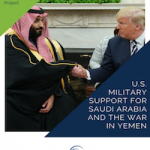 Recommended reading: U.S. Military Support for Saudi Arabia and the War in Yemen

Bill Hartung, a colleague from our project, Indefensible: Seven Myths that Sustain the Global Arms Trade, has just authored an important new report, U.S. Military Support for Saudi Arabia and the War in Yemen (Center for International Policy, November 2018). Below is an excerpt of he Summary and Key Findings, we recommend reading the report in its entirety, which is available through the Center for International Policy.

The Saudi regime’s murder of Jamal Khashoggi and its continued killing of civilians in Yemen has drawn unprecedented scrutiny to the U.S.-Saudi military relationship. This report looks at that relationship in closer detail, with an eye towards how it creates leverage that the U.S. can use to change Saudi conduct and end the Yemen war.

The assassination of U.S. resident and Washington Post contributor Jamal Khashoggi, a Saudi national, at the hands of the Saudi regime has provoked a rethinking of U.S.-Saudi relations in general, and military relations in particular.1 President Trump’s declaration that he would not stop U.S. arms sales to the kingdom even if it is responsible for Khashoggi’s death frighteningly suggests that contractor profits and a small number of jobs take precedence over the need to hold a murderous regime accountable.2

The President’s assertion that it is possible to balance benefits to the U.S. economy against the heinous behavior of an ally doesn’t hold up to scrutiny. No economic benefit, no matter how large, can justify continuing to arm a regime that has not only killed a journalist in the most brutal way imaginable but has killed thousands of civilians in indiscriminate bombing attacks in Yemen, many of them with U.S.-supplied bombs and aircraft.3

But if economic arguments are to be brought into play, they should at least be accurate. This has not been the case. The president has claimed a sweeping range of jobs flowing from his alleged $110 billion arms deal with Riyadh, from 40,000 to “over a million,” in one case boosting his estimate by 400,000 jobs within just a few days’ time. To be fair, it seems like the million jobs figure was meant to include some commercial deals as well as the purported arms sales, but the president’s ad hoc utterances on the subject make it hard to know for sure.4

The biggest flaw in President Trump’s ever-growing estimate of the U.S. jobs at stake in arms sales to Saudi Arabia is that the size of the alleged $110 billion U.S.-Saudi arms deal – in some cases referred to as if it is a single transaction — is wildly exaggerated. The White House has issued a list of deals adding up to $110 billion, but most of them were either notified to Congress during the Obama administration, or are projections far into the future of potential sales that are unlikely to ever occur.5 In hard numbers, the State Department estimates that the Saudi regime has signed $14.5 billion in letters of offer and acceptance (LOA’s) for new weaponry and support equipment since President Trump took office.6 That’s a little over 10% of the much touted $110 billion figure. And these letters of offer and acceptance represent only one step in a longer process, not signed contracts.7

Another way of looking at the issue is that Congress has received $20 billion in notifications of potential new arms sales to Saudi Arabia since President Trump took office. There have also been roughly $2 billion in deals licensed by the State Department, for a total of $22 billion.8 Most of these have not reached the stage of a letter of offer and acceptance being signed, and the largest one, a $13.5 billion deal for a Lockheed Martin Theater High Altitude Area Defense (THAAD) missile defense system, is still under discussion.9 A September 30, 2018 deadline for Saudi Arabia to take advantage of a 20% discount on the deal is long past.

All of the major Saudi arms sales in the pipeline are based on arrangements made during the Obama years, when that administration notified Congress of a record $117 billion in arms offers to Saudi Arabia over its eight years in office.10 Over those same eight years, there were $65 billion worth of formal agreements signed with Saudi Arabia and roughly $18 billion in deliveries made.11 The discrepancy between offers, agreements and deliveries is a result of the fact that a significant number of offers don’t eventuate in agreements or sales. In addition, deliveries generated by completed deals are often spread out over many years. And finally, the value of some deals is reduced between the time of the initial offer and the final agreement.