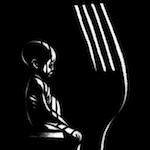 What do we see of famine? 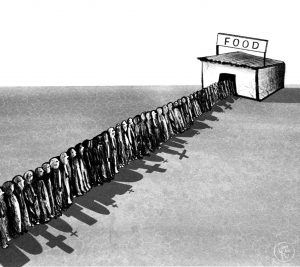 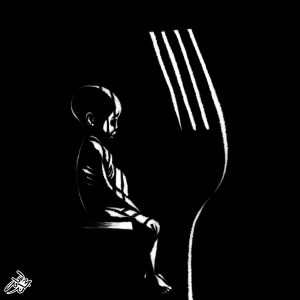 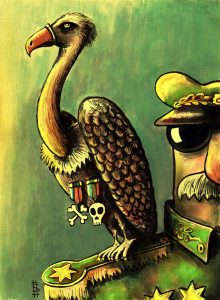 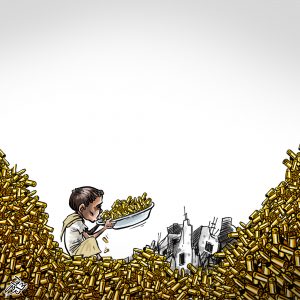 Think the word ‘famine’ and pay attention to what scenes come to mind. The enormous eyes and distended stomach of a suffering child; a parched landscaped; the rush of humanitarian actors, beating back the tide of death? Perhaps, it is a more specific image: from Sudan, Kevin Carter’s infamous image of a bird of prey, beside an achingly thin child’s body, about to perish. Or even a more recent image, like Tyler Hicks’ work in a 2018 New York Times exposé on Yemen. (1)

The challenge of famine photography is that rarely is it possible to capture both victims and perpetrators–those who actively create the conditions in which mass starvation occurs–within a single frame. Photography uses spatial proximity to render relations visible. For mass starvation, time, not space, is the devastating requirement. Famine results when those who blockade ports, bomb agricultural sites, or force people in fragile environments to flee their livelihoods, heed to policies over months or even years, regardless of the impact on entire civilian populations.

Is it possible to create a new image of famine that does not solely point towards the all-too-real suffering of victims, but also towards the political and military processes that create conditions in which entire populations are at risk of dying? How might one convey decision-making, responsibility and, ultimately, culpability for famine?

Here we introduce four political cartoons that offer new ways of imagining famine today. The cartoons were created as part of a collaborative project with Cartoon Movement. Among many excellent and some more conventional contenders, this gallery presents the four images that we thought best captured the idea of famine crimes.

The cartoons are by Osama Hajjaj, Camdelafu and Moshen Zarifian.

One Response to What do we see of famine?