What do we see of famine? 2018 Movement towards accountability for starvation 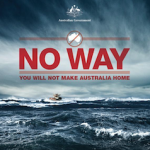 This month’s winner is the global network of barricade builders, an international class of leaders—nationalized this month through the example of Australia –dedicated to governing by creating zones of privilege, predicated on the simultaneous creation of zones of deprivation. Our attention was drawn to Australia when the country’s highest literary award was granted in 2019 to Behrouz Boochani, who spent years languishing in one of these zones of deprivation: Manus Island, in a holding center for those seeking asylum. He refers to the asylum system as kyriarchal, as is explained below.

For those committed to the theater of privilege, nationalism provides the costumes. The script is a continual re-articulation of a single proclamation: I have the right to not care for those in the exclusion zone. The performance reaches a crescendo in immigration policies that are not designed to grapple with real people caught in the system’s snares (and certainly not in untangling the snares for a more comprehensive approach). Rather, ‘policy’ on this stage is an attempt to control the imagination of who matters and how—such that precedes any policy discussion.

The opening scene of this particular performance is a phone call from 28 January 2017, between then-newly elected US President Donald Trump and former Australian Prime Minister Malcolm Turnbull. During the call, Turnbull tried to explain to Trump the terms of an agreement regarding refugees that former US president Obama had made with Australia. The conversation provides unintentional clarity on both their positions, and the contours of the immigration policies they selected:

Turnbull: Well, yes. Mr President, can I return to the issue of the resettlement agreement that we had with the Obama administration with respect to some people on Nauru and Manus Island. […] They are basically economic refugees from Iran, Pakistan, and Afghanistan. That is the vast bulk of them. They have been under our supervision for over three years now and we know exactly everything about them.

Trump: Why haven’t you let them out? Why have you not let them into your society?

Turnbull: OK, I will explain why. It is not because they are bad people. It is because in order to stop people smugglers, we had to deprive them of the product. So we said if you try to come to Australia by boat, even if we think you are the best person in the world, even if you are a Noble [sic] Prize winning genius, we will not let you in. Because the problem with the people —

Trump: That is a good idea. We should do that too. You are worse than I am.

Trump: I hate taking these people. I guarantee you they are bad. That is why they are in prison right now. They are not going to be wonderful people who go on to work for the local milk people.

Turnbull: I would not be so sure about that. They are basically —

Trump: Well, maybe you should let them out of prison. I am doing this because Obama made a bad deal.

Turnbull: Let me explain. We know exactly who they are. They have been on Nauru or Manus for over three years and the only reason we cannot let them into Australia is because of our commitment to not allow people to come by boat. Otherwise we would have let them in. If they had arrived by airplane and with a tourist visa then they would be here.

Trump: What is the thing with boats? Why do you discriminate against boats? No, I know, they come from certain regions. I get it.

Turnbull: No, let me explain why. The problem with the boats it that you are basically outsourcing your immigration program to people smugglers and also you get thousands of people drowning at sea. So what we say is, we will decide which people get to come to Australia who are refugees, economic migrants, businessmen, whatever. We decide.

[full transcript of the phone call]

The conversation provides a primer in the warped views of the problem at hand, how to exclude asylum seekers in a manner that promotes privileges of the few, by embedding them within an international agreement. This is no simple nationalism; it is nationalism in the service of globalized exclusion. Among the most heinous violence perpetrated by this way of governing is how it does not aim to govern through policy, but by dominating the imagination of public future and public good, reducing both to fear and transactional benefit accrued.

But in the realm of the imagination, there are many resources and strategies for fighting back. Behrouz Boochani illustrates one. In an act of fearless literary offering, Boochani claimed back the space of imagination by telling his story in No Friend But the Mountains: Writing from Manus Prison (Picador, Australia, 2018). His cry to re-imagine the human stakes of asylum, was heard by the committee that decided to award Australia’s prestigious Victorian Prize for Literature, and the Prize for Non-Fiction to Boochani’s book.

The book (not out yet in the US) begins with a disclaimer:

“This book has been written to give a truthful account of the experience of Australia’s Manus Island Regional Offshore Processing Centre and to convey a truthful, first-hand experience of what it has been like to the detained within that system….No detainee or refugee in this book is based on a specific individual, however detailed their stories. …They are composite characters: a collage drawn from various events, multiple anecdotes, and they are often inspirited by the logic of allegory, not reportage. The details around the two men who died on Manus, Reza Barati and Hamid Khazaei, are in the public domain and so they are each identified by name as a mark of respect.”

The book includes a description of the perilous sea voyage that condemned Boochani to life outside Australian asylum consideration: “We must find the will to stay awake and struggle. Sleep means death. I start to bail out the water again. This is no time to sit around […]” Water was not the only threat. “Starvation,” he writes, “is such a powerful force. It pervades everything. A single pistachio, a single date, might determine whether one lives or dies. This was something I have realized during the days at sea, starving.”

He also describes life within the asylum system, which Boochani describes as a kyriarchal system:

The developments over the months slowly but surely prove to everyone that the principle of The Kyriarchal System governing the prison is to turn the prisoners against each other and to ingrain even deeper hatred between people. Prison maintains its power over time; the power to keep people in line. Fenced enclosures dominate and can pacify even the most violent person – those imprisoned on Manus are themselves sacrificial subjects of violence. We are a bunch of ordinary humans locked up simply for seeking refuge. In this context, the prison’s greatest achievement might be the manipulation of feelings of hatred between one another.[i]

Boochani’s formulation of kyriarchy borrows from feminist theory. The term is associated with feminist biblical scholar, Elisabeth Schussler Fiorenza, who defines kyriarchy as:

a neologism…derived from the Greek words for “lord” or “master” (kyrios) and “to rule or dominate” (archein) which seeks to redefine the analytic category of patriarchy in terms of multiplicative intersecting structures of domination… Kyriarchy is best theorized as a complex pyramidal system of intersecting multiplicative social structures of superordination and subordination, of ruling and oppression.[ii]

Thus, kyriarchy is a system that creates webs of privilege and exclusion. It bears resemblance to the term ‘intersectionality,’ but focuses attention on what is produced through systems of interlocking privilege. Fiorenza argues that countering it requires leaps of re-imagining agency and who has the right to determine meaning. She writes: “In reclaiming the authority of wo/ men as religious-theological subjects for interpreting biblical texts, for shaping religious communities and for defining biblical religions, my own feminist work has attempted to reconceptualise the act of biblical interpretation as a moment in the global praxis for liberation.”[iii]

Boochani likewise follows the path of challenging kyriarchy by refusing the role given to him, that of supplicant before an-uncaring system. Instead, he crafts a new imaginary through art. Journalism, his previous profession, only chips away at the day-to-day instances of oppression. Art has a chance of living beyond its contemporary moment, it can, as he notes, “secure a place in history.” For Boochani, art is foundational work.[iv] In undertaking this work, he has offered testimony of his own and other asylum’s seekers plight, and issued a call to action: challenging kyriarchies of all sorts begins by re-claiming public imagination.

[i] Excerpt from book available at: https://www.theguardian.com/commentisfree/2018/jul/31/writing-from-manus-prison-a-scathing-critique-of-domination-and-oppression

Share
Tagged with: Australia • Employee of the month • immigration • refugee