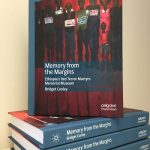 This is the second of a three-part blog series introducing my new book Memory from the Margins: Ethiopia’s Red Terror Martyrs Memorial Museum (Palgrave 2019). Here I provide an extract from the book addressing what is meant by ‘memory from the margins’:

What can one museum, the Red Terror Martyrs Memorial Museum (RTMMM), tell us about the role of memory in supporting democracy? To be sure, there are limits. Nonetheless, a view of memory from the margins reveals a glimpse of how a public memory project in the wake of mass violence makes its impact. This glimpse suggests that memory has an oblique, yet powerful, affinity with an idea (not a program or set of policies) of democracy as a politics based on the possibility of unsettling the present in a manner that opens space for new claims to be posed. When memory emerges out of the margins, it interrupts the current dispensation of power, altering who has propriety to speak and what concerns can be heard. There is no guarantee that such a disruption will occur in a society that either benefits from it (disruption can be destabilizing and destructive) or is responsive to it. I use the term ‘affinity’ to capture the sense that the political ‘meaning’ of memorial projects is largely undetermined, even if its structure as interruption aligns with a process of opening political discourse.

The formulation of ‘memory from the margins’ introduces several key terms. In the first instance, ‘memory’ as a concept is itself composed of multiple elements that arise out of a relationship to the past, and includes ideas of community and ethics. ‘From’ captures the movement that endows memory with disruptive capacity. ‘Margins’ identifies a starting point for narratives that do not fit the dominant story of the present.

Memory in my work is studied through the example of a memorial museum, hence is it a physical site of memory that is open to the public. The term ‘collective memory’ is relevant, but can misdirect. Its phrasing suggests a singular memory akin to individual memory that holds across a group. Few scholars use it in this fashion. Rather, picking up on Maurice Halbwachs’ initial theorization of the phrase, it describes how personal memory is socially constructed, and the social and political processes whereby parts of the past are deemed to have contemporary relevance (Halbwachs 1992). Memory projects concerned with histories of large-scale violence, often proceed through a normative view of collective memory: deploying an affective approach to representing violence, often by emphasizing victims’ perspectives, in order to argue for how they instill lessons of tolerance to new generations.

While this study of a particular memorial museum project relies heavily on victim and survivor narratives, it remains agnostic about how these narratives impact new audiences, and what ‘lessons’ the past offers. To this end, a working definition of memory that keeps these questions open is required. Drawing on three elements of memory that repeat across most definitions, ‘memory’ in this study is understood (a) in relation to a public project (in the sense of being available to the public) that (b) references a violent past, with (c) the aim of producing a new community,[i] responsive to ethical claims ‘to do something’ in the present. The precise configuration of past, community, and call to action varies considerably across examples and evolves over time. Throughout this volume, I argue that memory from the margins reveals disjunctions between these three elements, and thereby inserts disruption into the process of making social-political meaning from the past.

No definition of ‘memory’ means much without placement into a specific context. Memory of what? Whose memories matter and in what ways? Which ones become hegemonic, which are relinquished? How are memories imbued with new meanings, rendered ‘actionable’ in the present? The act of engaging in memorialization on its own does not necessarily imply a commitment to support democratic processes, more questions need to be asked: how are projects developed, by whom, with what intentions and means?

These central questions compose memory and cannot be engaged except through discrete examples. The very utopian promises that define memory, as a discourse whereby the past can be reconfigured to alter the present–especially its relation to democracy–is determined by the propositions put forward through the example. Selecting the precise example to prioritize is a practice riven with politics. How one argues that any given example establishes borders for concepts and informs their applicability to other cases and to socio-political processes–these are not innocent matters.

The preposition ‘from’ is a crucial modifier within the formulation of memory from the margins. It describes a movement that begins in one conceptual place, the margins, and interjects into a dominant narrative. It is the movement itself that generates critical interest. Thus, there is relativity at play in the formulation of memory from the margins, in that if movement is halted—especially as a memory discourse becomes dominant—its a disruptive capacity is diminished. Further, as will be examined below, any given memorial project might be marginal in some senses, but not in others. To examine movement—the ‘from’—margins must be triangulated not only to a singular dominant narrative, but multiple margins and dominant narratives.

The example of the RTMMM is particularly helpful for reading this movement because it does not hold center stage of any of the contexts within which it will be discussed. The period of the Red Terror is marginalized within Ethiopian history. The Ethiopian experience of political transition in 1991, including its adoption of multiple policies to deal with the past, are marginalized within the international transitional justice discourse. Memorialization itself is marginal within the various mechanisms that compose transitional justice and memory studies. In the Ethiopian context, memorialization has taken multiple forms: representing the narrative of the parties that won state power in 1991, contesting centralized authorities, politically ambiguous, and almost all of it newly contested in today’s context. Thinking about memory from across nested margins within this complex country example challenges the idea that one could arrive at any simple conclusions about the relationship between memory, democracy and power.

Individuals might gain agency through the social construction of memory-sites by embarking on a process of constructing meaning about the past in conversation with others and over time. Memorialization is grounded in and tethered to the past—which limits some of the ways that agents can tap into it—and yet subject to constant social reconfiguration of meaning. Agency is thus both necessary for memory projects, in terms of the process of positing memorialization as a social activity at a particular point in time, and limited in both the reference to the past (which cannot support just any claims) and conversation with others. The vacillation between the fixed and constructed components of memorial work can be elucidated in reference to anthropologist Anna Tsing’s discussion of objects that are never “self-contained, but always in relation—and thus site specific” (Tsing 2015, 220).

Imagining agency in relation to memorialization requires assessment of how meaning about the past is actively defined and redefined in relation to the work of memory-keepers, but site-specific to the intersections of memory, multiple memory-keepers’ interactions and an evolving socio-political context. The past cannot be called upon to do anything whatsoever; there are limits to what memories have socio-political resonance, how far meaning about the past can be stretched and who is empowered in the work of reconfiguring meaning. However, for any ‘object’ or conveyance of memory, these limits are not a priori givens, rather produced through the shared project of constructing meaning at any point in time. In this sense, the meaning of an object (in Tsing’s work) or a memorial project (in the example of the RTMMM) should be viewed as contingent: something exterior to individual human agency grounds meaning, even if it does only by describing the momentarily fixed point where multiple projects of making meaning converge.

In short, understanding the contribution of a memorial museum requires attention to site- and temporally- specific interactions. My approach, while learning from other studies of memory, argues that the potential social role of memory of mass atrocities, emerges from how a particular example functions. This argument would not be possible without important scholarly work has helped identify patterns and trends across memorial museums, learning from these works enables me to take the opposite approach of centralizing a reading of the example. However, at heart, the social meaning of memory of mass violence can be elucidated by adopting what Tsing describes as ‘nonscalablility theory’ that “requires attention to historical contingency, unexpected conjuncture, and the ways that contact across difference can produce new agendas” (Tsing 2012, 510).

Global trends have reinforced memory as a salient discourse in our time. But analysts must remain attentive to unexpected entanglements that produce and are produced by memorial projects within distinct contexts.

In the third of this series on my book, I place the Red Terror Martyrs Memorial Museum within its historical and political context in Ethiopia, covering several periods: the time of the Revolution and Red error (1974 – 1978), the transition from the military regime to the EPRDF (1991 – 2005), debates within the community that created the museum and its final form (2005 – 2010), interactions between survivor-docents and the visiting public (2010 – 2017) and the question of what role memory can play as Ethiopia faces another transition today.

[i] In many analyses of memory the idea of creating a new community is articulated in terms of identity, whereby the past solidifies an ethnic or religious identity. This approach does not apply to the RTMMM, where the violence did not align with ethnic of religious groups. Even in other circumstances, there are benefits to using “community” versus group identity when describing the production of a collective, in that it eschews the naturalizing tendencies of identity discourses.