The quest for a civilian-led transition in Sudan: Is African Union’s role still relevant? Almost everything we’re told about Al-Shabaab isn’t true 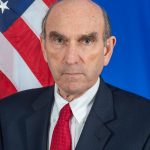 Elliot Abrams, Employee of the Month, May 2019

In recognition of a career that has never backed away from the opportunity to use Latin America’s suffering as an excuse to assert US hegemony, we have awarded the employee of the month to Elliot Abrams. The nomination was inspired by U.S. policy efforts to prompt a coup in Venezuela, but draws on a much longer history.

We begin with an October 26, 1981 memo that Abrams drafted for President Ronald Reagan, as an effort to champion a human rights policy that could be embraced by the American conservatives. In it, Abrams argues vociferously for human rights as a political ideology expressed through an American vision of  ‘freedom.’ He stresses that the U.S. ought to robustly defend human rights as a moral distinction between the West and the Soviet bloc, regardless of whether abuses are committed by foes or friendly regimes. Noting that adopting such a policy will inherently present challenges, he nonetheless writes:

[…] we still have to speak honestly about our friends’ human rights violations and justify any decision that other considerations (economic military, etc.) are determinative. There is no escaping this without destroying the policy, for otherwise what would be left is imply coddling friends and criticizing foes. (Abrams 2017, 43)

He felt the need to acknowledge the consequences of human rights hypocrisy for U.S. foreign policy and, presumably–although it’s unclear the degree to which his conception of foreign policy has much concern for any countries or people other than the U.S.—for countries impacted by U.S. policies.

Nonetheless, Abrams honed a political doctrine characterized by vigorous defense of regimes that decimated their own populations, like those in power at the time in Guatemala and El Salvador. These were places where moral posturing was rendered vacuous against the background of the hot metal of bullets piercing bodies. There were indeed choices to be made, and Abrams, along with many others (like his fellow Iran-Contra schemer, John Bolton) paraded in the garb of freedom-loving, human rights while genocidal violence was inflicted by American allies against entire populations. As a human rights campaign, genocide falls short.

In Guatemala, large-scale, systematic attacks on indigenous communities 1981-1983 killed 200,000 people. In the words of a survivor:

What did the army do on November 24 in the village of Monte Cristo? That afternoon, around 4:00 p.m., they divided up to go to the houses of the village, and captured four families, little boys and girls, teenagers, old men and women. They took them to where the army was camped and brought them before the commander. What did the commander of the army say? ‘Kill these lazy good-for-nothings, because they are with the guerillas.’ They were then killed with machetes and knives without using firearms. They cut off the head and arms of one of the women; they left her without a head and arms, and they cut open her chest with a knife. Her name was Luisa Martin. And in this manner they finished off all members of the four families (cited in Jonas, 392).

This massacre was not an anomaly—it was part of a pattern of violence repeated throughout the genocidal period of Guatemala’s civil war.

A truth commission, the Commission on Historical Clarification in Guatemala (CEH) stated that the guerrilla insurgency in fact never posed a serious threat to the government, a fact of which the government was well aware due to extensive intelligence documenting the number and capacity of insurgents. Therefore, the CEH concluded that the state deliberately magnified the military threat of the insurgency in order to subjugate and reorder the civilian population (CEH 1999, 22). Further, the CEH recognized that the “undeniable existence of racism expressed repeatedly by the State as a doctrine of superiority, is a basic explanatory factor for the indiscriminate nature and particular brutality with which military operations were carried out…” (CEH 1999, 24). Based on its findings, the CEH determined that acts of genocide were committed against the Mayan people in the four regions that it reviewed (CEH 1999, 41).

Regarding the Guatemalan government and its war effort, Abrams stated in 1983: “We think that kind of progress needs to be rewarded and encouraged.” I have not found any statements by Abrams even mitigating his former position on Guatemala; and supporting a genocidal regime is the kind of policy ‘mistake’ that any reflective human should spend the rest of their life trying to make amends for. It is not the kind of policy that should land someone a seat on the U.S. Holocaust Memorial Museum’s Council, and it is not a minor, overlooked issue that can quietly fade into backstory for new military adventurism.

Much has been written about the El Mozote massacre in El Salvador, notably by Mark Danner: where government forces tortured and then massacred a village. And again, Abrams downplayed the facts as manipulations by guerillas and their supporters.

In the U.S. government’s Latin American policy at this time, human rights rhetoric was only embraced to the extent that it served the larger policy framework of the National Security Doctrine, which supported right-wing military dictatorships. Latin American political leaders were never mere puppets of U.S. foreign policy, they innovated and developed their military and political strategies so that the Cold War dynamics would favor the protection of the privileges they accrued. Nonetheless, it is important to place any discussion of U.S. Latin American policy in the longer, consistent context of endeavors to promote U.S. hegemony in the region, so clearly pronounced in the 1823 Monroe Doctrine. The 20th century examples can be summarized in the list of places where the U.S. actively supported military coups: Argentina, Brazil, Chile, Costa Rica, Guatemala, Panama, Paraguay, Peru, Uruguay, and Venezuela. We should add the Caribbean nation of Haiti to this list as well.

None of this history absolves left-leaning dictatorships that systematically repress their people’s rights, prominent among them is Cuba. Their record demonstrated in previous decades, holds true for today as well, and returns us to the current Venezuelan crisis. Conditions in Venezuela provide ample evidence that the political stakes cannot be summed up as a simple opposition of good guys and bad guys.

Under Hugo Chavez, the state tried to improve food security concerns by entrenching itself into both supply and distribution systems, increasing the population’s reliance on the state and politicizing access. Then crisis hit in the form of the death of Hugo Chavez (2013), and a sudden drop in oil prices (2014), and the ineptitude of the new President Nicolas Maduro. Political disputes dovetailed with economic collapse in a catastrophic spiral, during which the military increasingly tightened its grip on all state functions.

People’s inability to access food, skyrocketing crime, and collapse of the health system has fueled a massive exodus from the country. Human Rights Watch, noting that since 2014 more than 2.3 million Venezuelans have left their country, cites scarcity of food, medicine and medical supplies, government crackdown, crime and hyperinflation as reasons motivating people to flee Venezuela (HRW 2018, 1). The International Crisis Group (ICG) notes that of a population of 31 million, 4 million currently live abroad and the rates of flight are still high (2018, 9). UNHCR documents a significant surge in outflows in 2017 and increasing again in 2018. A widely cited survey, “Living Conditions in Venezuela” (translation available in ICG 2018) conducted by National Survey on Living Conditions (ENCOVI) found that: 87% of the population of Venezuela is living in poverty (2017), including 61.2% in extreme poverty. What supplies are available are distributed with political bias. Until recently a prosperous upper middle income country, rarely has the world witnessed such a dramatic economic collapse as in contemporary Venezuela.

On January 25, 2019, Elliot Abrams was appointed as the U.S. special envoy for Venezuela, and U.S. policy shifted into high gear. The first dramatic sign of escalation came with a confrontation over access to humanitarian aid as bolster for the Venezuelan political opposition. The U.S. positioned aid on the unfinished Tienditas Bridge  near the border with Colombia: humanitarian aid as a taunt, daring the military to defect or else be forced to stop an opposition-led effort access the aid. Getting aid to people was irrelevant: the real point was political provocation. While people starve, both the government and opposition, backed with U.S.-made humanitarian weapons, show no signs of concern that the escalation of political crisis keeps the people on a starvation diet. True to form, Elliot Abrams struck a moral posture: the time for talks, he stated, with Maduro “has long passed.”

Today, U.S. policy official states that “all options are on the table,” but it appears to be very unlikely that direct military intervention would occur. However, and consistent with past U.S. policy, an explicit policy of forcible regime change by backing a presidential aspirant with political (and presumably financial and intelligence) support is the preferred mode of exerting control. This is what happened in a coup attempt on April 30 – May 1, 2019. But it failed. As the Los Angeles Times reported: “The White House struggled Thursday to salvage its public and covert campaign to oust the leftist president of Venezuela after the U.S.-backed opposition in Caracas sought to overthrow him this week, but failed and appeared to be losing support.”

According to news reports, there is now a battle going on within the Trump Administration: with some advocating continuing with the current resources and hardliners pushing for military intervention. As usual with the Trump administration, the debates are playing out in media statements from different views within the White House. John Bolton stated that President Trump “has been clear and concise on this point: All options are open. We want a peaceful transfer of power. But we are not going to see Guaidó mistreated by this regime.” Whereas, Adm. Craig Faller, head of U.S. Southern Command backed away from the statement: “Our leadership has been clear: This has to be, should be, primarily a democratic transition,” Faller said. “We are in total support of the diplomacy, and we stand ready to support that effort.” And Trump had a friendly chat with Russian president Vladimir Putin, a supporter of the Maduro regime. But it’s worth recalling two additional points. As the history of U.S. intervention in Iraq makes clear, threats of military intervention are sometimes followed with action. And even the threat of U.S. military intervention alters dynamics, rarely in favor of moderation that might expedite political resolution and humanitarian access.

If history is any guide, there are also broader lessons embedded in the return of neo-conservative problem-solving, spearheaded by rights-espousing Cold War diplomats.

First, it is well past time to be wary about those who view human rights policy as synonymous with U.S. hegemony. Human rights only make sense as policy when embedded in a government’s accountability to its own people. While international manipulations to the degree seen in the recent uptick in U.S. Venezuelan policy–which clearly aimed to provoke a coup–seeks to re-align power, it is not in the direction of accountability to the populace.

Second, lack of concern with such accountability in foreign countries should raise alarm bells domestically as well. The team in charge today had no qualms about engineering unconstitutional changes in government in Latin America and lying to Congress about it in previous decades. This foreign policy is not only arrogant and incompetent, it is corrosive.

Third, there are other options in Venezuela that could protect its long-suffering people from both the crass and catastrophic misrule of Pres. Maduro and the putchism of the U.S. and its clients. I suggest starting with ideas put forward by the International Contact Group on Venezuela, Washington Office on Latin America, and International Crisis Group.

Share
Tagged with: Employee of the month • intervention • US • Venezuela