New WPF Occasional Paper: A Role for Social Nutrition in Strengthening Accountability for Mass Starvation? From Camel Herder to Dictator 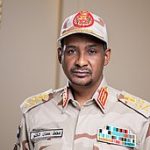 General Mohamed Hamdan Dagolo “Hemedti” is the face of Sudan’s violent, political marketplace. Hemedti’s career is an object lesson in political entrepreneurship by a specialist in violence; his conduct and (as of now) impunity are the surest indicator that mercenarized politics that have long defined the Sudanese periphery, have been brought home to the capital city. Hemedti’s Rapid Support Force (RSF), a paramilitary led by Darfurian Arabs—and commonly decried as “Janjaweed”—are today the dominant power in Khartoum.

During the peaceful democracy protests in Khartoum, demonstrators chanted “we are all Darfur” as a rebuttal to regime propaganda, trying to portray them as rebels from the far periphery. During the crackdown of June 3, in which well over 100 protesters were killed, armed men wearing RSF uniforms chanted “You used to chant the whole country is Darfur. Now we brought Darfur to you, to Khartoum.”

“Hemedti” is the diminutive, endearing name for ‘little Mohamed’, which Mohamed Hamdan Dagolo has ironically kept because of his fresh-faced, youthful looks. For a moment, in the days after the April 11 overthrow of President Omar al Bashir, some of the young democracy protesters camped in the streets around the Ministry of Defense embraced him as the army’s new look.

Hemedti’s grandfather, Dagolo, was the head of a subclan of the Mahariya Rizeigat Arab tribe that roamed across the pastures of Chad and Darfur. Young men from the camel-herding Mahariya—landless and marginalized in both countries—became a core element of the Arab militia that fought in the vanguard of Khartoum’s counterinsurgency in Darfur. Hemedti is from the farthest of Sudan’s far peripheries, an outsider to the Khartoum political establishment.

Hemedti is a school dropout turned trader, without formal education or military staff college—the title ‘General’ was awarded on account of his proficiency in fighting and bargaining. He was a commander in the Janjaweed brigade in Southern Darfur at the height of the 2003-05 war, proving his mettle on the battlefield.

In 2007-08—the year of a widespread but inchoate rebellion by many of the Janjaweed against their patrons, Hemedti was a prominent mutineer.  He led his forces into the bush, promising to fight Khartoum “until Judgment Day,” shot down an army helicopter, negotiated for an alliance with the Darfurian rebels, and threatened to storm the city of Nyala. Hemedti then cut a deal with the government, settling for a price that included payment of his troops’ unpaid salaries, compensation to the wounded and to the families of those killed, promotion to general, and a handsome cash payment. A television documentary captures his parallel negotiations with the Darfur rebels and his own government, his charm and concern for his troops—and the fact that he enlisted Arabs and non-Arabs alike in his ranks.

After returning to the Khartoum payroll, Hemedti proved his loyalty. Pres. al-Bashir became fond of him, sometimes appearing to treat him like the son he had never had. Al-Bashir reportedly called him “Hamayti”—my protector.

Hemedti has ably used his commercial acumen, military prowess—and the fact that the Sudanese establishment consistently underestimates him—to build his militia into a force more powerful than the waning Sudanese state.

On returning to the government fold, Hemedti’s troops constituted a brigade of the “Border Guards” headed by Musa Hilal, the leader of the Janjaweed. But he soon became a rival to his commander, and al-Bashir constituted his forces as separate force in 2013, initially to fight the rebels of the Sudan People’s Liberation Army-North in the Nuba Mountains. The new Rapid Support Forces (RSF) came off second best. But, with a fleet of new pickup trucks with heavy machine guns, the RSF became a force to be reckoned with, fighting a key battle against Darfurian rebels in April 2015.

Following the March 2015 Saudi-Emirati military intervention in Yemen, the director of al-Bashir’s office, Taha Hussein, cut a deal with Riyadh to deploy Sudanese troops in Yemen. One of the commanders of the operation as Gen. Abdel Fattah al-Burhan (current chair of the TMC). But most of the fighters were Hemedti’s RSF. This brought hard cash direct into Hemedti’s pocket.

And in November 2017, when his arch-rival Hilal rebelled and was captured, Hemedti’s forces took control of the artisanal gold mines in Jebel Amer in Darfur—Sudan’s single largest source of export revenues. Suddenly, Hemedti had his hands on the country’s two most lucrative sources of hard currency.

Hemedti is adopting a model of state mercenarism familiar to those who follow the politics of the Sahara. President Idriss Déby of Chad rents out his special forces for counter-insurgencies on the French or U.S. payroll in much the same manner. Hemedti has recently hired the services of the Canadian lobbying firm Dickens & Madson, which has previously contracts with Zimbabwean president Robert Mugabe and Libyan militia commander Khalifa Haftar, with the explicit aim, among other things, of obtaining U.S. recognition and Russian funding. Expect to see RSF troops deployed to Libya any day soon.

Meanwhile, with the routine deployment of paramilitaries to do the actual fighting in Sudan’s wars at home and abroad, the Sudanese army has become akin to a vanity project: the proud owner of extravagant real estate in Khartoum, with impressive tanks, artillery and aircraft, but few battle-hardened infantry units. Other forces have stepped into this security arena, including the operational units of the National Intelligence and Security Services, and paramilitaries such as special police units—and the RSF. When the democracy demonstrators surrounded the Ministry of Defense on April 6, demanding that al-Bashir must go, Hemedti was one of the security cabal whom al-Bashir convened to decide how best to break this unarmed siege. Hemedti was caught on video arguing for the use of force, though he later claimed it was his brother speaking, not him. But on the morning of April 11, he joined the army generals in deposing al-Bashir, rather than massacring the protesters. For that he won a moment of celebrity.

Unnoticed by the eyes of the media, which are focused on Khartoum, the RSF has been taking over the camps of the UN-African Union Mission in Darfur (UNAMID) as that peacekeeping operation scales down. Hemedti is positioning himself as the de facto paramilitary ruler of Darfur. (That takeover was ordered to be halted after UN protests.)

Since revolution day, unlike the army generals who have been cautious, even timid, and the leaders of the democracy protests, who have been painstakingly consultative, Hemedti has acted boldly and decisively. He saw that state power was lying in the streets of Khartoum to be seized by whoever had the audacity to take it. Hemedti took it: he realized that after decades of eviscerating political institutions, power in the capital functioned no differently to in lawless Darfur.

As negotiations between the generals and the democracy protesters dragged on, Hemedti repeatedly threatened to clear the streets by force—and several times, his soldiers opened fire, killing or wounding one or two.

Then, after al-Burhan and Hemedti visited Saudi Arabia, the UAE and Egypt, the TMC appears to have decided that it could impose military rule without facing anything more than empty protests from the international community. On June 3, Hemedti’s RSF brought his Janjaweed methods to Khartoum. His forces rampaged through the city, beginning with the camps of the protesters, burning the tents, often with people inside. More than 100 were killed. Many were raped. Many were chased through the streets, hunted down in their neighborhoods. They rampaged through the university campus. The RSF fighters terrorized Khartoum.

Hemedti denies this, and avers that an independent investigation will exonerate him. And indeed, most close observers think that it is possible that he intended a limited attack, and that elements from the ousted intelligence services of the former regime took the opportunity to escalate the violence, tarnish Hemedti’s reputation and divide him from the generals in the Transitional Military Council.

Whatever the true story, Hemedti is a specialist in violence and should have seen it coming; he can’t complain if his own methods are used against him.

On 29 June, the TMC accepted to negotiate on the basis of a power-sharing formula proposed by the Ethiopian mediation. But the same day, the RSF broke up a press conference by the AFC, and the following day—30 June, the African Union deadline for a handover of power to a civilian authority—broke up the democracy forces “millions march” with tear gas and live bullets, killing seven.

But there’s also a twist to the story. Every ruler in Sudan, with one notable exception, has hailed from the “Awlad al Balad”—the heartlands of Khartoum and the neighboring towns on the Nile. The exception is deputy and successor to the Mahdi, the Khalifa Abdullahi “al-Ta’aishi” who was a Darfurian Arab, whose armies provided the majority of the force that conquered Khartoum in 1885. The riverian elites remember the Khalifa’s rule (1885-98) as a tyranny. They are terrified it may return. Hemedti is the face of that nightmare, the first non-establishment ruler in Sudan for 120 years.

The other side of this coin is that Hemedti has opened negotiations with the armed rebels in Darfur and the Nuba Mountains, and he may have the clout and the credibility to cut a deal with them. Despite the grievances against Hemedti’s paramilitaries, the Darfur rebels still recognize that he is a Darfurian, and they have something in common with this outsider to the Sudanese establishment.

When the Sudanese regime sowed the wind of the Janjaweed in Darfur in 2003, they did not expect to reap the whirlwind in their own capital city. In fact the seeds had been sown much earlier, when previous governments adopted the war strategy in southern Sudan and southern Kordofan of setting local people against one another, rather than sending units of the regular army—manned by the sons of the riverain establishment—into peril. Hemedti is that whirlwind. Immediately, he is the boomerang of Janjaweedism that has returned to strike Khartoum. But his ascendancy is also, indirectly, the revenge of the historically marginalized. The slogan “we are all Darfur” must be more than an expression of solidarity with the victims of the Janjaweed, but also a far-reaching restructuring of Sudan to address the causes of the recurrent wars in the peripheries.

The tragedy of the Sudanese marginalized is that the man who is posing as their champion is the ruthless leader of a band of vagabonds, who has been supremely skillful in playing the transnational military marketplace.

“Hemedti” is employee of the month as the representative of that inhuman logic of paramilitary mercenary politics.