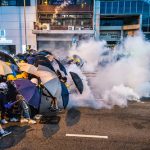 What is the WPF ‘Employee of the Month’? Learn more here.

China is in a quandary. Uncowed Hong Kong protesters are forcing Beijing to confront its version of the question plaguing global politics: how much discontent can be stifled while still reaping the benefits of liberalized global economy? It is the one-party state version of a similar game being played in western democracies. Economic-political elites are everywhere attempting a delicate maneuver: maintain free flow of financial capital that is the source of their wealth and privilege, while  diluting and diverting expressions of popular discord produced by the resulting gross inequalities of wealth. In each location the dynamics are distinct; everywhere the official responses refuse to face the root of the problem.

Thus far, the state response does not seem to be working in Hong Kong. Protesters have shown remarkable ingenuity and commitment (see this article and this video for some of the innovations adopted by protesters). The police waver between direct confrontations (including laser battles between protesters and police), and stepping aside to let others do the dirtiest work. In a July 21st incident captured in video by the NYT, police give way when “white shirt” pro-government brutalists, reportedly on hire from the Triad crime group, assault protesters.

Yet the protests continue. As protesters have made clear, opposition to the single issue of extradition to China has transformed into expressions of wider grievances against the state. While Beijing has offered some palliatives in the form of better affordable housing, these moves may be, as Antony Dapiran argued in the Guardian, too little, too late. In a historic move, Hong Kong’s civil servants hit the streets on August 2, in support of protesters and demanding the government take concrete measures to engage the protest movement. As one government worker stated: “I think the government should respond to the demands, instead of pushing the police to the frontline as a shield.” The weekend and next week promise even more mass strikes.

The Hong Kong police issue terse press releases, espousing their commitment to rule of law. One from July 31st, following a protest in front of the Tin Shui Wai Police Station asserted: “Police are capable and determined to maintain law and order and will not tolerate any violence.” For now, Beijing is backing them up and authorizing a more aggressive posture:

“For some time, the power of the Hong Kong police has been severely limited by politics, public opinion, and even the judicial environment,” said one editorial, describing protesters as “thugs” and “militants” who have undermined stability in Hong Kong.

Facing these circumstances the Hong Kong government and police should not have any hesitation or any ‘psychological burden’ – do what needs to be done.” The article called on the police to “punish lawbreakers regardless of whether they hold up the banner of ‘freedom and democracy’ or wear the cap of ‘civil disobedience.’”

Given the Chinese state’s unhesitant crackdowns on mainland rights advocates and minority groups, (like the Uyghurs), its response to demands from Hong Kong protesters clearly shows that if it is restrained, that’s only because it is protecting its own interests. Beijing needs the two systems as much as Hong Kong does. Chinese leaders transformed an awkward post-colonial political construct of ‘one country, two systems’ into a virtue: Hong Kong became a critical access point for global finance. Now it faces a decision point. There are high reputational and, potentially, economic risks if it conducts the same kind of severe crackdown (which given the record thus far of the police, may well necessitate deploying the military), that it has demonstrated elsewhere. But the continuing protests also incur risks for China’s political status quo. It is not a state accustomed nor well-suited to respond to popular demands voiced through protest.

Thus far, Beijing has indicated that it is willing to blame foreigners, radicals and rioters, and even Hong Kong’s Chief Executive Carrie Lam, and to stick with the increasingly inept response of the police, but it nonetheless sends out warning flares that more authoritarian measures are conceivable.

Until then, the front lines are manned by the police. With regular, escalating encounters between protesters and police, global issues come to a head as a single baton strikes a body. Confrontation, casualties, teargas, arrests and intimidation haven’t yet deterred the committed protesters, and only exacerbate efforts to address the real problems.