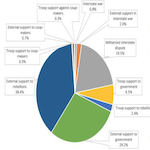 WPF with our partners at the Conflict Research Programme are pleased to announce the publication of a new occasional paper, “Introducing the Transnational Conflict in Africa Dataset,” by Allard Duursma, Noel Twagiramungu, Mulugeta Gebrehiwot Berhe and Alex de Waal (August 2019). Below is an overview of its key points. The full paper can be downloaded here and additional resources can be found on our website.

This paper first explains the need for capturing transnational conflict in Africa, after which the coding procedures for the TCA dataset are described. Next, some descriptive statistics are presented. The subsequent section discusses the challenges and possible options for future research. The final section concludes that the conventional wisdom that Africa has experienced little interstate conflict is stood on its head: the majority of African conflicts must be considered internationalized-internal.

The emergence of conflict data is tied to the behavioural revolution in the social sciences. In the late 1950s, several scholars began to study armed conflict through using formally stated arguments and systematic empirical analysis (Gleditsch et al., 2014; Clayton, 2014). Building on the pioneering work of Lewis Fry Richardson, who had gathered conflict data on what he described as ‘deathly quarrels’ from the 1930s and published a seminal study on these data in 1948 (Richardson, 1948), David Singer established the Correlates of War (COW) project at the University of Michigan in 1963 (Small and Singer, 1982). The rationale for the start of the COW project was to uncover the causes of large-scale armed fighting between states, though COW project later also began looking at civil wars.

The COW data has helped generate many important insights, yet the COW data on interstate wars in Af- rica seriously underrepresents the level of transnational conflict in Africa. For instance, based on COW data, Lemke concluded that Africa was distinct from other continents in that it had disproportionately many fewer interstate wars (Lemke, 2003: 119). While it is true that the number of interstate armed conflicts in Africa is relatively low in comparison to other regions of the world, Africa has seen very high levels of external support in ‘civil wars’, as well as many low-intensity violent confrontations between states.

Several datasets exist that capture some elements of interstate and transnational violent conflict in Africa. The Militarized Interstate Dispute (MID) dataset compiled by the Correlates of War (COW) project focuses on low-intensity military confrontations be- tween states (Jones et al., 1996). The Uppsala Conflict Data Program (UCDP) External support data- set focuses on external support to conflict parties in the form of troops, funding, logistics, military equipment, intelligence, and safe havens (Petters- son, 2011). These datasets have been used to generate important findings with regard to the role of MIDs (Senese and Vasquez, 2008; Mitchell and Prins, 1999) and external support (Salehyan et al., 2011; Sawyer et al., 2015) respectively. Yet, a comprehensive dataset that captures a wide array of transnational conflict does currently not exist.

The TCA not only integrates existing data on armed conflict in Africa. Through a process of research based on secondary sources and expert interviews, the TCA also includes new data for cases that fall beyond the temporal scope of existing datasets or cases that are overlooked in the existing datasets. The next section explains the coding procedures that have guided the structure of the TCA.

The full paper and additional resources are available on the WPF website.