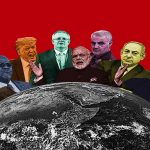 Employee of the Month January 2020: THE FAR RIGHT

The first week of the new decade has seen such a spate of outrages against world peace that it is remarkably difficult to chose a single candidate for the World Peace Foundation Employee of the Month. But there is a common thread among the leading candidates: they are all from the new, disruptive manifestation of the far right. Our collective nomination identifies nine individuals, each of them engaged in the signature activities of the new far right: promoting hatred between groups; branding liberalism and multilateralism as a conspiracy; elevating passion over reason, ignorance over learning; dismantling institutions that have delivered incalculable benefits such as learning, prosperity, and peace; treating politics as a game without rules in which anything is justifiable if you can get away with it.

Tanzania’s John Magufuli followed up on last year’s anti-homosexual pogrom with a new crackdown on the media  (an emergent exemplar of a standard rightwing autocrat’s playbook).

Indian Prime Minister Narendra Modi, for the violent mob attack on New Delhi’s Jawaharlal Nehru University (JNU), which if he did not directly authorize, sprang directly from his encouragement of sectarian bigotry.

Australian Prime Minister Scott Morrison, for playing with fire, namely his tenacious willful blindness to the science of climate change and its looming human consequences in the pursuit of profit and power.

Advisor to the British Prime Minister Dominic Cummings, for his rambling call for ‘super-talented weirdos’ to serve him in No. 10 Downing Street, with the intent of disrupting the civil service, (a call that is probably against Britain’s employment law).

Israeli Prime Minister Benjamin Netanyahu for scheming every possible way to remain in power despite criminal indictments against him for corruption, that render him ineligible to serve as a government minister—but not, it seems, as an acting minister, nor, according to his lawyers, as prime minister.

Brazilian President Jair Bolsonaro’s appointees, who would might be candidates for Cummings’ recruitment save for their conspicuous lack of talent other than sycophancy specializing in the amplification of their leader’s personality traits that are most mocked by reasonable people.

Special mention must go to commander of the Iranian Quds Brigades, Qassim Suleiman. This is our first posthumous award, but an exception can be made for this lifelong champion of sectarian intolerance for whom death—martyrdom—was neither unwanted nor unsought. Since his days as a young commander on the frontline of Iran’s murderous war with Iraq in the 1980s, he has reveled in the battlefield and its slaughter. Feared, hated and admired, he was also prominent member of the brotherhood of intelligence chiefs (an older brand of the political right) who, whatever their masters’ strategic rivalry, play the same cynical game in which slaughter and terror are justifiable means towards an end.

The most prominent, powerful and dangerous of our winners this month is U.S. President Donald J. Trump, singled out for his assassination of Qassim Suleimani along with the commander of Iraq’s Popular Mobilization Forces, Abu Mahdi al Muhandis. Until now, President Trump’s principal foreign policy achievement was not to have embroiled the United States in any new wars. By committing a high-level political murder, and advertising the fact, the U.S. Commander-in-Chief has declared war on Iran, in a lawless manner that invites a lawless response. It is unclear whether its illegality or its recklessness is more egregious. There are far too many uncertainties in the aftermath of the assassination to know whether this will indeed ignite a new region-wide war across the Middle East, or counter-strike high-level political assassinations by the Iranians, or further attacks by the U.S. and its allies on Iran’s nuclear facilities and/or cultural sites. Only two beneficiaries are clear: arms manufacturers (whose stock immediately rose) and those who celebrate mayhem, as the toxic soil from which the far right draws its nourishment.

Share
Tagged with: Benjamin • Employee of the month • Far right