Why Ethiopia is in deep trouble, and how it got here

By Mulugeta Gebrehiwot Berhe On February 3, 2020

“Why Ethiopia is in deep trouble, and how it got here” by Mulugeta G. Behre is originally published in The Conversation, February 2, 2020

Ethiopia has seen dramatic transformation and change over the past century. Two of the biggest changes were the victory in 1991 of the Ethiopian People’s Revolutionary Democratic Front which has remained the dominant party ever since and, more recently, the accession to power of Ahmed Abiy as Prime Minister.

I have been intimately involved in Ethiopia’s politics since the early years of the formation of the Tigray People’s Liberation Front in 1975. I served as a member of the leadership of the ruling coalition for the first eight years it was in power. I have also written extensively on its successes and weaknesses. This includes a recently published book, Laying the Past to Rest: The EPRDF and the Challenges of Ethiopian State-Building.

In the book I trace the history of the coalition, and review its performance in power up until 2012. I discuss how the Ethiopian People’s Revolutionary Democratic Front fell short in its state building project by failing to make an effective transition from leading a war to leading a government.

The coalition nevertheless made some remarkable achievements. The most notable was the fact that millions of Ethiopians were lifted out of poverty. But the most recent change in Ethiopia’s leadership portends, in my view, a dangerous period for the country.

Over the last 29 years Ethiopian politics has moved from a centralised political system under Meles Zenawi into a what I call ‘rivalrous oligopoly’ towards the end of Hailemariam Desalegn’s period. Unity of purpose of the coalition members was lost as each competed for dominance.

Under Ahmed Abiy it has moved further into open market competition where most coalition members have ceased to exist as organised units. Their leaders are divided into groups fighting against each other for dominance.

The conclusion I draw is that, despite the economic liberalisation Abiy’s regime has started, Ethiopia is far from running a meaningful reform agenda. More worryingly, I believe it is fast moving towards becoming a failed state.

The Tigray People’s Liberation Front was created as a nationalist armed rebellion against the military regime that ruled Ethiopia for 17 years. In the process of its armed struggle it created successful alliances with other Ethiopian opposition forces. This led to the creation of the Ethiopian People’s Revolutionary Democratic Front coalition, which expanded the rebellion to the rest of Ethiopia. This coalition finally took power in May 1991 after a protracted 17-year war.

After taking power, the Tigray People’s Liberation Front-anchored EPRDF set about restoring democratic rights and installing a democratic system of governance. It set about building a federation made up of a number of states based on national identity.

The coalition achieved some remarkable successes. For example, the objectives of ensuring economic growth and reducing poverty were largely successful. Over a period of 15 years, from 2000 to 2016, the World Bank listed Ethiopia as the fastest growing economy in the sub-Saharan region. In addition, life expectancy was lifted from 47 years in 1991 to 65 years in 2018.

The country also enjoyed its longest peace time in history – over 25 years.

But the coalition did less well in achieving democracy and embedding a democratic form of governance. Over time the organisation moved away from its revolutionary and progressive political objectives. Instead it became an instrument for the rent-seeking objectives of its leaders and members.

In their bid to stay in power, the former revolutionaries took to trying to ride waves of populism. On top of this, loyalty to leaders of the coalition – and not competency – became the key criteria for filling the ranks of the party and the state. And the party became fused to the state. It lost its autonomous identity and impeded the building of independent institutions crucial for democracy.

This meant that the benefits of economic growth weren’t universally shared. Trade-offs were made between maintaining hot-house growth levels and dealing with welfare and equity. But the establishment failed to optimally manage these trade-offs. It also failed to meet, or manage, the expectations of Ethiopia’s educated young people.

There were many drivers behind the coalition’s limitations.

Firstly, there was the incomplete transformation of its wartime leadership style and organisational culture. This included holding onto inheritances from the armed struggle. These included a binary categorisation of enemy versus friend, a strong emphasis on secrecy over transparency and a highly centralised approach to leadership.

Secondly, the tendency to stick firmly to ideologies undermined the need to create partnerships with political elites in opposition. On top of this, its comfort to live as a dominant party meant that it didn’t create an enabling environment for a pluralist democracy.

These were the seeds for the later chaos. In addition, problems in the coalition were exacerbated and accelerated by the loss of its long-serving chairperson, Meles Zenawi. As prime minister from 1995 until his death in 2012 he ran the country from the centre with formidable political skills.

His successor Hailemariam Desalegne had neither the vision nor the skill to maintain the status quo. The country drifted, eventually forcing Hailemariam to resign. He was replaced by Abiy. 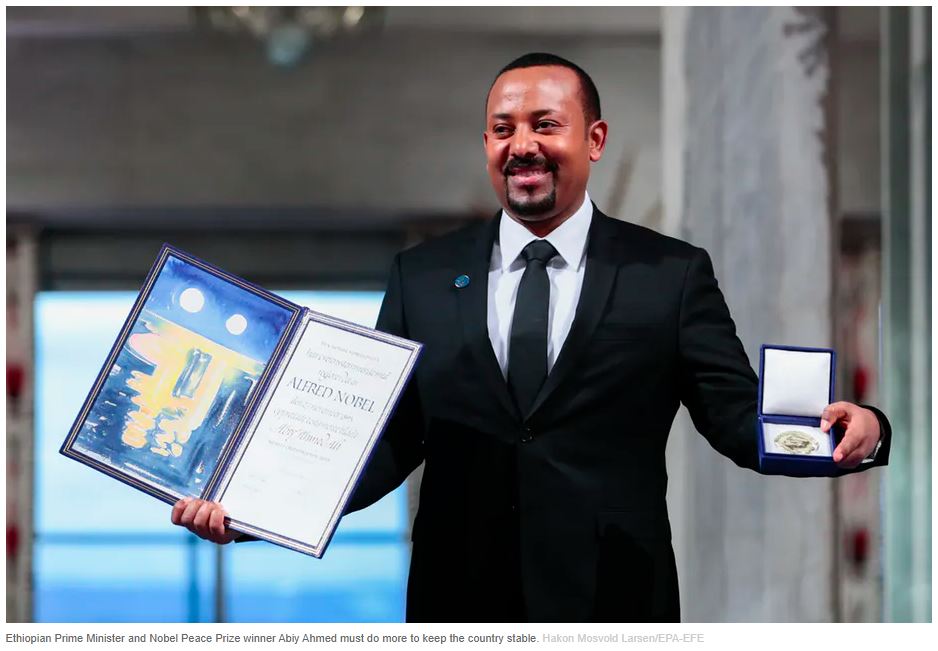 There are signs that Abiy’s reign is in difficulty. This isn’t surprising as he came to power through contest and competition rather than the long-held tradition of consensus-based decision making.

He then took a number of steps that have alienated key players in the coalition. For example, he opted to try and create a new constituency by funnelling an anti-establishment agenda. He’s also trying to move the coalition towards a unified party.

The Tigray People’s Liberation Front disagrees fundamentally with this. Resentment towards him is deepening.

The country is entering a dangerous phase. Violence has broken out in a number of regions and many are under an unofficial state of emergency. The central government has shown that it’s incapable of maintaining law and order. This has resulted in an unprecedented number of internally displaced people.

In addition, most universities are incapable of running their yearly academic programmes. Over 35,000 students have left their schools as a result of instability.

If the slide is not arrested, the complete collapse of the state seems imminent.

There are steps Abiy could consider. These include releasing all political prisoners, freezing new government policies except budgeting decisions, and creating a joint consultative body made up of representatives of all political groups to work on ensuring upcoming elections are run smoothly.

I would also argue that the current administration should stop talking about reform and liberalisation. In the current climate this is tantamount to scavenging a nation.

Mulugeta G Berhe is a  Senior Fellow at the World Peace Foundation, The Fletcher School of Law and Diplomacy, Tufts University

One Response to Why Ethiopia is in deep trouble, and how it got here