Bashir to The Hague? Omar al-Bashir: Will genocide charge against Sudan’s ex-president stick? 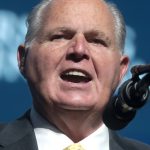 Competition remains high for 2020 employees of the month! However, one person was elevated above the others in recent days: Rush Limbaugh. His self-description captures the bombast: “the ‘Doctor of Democracy,’ is known as the pioneer of AM radio. Limbaugh revolutionized the media and political landscape with his unprecedented combination of serious discussion of political, cultural and social issues along with satirical and biting humor, which parodies previously ‘untouchable’ personalities and topics. His passion inspires millions of Americans to be the best they can be and keeps the country on course to a bright future.”

Others would counter, as does David Remnick in The New Yorker, that Limbaugh “derives from a line of radio bigots.” His career is laced with racism and misogyny. One example: Limbaugh’s repeated scorn for the American Latino community, as noted by Paul Reyes:

“Limbaugh has reserved particular scorn for Latinos, consistently using his platform to conflate Latinos with illegal immigration and crime. In 2009, he questioned why Latino advocacy groups would lobby for the Affordable Care Act, since “illegal aliens” would not be eligible for coverage. In 2013, he inaccurately described Mexican immigrants as lazy and government-dependent. In 2019, he compared the Allied troops landing in France on D-Day to migrants at the U.S. southern border, calling the latter “an invasion force.” Such words have had the effect of poisoning the debate around immigration.

Limbaugh’s ugly rhetoric about Latinos is so pervasive that his words were cited by the New York Times in an analysis of the possible ideological inspirations of the gunman who carried out the mass shooting in El Paso.”

Limbaugh’s own words make the strongest case for his nomination and award. Below, he provides insight into his communication strategy, premised on fueling anger between groups, in a segment where he dissects President Trump’s strategies:

“I don’t think this is complicated. But, if you are refusing to try to understand Donald Trump as the Never Trumpers are and as the left is, and if you’re not curious, if you really don’t — if you just want to continue to plug Trump into the standard operating political system that you’ve got, you’re gonna forever be in the dark here.  The one thing that people on the left cannot do is laugh, particularly at themselves.  They have no nuance. They have no sense of nuance about humor.  To them, humor is insulting.

It insults minorities or people of some disadvantage here or there, and they are just incapable of laughter.  I plainly will tell you what Donald Trump was doing, and he may not even know it.  This may just be instinctive with him.  Sending out a tweet claiming to strip the citizenship of flag burners and maybe put ’em in jail was to accomplish two things:  He was sending a message of how he thinks about it, what he thinks about people that do that, and, more importantly, how much he loves America and its symbols.

The second thing he was doing was tweaking them.  He wanted more flag burning.  He wanted ’em to go out there.  He was tweaking them like I tweak the media.  He was taunting them.  He wanted these extremist wacko protesters to get so mad they started burning even more flags because he knows that the more leftists start acting deranged and unhinged, the greater the benefit for him, the more normal he looks, the greater he looks.  He was elected, in large part, because of these people and their behavior.