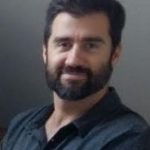 This interview is part of a series, speaking with researchers whose previous work has been on international issues and who are now focusing on issues within the United States. Bret McEvoy is a doctoral candidate at The Fletcher School of Law and Diplomacy (Tufts University).  His research looks at why and how dominant racial and gender groups challenge the systems that preserve their dominance, with his dissertation exploring white-dominated anti-racist projects that aim to take greater responsibility for transforming the structures that perpetuate racialized violence and inequality in the United States.  Previously, he has worked in several capacities in humanitarian assistance and human rights, having managed humanitarian programs in a number of disaster, conflict and post-crisis environments.

My research has traditionally focused on transitional justice (reparations), human rights and humanitarian law violations occurring during armed conflict, and gender/masculinity.  As my work began to shift towards the U.S., it retained its emphases on transitional justice (reparations) and gender, but also engaged more prominently with structural violence, race/whiteness, and the method/ology of reflexivity.

I was confronted by the partial voyeurism or savior mentality of my work abroad, and began to appreciate that an analysis of ‘the international’ from the perspective of a power holder in that global system – as a class advantaged white male and citizen of the United States – may be deeply problematic if not first emerging from a critical sense of self and ‘the domestic’.  This coincided with an increasing personal participation in local U.S. politics, and a growing recognition that the conceptual frame of transitional justice was as applicable to longstanding settler democracies as it was to nations emerging from war.

I explore the project of anti-racism undertaken by white people in the United States, and its aim that white people take greater responsibility for transforming the structures that perpetuate racialized violence and inequality.  While white anti-racist activists endeavor to center the needs of people of color as a guiding orientation, challenging systemic white supremacy often provokes a corresponding need for white people to engage in their own racial identity development work.  Through participant observation, in-depth interviews and critical reflexivity with a Boston-based multiracial organization that, for 50 years, has focused on engaging white people as a critical component of dismantling white supremacy, I investigate the tensions that arise between the individual identity-based needs of white anti-racist activists and their broader goal of structural change in support of people of color.

My shift was a move away from studying the ‘other’ and towards an interrogation of ‘self’.  While turning towards the U.S. need not entail such a deep dive internally, I imagine that any U.S.-Americans who move from international research towards the U.S. would find at least some aspects of the subject matter unique in their personal familiarity.  In such a way, I found it challenging and stimulating to reorient towards a practice of “making the familiar strange”.  As the U.S. is* my home, and my research site was local, I also found it exceedingly difficult to step away from the work, and to justify my research as separate from or more pressing than “the work” (of activism) itself. (*My partner is European, and I currently live abroad).

As the U.S. is often confined to ‘the domestic’ when viewed from a U.S. standpoint towards ‘the international’, my peer networks initially shifted dramatically away from academic colleagues and towards the key informants and co-participants within my research site, who had much more to teach me about the particularities of the U.S.  Within international relations circles, I often encountered exclusion, skepticism and a general belief that the U.S. was not “our” area of expertise.  “What are you doing here?” was a common refrain at conferences.  As I now consider my next research project and/or professional step, I remain stuck in the space between the domestic and the international.

I noted previously that my shift towards greater reflexivity as method/ology was not necessarily specific to the geographical move to the U.S., but my research has begun to place a much greater emphasis on subjectivity in the process.

How do you think your work on US issues will impact your international work?

I now have a deeper appreciation for the ways that colonial/imperial power structures the global system.  No longer do I consider the possibility that the international can be understood without knowing the domestic.  By that I mean, I no longer approach a conflict “out there” without seeing that conflict’s originating ties to power amassed by the United States and other global proprietors.