A domestic turn: interview with Bret McEvoy Recommendations for Creating a Theory of Change for Violent Political Marketplaces 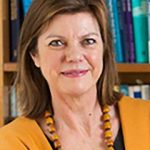 This interview is part of a series, speaking with researchers whose previous work has been on international issues and who are now focusing on issues within the United States. Karen Jacobsen is the Henry J. Leir Professor in Global Migration at The Fletcher School of Law and Diplomacy and the Friedman School of Nutrition, and directs the Refugees and Forced Migration Program at the Feinstein International Center. Professor Jacobsen’s current research explores urban displacement and global migration systems, with a focus on the livelihoods and financial resilience of migrants and refugees. In 2013-2014 she was on leave from Tufts, leading the Joint IDP Profiling Service (JIPS) in Geneva. From 2000-2005, she directed the Alchemy Project, which explored the use of microfinance as a way to support people in refugee camps and other displacement settings.

My work has been mostly on looking at refugees and internally displaced people (IDPs), and migrants in other countries – Africa and the Middle East primarily. My focus is on why they migrate, what happens when they transit, and what happens when they arrive where they intended to go. I am interested in what happens both to people and to places as a result of people leaving and arriving. I study host populations and how they respond to refugees, and have developed a methodology that compares the experience of refugees and their non-refugee neighbors especially in urban settings. I always ask, what about the host communities? How do they fare and compare with those who are newly arrived? The approach samples an area, a neighborhood, where refugees are known to live in a city. We survey the whole neighborhood – host population and refugees — and then compare their experiences and situations.

It started with Hurricane Katrina and American IDPs. This was perceived as a one-off, and the discussion of IDPs was more rhetorical, concerned with how we describe people who flee their homes. After Trump won the Presidential election in 2016, there was a massive shift in the government’s position regarding refugees, both those trying to come in and those who were already here. This shift made me want to look at how American towns and cities have responded, so I started the Refugees in Towns project

The Refugees in Towns project began with American towns then expanded to look at towns and cities globally. We’re interested in how refugees become integrated — what enables them and what problems and obstructions they face. Trump’s administration made us realize that it is not just other countries that have refugee problems; we do as well. In response to Trump, many towns pushed back against the federal government. This includes sanctuary cities, but also many towns in the U.S. tried to help refugees integrate, both through civil society actions and through municipalities passing regulations . Other towns adopted policies and attitudes that were more anti-immigrant, anti-refugee. One town next to another might be very different. It often depends on the mayor’s position. It’s not exactly clear why neighboring towns differ. Our project explores the factors that explain towns’ responses.

One thing we’re interested is broad patterns that might distinguish regions. Are patterns of integration different in the US, or do we need to disaggregate the US further, too. Is it different in small towns, in the Midwest or on the Coasts? Is every place different or are there patterns?

Our project uses a relatively new methodology. Instead of sending in researchers, we identify and commission people in towns, often refugees, who are cognizant of integration issues. Then we train them to do research and to write a case study, and partner them with our graduate students at Fletcher.  Our Refugees in Towns project now has almost 40 cases from the US and North America, Europe, the Middle East and Africa.

In general it’s much easier to work in the US. Our researchers and students often do case studies of the towns they’re from, they know the place and they can do the research more easily because they have good access and understand the town’s people. Sending foreigners to places they’ve never been before is much more difficult. There are all kinds of language and cultural interpretation problems, and in other countries, the places we go are sometimes insecure. When people conduct research in places they are familiar with, the process is easier and results are much more useful!

My own research position has changed. I used to do only quantitative research. Now, I am very interested in the emotional involvement people have in a place, in what it means to be a researcher, what a researcher brings to the research – what we call reflexivity. In their case studies, our Refugees in Towns researchers discuss their own positions in their towns, they talk about how they feel about the issues they’re writing about. They try to surface their prejudices and biases, to bring it right into the open: they address what they are bringing to the table. In traditional research, we pretend we’re objective, and it’s just not so. With this project, we’re going the other way, not to push away stuff, but be transparent and clear about what you bring. Let it shine through the case. This is my understanding, recognize your own issues in a place. If I were to do a case study of my town, Brookline (Massachusetts), I’d have to be really conscious of what biases and beliefs about the town I’m bringing to the study. On other hand, I’d really know how to find informants and to map the place. There are pluses and minuses to working reflexively, and I’m really interested in how such research works.

Do you think your work on US issues will impact your international work?

Yes, for sure. It already has. Our RIT project has applied our insights from the US to other countries, and we bring our understanding gleaned from other countries to the US too.