The Literature of Accord Introducing ‘African Arguments- Debating Ideas’ 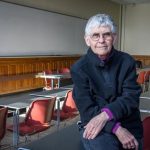 This commentary is part of a series highlighting researchers whose work crosses the borders between international and domestic issues. Cynthia Enloe is a research professor in the Department of International Development, Community, and Environment (IDCE), and is affiliated with both the Political Science Department and with Women’s and Gender Studies at Clark University.

Just this morning, the Tokyo  editor of the forthcoming Japanese language edition of The Big Push sent me some paragraphs that she is suggesting could be deleted in the Japanese edition – mainly simply to make room for the added “Preface for Japanese Readers” that she has asked me to write.
It was as I was looking at the sentences that she proposed could be deleted that I realized how important it is to me – to me, as a US-based feminist researcher/teacher/writer — NOT to slide into American parochialism and especially NOT to make that slide now,  in this era of Trump and Trumpism.

The sentences which this hardworking Tokyo editor suggested could be left out are those that I wrote precisely to underscore how transnational were the myriad January, 2017 Women’s Marches. Those historic women’s marches were not carbon copies of each other. While they were fueled by a common sense of urgency to visibly challenge patriarchy, the marchers in Belgrade were not simply mouthing slogans of the marchers in Washington, and the marchers in Paris were not merely featuring on their banners the same slogans as the marchers in Mumbai.

Yes, the rise of Trump and Trumpist ideas and actions have meant that I’m perpetually mobilized, that every day now I am hyper attentive to the damage that he and his supporters in Congress and in state legislatures are doing to the US and its most vulnerable residents.

But, for me, that constantly galvanized way of living my daily life today does not make me less interested in understanding what particular pressures my Turkish or Korean feminist colleagues are facing. In many ways, I now feel more connected to them – and more responsible to them – than ever.

We are all in this together. That is what this fraught era has taught me.

The Trumpist “MAGA” slogan – and the racist, misogynist, nationalist fantasies that underpin it – make me more than ever conscious that, to understand and be effective here in the US, I must keep learning from the feminist analysts and activist thinkers in Iceland, Japan, Colombia, Syria, and India.