On Rohingya identity in conflict: Interview with Elliot Prasse-Freeman A Typology of Corrupt Third-Parties in the Legal Arms Trade 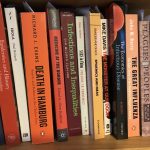 Thinking Critically in a Pandemic

My essay “New Pathogen, Old Politics” published in Boston Review concludes with a section “thinking critically in a pandemic”—the intent of the whole piece.

My thinking began as re-reading of books that I had been planning to discard. My bookshelves are full, and every year or so I clear out a shelf in my office library to make space for newcomers. This January, it was the turn of nearly a hundred books on the politics and economics of public health, mostly HIV and AIDS but also including quite a few books on the history of epidemics, along with a collection on disaster management. Most of these I had acquired while working with the Commission on HIV/AIDS and Governance in Africa (CHGA) at the UN Economic Commission for Africa and the HIV/AIDS, Conflict and Security Initiative (ASCI) at the Social Science Research Council. They moved to become piles on my office floor, waiting for the librarian at the Ginn Library at the Fletcher School to see if there were any she wanted. Ironic timing.

I re-read about fifteen; some in detail, some skimming. Of course, this selection isn’t systematic let alone complete: it was what I had on hand when the corona-lockdown began.

The book I chose to structure the essay is Richard J. Evans, Death in Hamburg: Society and politics in the Cholera years, Second edition, Penguin 2005. There’s a simple reason for that: it’s the best. I hope I can be forgiven for my many simplifications of Evans’ extraordinarily rich account. The politics of Hamburg’s cholera epidemic of 1892 illuminates how shared but contested practices, emerging disciplinary matrices and petty professional malices combined with the exercise of power in the manner of Michel Foucault’s histories of biopower. My aim was to alert us to some suggestive parallels with today, while also reminding us of the difficulty of making evidence-based policy amid real uncertainty and painful trade-offs among competing goals and value systems. I am confident that readers will realize at once why I chose this particular case over its competitors (e.g. influenza or yellow fever): cholera in Hamburg in 1892 was a politically-charged epidemic in a way that is compellingly salient today.

I scripted the essay as a drama with five subplots. First; science contends with theology, superstition and fatalism. This isn’t such a simple morality tale as it seems, because even the best, most up-to-date medical science contains uncertainties, while some practices we now dismiss as superstitions are shared practices based on long histories of what has actually worked, more-or-less. The whole apparatus of public health—quarantine, isolation, case tracking, disinfection—was developed centuries before pathogens such as bacilli and viruses were identified and modes of transmission properly known.

Second, the germ theory of disease disputes with ecological or local conjunctural theories. These debates took one particular form in the 19th century, but the broader questions of specifics of the pathogen versus the role of individual and environmental susceptibility are alive today. Although COVID-19 has refocused our attention on contagion, the contextual and ecological dimensions of disease shouldn’t be overlooked.

Third, militarized centralizing bureaucracy spars with liberalism and liberal capitalism. This alerts us to the contrary tendencies of the administrative state molded on military-like hierarchy and citizens’ obedience, and the libertarian reflexes of corporate capitalism. Among the more intriguing pathways that I didn’t explore is why Marxists never took disease seriously as a factor in political struggle. Trotsky remarked that “war is the locomotive of history” and his fellow communists tended to assume that diseases had simply hitched a ride on that train. To put the martial metaphor (such a common and commonly misleading one in the context of public health) to a different use, it is puzzling why the socialist left surrendered the terrain of public health to the bourgeois reformers when it could have been a field of class struggle.

Next is the anthropocentric “epidemic narrative” that promises a return to the safety of life-as-normal wrestling with the logic of evolution operating on different timescales from the microscopic to the macro-ecological. Pathogens are not aliens; they are part of us and the ecosystem that we increasingly dominate and shape.

And lastly, returning to the opening: a democratic open society questions its limits. No questions are fully resolved: the villain in one sub-plot may be the hero in the next, and vice versa. Scientific rationality certainly defeats superstition, but we must beware of its hubris.

For my political history of epidemics, I draw heavily on two edited volumes, each of which provides fine historical scholarship. Both are highly recommended:

The most recent book in the list is Paul Richards, Ebola: How a People’s Science Helped End an Epidemic, London, Zed, 2016. This is the kind of book that only a social anthropologist, with a lifelong commitment to an empathetic appreciation of common people’s astute understanding of their predicament, could have written. It is in many ways a twin of Richards’ first book on Sierra Leone, Indigenous Agricultural Revolution (1985), illuminating aspects of “people’s science” that are too easily overlooked by outside experts. The case of the people’s epidemiology of Ebola is, for me, a clinching argument that shows why a democratic public health is not only possible, but necessary. Richards’ hope-laden conclusion is that, “it is striking how rapidly communities learnt to think like epidemiologists, and epidemiologists to think like communities.”

The other books piled on my floor, or back on the bookshelf, include: