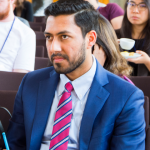 This essay is part of a series, Fletcher Voices. WPF invited students at Tufts University’s the Fletcher School for Law and Diplomacy to submit short essays reflecting on the impact of coronavirus. Archish Mittal is a first year MALD student, currently residing in Boston. His field of study is Middle East, Islam and South Asia.

On Friday, 3rd April, the Indian government lodged a complaint against the Sunni Islamic missionary movement Tablighi Jamaat, and declared its headquarters in Delhi a COVID-19 hotspot. According to Washington Post, more than 450 coronavirus cases and at least eight deaths in India can be traced back to the “super-spreader” gathering of 2,500 people held on 13th March at the organization/group’s headquarters, located in the dingy and congested Nizamuddin neighborhood of the Indian capital New Delhi. Amidst the nation-wide lockdown and desperate measures to restrict the movement of over a billion people, the gathering has become the target of many anti-Muslim element in a bid to fuel the rampant islamophobia. The trending social media hashtag of “CoronaJihad ” appeared in thousands of online posts. We are yet to see if India’s secular democracy can survive the pandemic or fall sick due to the growing religious strife.

According to NPR, a gathering similar to the one in New Delhi was held in the outskirts of Lahore, Pakistan between 10th-12th March, attended by over 250,000 followers from 80 countries. About 100 attendees of the Tablighi Ijtema have tested positive for COVID-19 across the provinces of Sindh and Punjab. Over 1,300 COVID-19 cases in Malaysia have been linked to the Tablighi conclave convened between 27th February – 1st March at the Sri Petaling Mosque. The national governments are currently cracking down on the attendees of the events in an attempt to curb the spread of corona virus.

The Indian Television news channels are flooded with anti-Muslim rhetoric, flashing headlines such as “Save the country from Corona Jihad”. The IT cell chief of the ruling Bhartiya Janata Party (BJP), Mr. Amit Malviya tweeted “Islamic insurrection” and “illegal gathering of the radical Tablighi Jamaat.” The former Chief Minister of Jammu & Kashmir, Omar Abdullah voiced his opinion on twitter, “Who is the villain of Nizamuddin? Now the #TablighiJamat will become a convenient excuse for some to vilify Muslims everywhere as if we created & spread #COVID around the world.”

The organisation was established in India by Muhammad Ilyas al-Kandhlawi, a Deobandic cleric, in 1927. Since its founding, the influential Tablighi Jamaat has an estimated following between 150 million to 250 million adherents spread across 180 countries. The group owes its enormous success to the congregations held regularly across the world where volunteers devote their time to preach Islam and invite non-Muslims to enter faith. The events hosted by the organization during the COVID-19 pandemic was not in any way an attempt to spread the virus by force but a usual occurrence.

In the backdrop of tense Hindu-Muslim clashes resulting from the Citizenship Amendment Act (CAA) and National Register of Citizens (NRC), it will be important to see if the citizens can live up to the principles of secularism or get influenced by inflammatory speculations of coronajihad to aggravate the growing divide. Now is the time India should unite against the common enemy of COVID-19 rather than scapegoating the Muslims for selfish gains.

3 Responses to Fletcher Voices: “COVID-19, A test for secular India”