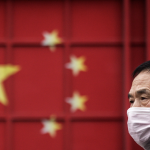 May 2020 Employee of the month: the Coronahawk

Political reporters recently revealed that Republican consultants have landed on a new strategy for fighting the 2020 election: blaming China for the coronavirus outbreak. The president’s party believes they can tar his opponents, including presidential candidate former vice president Joseph Biden, with the allegation of having being too cozy and accommodating with Beijing.

This electoral gambit is a lagging indicator of a more general trend: the rise of the Coronahawk. Since the start of the Covid-19 epidemic in the United States, China-skeptics have seen an opportunity to hasten the coming of a crash in bilateral relations long in the making. Already in mid-February, Senator Tom Cotton of Arkansas was promoting the theory that the novel coronavirus escaped from a Chinese research laboratory, implying negligence on the part of the Chinese state. Going further, he also raised the possibility that the virus was a man-made bioweapon. Coronahawks have argued that Chinese mismanagement of the crisis, including an intentional cover-up by authorities, compounded the negligence. A suit filed by the state of Missouri seeks damages on the basis of these and related allegations; it is likely to go nowhere due to the international norm of sovereign immunity.

When factcheckers pointed out the lack of any public evidence to suggest the virus leaked from a laboratory, Cotton countered with the claim that there was likewise no proof to discredit the hypothesis. This is, of course, an inane argument on all sides: there is no standard for burden of proof and little externally verifiable information about the origins of the virus. There is, admittedly, also no firm basis on which to accept or reject the official Chinese narrative that the coronavirus emerged from the wet markets of Wuhan. On the balance of probabilities, it still appears to be the more likely origin given decades of virologists’ warnings that this precise scenario was likely to produce a killer contagion transmissible to humans.

This game of conjecture seems pointless, but only until the aims of the Coronahawks are taken into consideration. In conspiracy-theorizing, Cotton was unlikely to have been motivated by partisan electoral concerns; in mid-February, President Donald J. Trump could still hope that the Democratic party would produce a more strident leftist or a botched and messy coronation for Biden, and the economy was humming along. An alternative explanation is simply that the senator, consistent with his prior and continuing public rhetoric, is a proponent of a more jingoistic approach to American foreign policy, particularly with respect to China.

U.S.-China relations have been deteriorating since the waning days of the Obama administration. The old and awkward alliance between Chamber of Commerce interests and liberal optimists, erected on the common belief that economic liberalization leads to political liberalization and moderation in foreign policy, has now completely fallen apart. In large part, a reassessment was appropriate given the policies of the Chinese government itself: entrenchment of an illiberal authoritarianism, strident increases in military spending, risky assertions of sovereignty in the South China Sea, abuse of trade partners’ rights to intellectual property, maltreatment of minority groups, and, above all, a nationalistic turn in external relations. Critically, and never raised frequently enough, China has given no ground in its policy toward breakaway regions. It continues to see the use of force as a legitimate and, indeed, appropriate last resort to prevent a Taiwanese move toward more than rhetorical independence. This is no mere paper stance; it is a consistent policy backed by military investments and pro-active diplomacy.

The question remains: what new consensus in Washington can be constructed on the ruins of the old one? The Coronahawks see an opportunity now to take advantage of the national mood and cement in American public opinion a permanent hostility to the Chinese state. This would be a calamity, fueling an overreaction that has already carried away much of the national security state. Not only would a sweeping jingoism deepen the security dilemma in which the two sides find themselves, it could also manifest itself in racist attacks on East Asians in the United States.

A middle ground, integrating a limited decoupling, more focused and realistic investments in the U.S. military, new trade alliances with like-minded countries, and a re-orientation of diplomacy toward recovering the bilateral relationships and international institutions bought-out at junk prices by the Chinese government after decades of U.S. negligence, would best maintain the peace until China’s demographic woes catch up with it in a few decades. In the unstable period until then, more Americans need to be aware and wary of the problematic nature of the Chinese party-state, while fewer should be actively hostile to it.

Share
Tagged with: China • Covid-19 • Employee of the month • US