July and August 2020 Employees of the Month: Joe Arpaio and David Clarke 96 Deaths in Detention: A View of COVID-19 in the Federal Bureau of Prisons as Captured in Death Notices 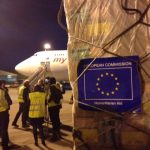 Emancipating the Humanitarian System in Africa: A Conversation with Degan Ali

“The system has created a very good way of self- perpetuating because you have made the cost of speaking out, the cost of challenging the system, very expensive for people… financially expensive.”

Access “Degan Ali on how Black Lives Matter is also a reckoning for foreign aid and international NGOs” referenced in this podcast on “In Pursuit of Development” with Dan Banik.

Executive Director of Adeso, Degan Ali has more than 20 years of hands-on experience in the humanitarian and development field. Degan is a strong believer in transforming the current aid system to give more power and voice to local communities and civil society organizations. Following this belief, Degan continues to innovate and develop new solutions to build the infrastructure that will truly shift power and resources, including co-founding the Network for Empowered Aid Response (NEAR).

2 Responses to Emancipating the Humanitarian System in Africa: A Conversation with Degan Ali