Race and Liberation in South Sudan and the U.S: A Discussion with Jok Madut Jok Emancipating the Humanitarian System in Africa: A Conversation with Degan Ali 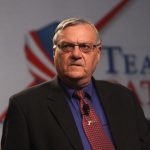 July and August 2020 Employees of the Month: Joe Arpaio and David Clarke

Following the May 2020 murder of George Floyd by Minneapolis police, the United States has witnessed protests across the country on a scale not seen since 1968. Central to this mobilization is a rejection of the status quo of state-sponsored violence against people of color.

For our July and August employees of the month, we highlight two former sheriffs who embody the country’s history of violence, policing, and incarceration.

As the Sheriff of Milwaukee County, Wisconsin from 2002 to 2017, David Clarke and his deputies were frequently accused of abusing inmates in the county jail. Over the course of six months in 2016, four inmates died in the jail due to extreme negligence and abuse, including 38-year-old bipolar inmate Terrill Thomas, who had the water cut off from his cell for six days and died from dehydration.

Clarke’s long career in policing has been marked by fierce opposition to criminal justice reform. He is an apologist for the police’s use of deadly force against unarmed Black men, arguing that such instances are anomalies in an otherwise effective criminal justice system. These “anomalies” are so frequent that 1 in every 1000 Black men can expect to be killed by police in the U.S. today.

Clarke, who is Black himself, has compared Black Lives Matter to the KKK, described young Black men as “lazy” and “morally bankrupt,” and called CNN commentator Marc Lamont Hill a “jigaboo.” Unsurprisingly, Clarke has been embraced by President Donald Trump and his media allies; he was even considered for a leadership position within the Department of Homeland Security.  Since his 2017 resignation, Clarke has become a prominent right-wing media commentator, where he promotes violence and disinformation.

From 1993 to 2016, Joe Arpaio was the Sheriff of Maricopa County, Arizona. Arpaio’s tenure was replete with abuse of power investigations and lawsuits, including one from the U.S. Department of Justice (DOJ), which concluded that Arpaio oversaw the worst pattern of racial profiling in U.S. history. Practices inside the Maricopa County jail were notoriously cruel under his watch. In 1993, when the county jail exceeded capacity, Arpaio set up a “tent city” as an extension: inside temperatures were measured at 145 degrees fahrenheit. In 1995, he reinstated chain gangs, including female and juvenile chain gangs. In 2012, the U.S. DOJ sued Arpaio for unlawful practices, including systematically discriminating against Latinx inmates.

Arpaio was a vocal proponent of Arizona Senate Bill 1070, which was largely struck down by the Supreme Court. If the bill had passed, it would have required immigrants to carry their documents with them at all times, and obligated police to ask for these documents when arresting or even stopping an adult presumed to be an immigrant. Arpaio over-policed certain groups – Latinx and indigenous people were routinely subjected to extended detentions under his watch – while he overlooked actual criminals who posed threats to their communities. Between 2004 and 2007, Arpaio’s office ignored or inadequately investigated over 400 sex crimes. Hundreds of victims of sexual violence were likely denied justice because of Arpaio’s shameful mismanagement of their cases.

Arpaio himself was convicted of a crime. In 2011, Arpaio was told by a federal judge that it was illegal for him to detain undocumented immigrants simply because of their status; however, he encouraged his deputies to continue this practice. In 2017, he was found guilty of contempt of court. One month after his conviction, he received a presidential pardon. Trump praised him as a “patriot [who] kept Arizona safe.” Arpaio terrorized Latinx and indigenous communities, enabled sexual violence, and violated the constitutional rights of inmates.

Former Sheriffs Arpaio and Clarke embody the excessive, violent, and racist policing that is endemic in the U.S.  It is fortunate that they resigned  before the outbreak of COVID-19 because both oversaw unhygienic and inhumane jails that would be particularly lethal during the pandemic (see Tracking COVID-19 in Detention). Nevertheless, jail and prison overcrowding remains a serious public health and human rights concern, with over two million incarcerated in the U.S. and prison systems operating beyond their intended capacities in multiple states.  For these reasons, these two sheriffs are our employees of the month.