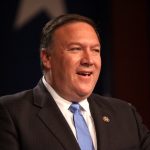 U.S. Secretary of State Mike Pompeo is this month’s Employee of the Month, earned in the last week of August on two counts.

First, Secretary Pompeo shamelessly and quite possibly illegally used the U.S. Embassy in Israel as the stage for a partisan political intervention at the Republican National Convention. The Hatch Act of 1939, to ‘Prevent Pernicious Political Activities’ prohibits all employees in the executive branch of the federal government, except the president and vice president, from using their public office for partisan political purposes. Pompeo’s address to the RNC violated that, certainly in spirit, most likely in law.

There are good reasons for Hatch law. Among them is the need for U.S. foreign policy and the institutions that implement it to possess credibility in the eyes of the rest of the world. Among them is to separate public institutions from political cronyism and cheap deal-making. The Supreme Court ruled on this in 1973: “it is … essential, that federal service should depend upon meritorious performance rather than political service.”

The White House claimed that Pompeo appeared at the online RNC in his capacity as a private citizen. But he was in Jerusalem on official business funded by the U.S. taxpayer. In law at least, the U.S. Federal Government is not subordinate to the Republican Party, just as the Republican Party is not a wholly-owned subsidiary of the Trump family organization.

Meanwhile, the House Foreign Affairs Committee has announced contempt proceedings against Pompeo for persistently refusing to hand over documents that it has demanded relating to the Administration’s dealings with Ukraine, the focus of the impeachment of President Trump earlier this year. Pompeo’s argument is that the committee should also have a parallel investigation into a debunked conspiracy theory that Hunter Biden was also engaged in a similar election meddling activity regarding Ukraine.

Pompeo’s second count is his readiness to destroy the Sudanese democratic revolution for the purposes of mercenary transactional politics in support of the White House’s favorite Middle Eastern powers—Israel and the United Arab Emirates, not forgetting Egypt and Saudi Arabia.

When the civilian-led government in Sudan was formed a year ago, Prime Minister Abdalla Hamdok wagered that he would be able to secure enough international assistance, including debt relief, to stop the country’s slide into economic calamity. That stream of funding was also essential for its public institutions to have the resources to stem the tide of kleptocracy represented by the crony capitalists and mercenary paramilitaries who were set on ensuring that the Sudanese state is a subsidiary of their transnational military-commercial enterprises.

To achieve those two goals, the Hamdok administration needed the U.S. to lift the designation of Sudan as a state sponsor of terror (SST)—a decision dating back to the 1990s, when Usama bin Laden was resident in Khartoum and the Omar al-Bashir regime was indeed an active sponsor of militant jihadism. But by the early 2000s, the pressure on Sudan had paid off: it had expelled terrorists and had become a valued collaborator with the CIA; the SST designation was kept in place solely as a means of tactical leverage and because al-Bashir was so toxic in Congress. With last year’s revolution, it should have been lifted at once. It was imposed for political reasons and it could have been lifted by political fiat—the administration could have found a way to normalize financial relationships and support debt relief while the legal issues were resolved.

Sudan and the U.S. no longer have much significance for one another. Sudan’s trade is oriented elsewhere, its aid comes from elsewhere. But Washington DC has one trump card: the SST designation, and it has played it cynically. The deal is simple: we will lift the SST if you give us something in return. The little something was paying court-awarded compensation to the families of victims of terrorist outrages carried out by Al-Qaeda when it was based in Sudan. The big something was recognizing Israel.

In February, Israeli PM Benjamin Netanyahu met with the chairman of the Sudanese transitional council, General Abdel Fattah al-Burhan, in Uganda. The meeting was facilitated by the UAE and was not announced in advance. The agenda was for Sudan to be third Arab state (after Egypt and Jordan) to recognize Israel, after which Netanyahu would ensure that Sudan was removed from the SST list. There was outrage in Sudan. A model peaceful uprising had removed a dictator who specialized in precisely such shady dealings. The new government was neither Islamist nor hostile to Israel, but Sudanese public opinion—and the spirit of the Sudanese intifada—was not ready for such a step, having long-standing solidarity with the Palestinians. (The UAE itself recognized Israel in August.)

There should have been outrage in Israel too: is Israel to ‘normalize’ its standing in the Middle East by cutting secret deals with military strongmen?

Six months later, there has been no substantive progress on lifting the SST designation, and Sudan is descending into economic chaos including a serious threat of starvation. The generals who are the preferred clients of the UAE and Egypt (and, we may surmise, Israel) gain in power vis-à-vis their civilian counterparts every day that economic normalization is postponed. And Secretary Pompeo’s agenda for his one hour visit to Khartoum on August 24 was neither to save Sudan’s fragile democracy nor halt the country’s humanitarian crisis. He was there to exploit Sudan’s desperation. Pompeo insisted that normalizing relations with Israel would be a step towards lifting the SST status.

PM Hamdok replied that he had no mandate to recognize Israel: that should be considered by the elected government due at the end of the transitional period. He asked for the issue of normalizing relations with Israel and lifting the SST to be delinked.

Meanwhile, in the last week, Pompeo also authorized the suspension of a package of U.S. assistance to Ethiopia, on the grounds that it is not cooperating with the U.S. mediation between Ethiopia and Egypt on the Grand Ethiopian Renaissance Dam. Washington DC is using its financial power to bully a small country on behalf of President Abdel Fattah al-Sisi, whom Trump once referred to as ‘my favorite dictator.’

Has U.S. foreign policy descended to this zero-sum transactional bargaining at home and abroad? It’s not only a travesty of diplomacy but it is conducted with in a way that is both brazen and clumsy. It seems so, Secretary Pompeo is therefore the deserving recipient of the World Peace Foundation “Employee of the Month” award for September.

Share
Tagged with: corruption • Employee of the month • Trump • US