September 2020 Employee of the Month: Mike Pompeo Campaigning against corruption: a discussion with Hennie Van Vuuren 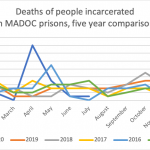 New data from MADOC doesn’t change the question: why did so many people die in its prisons in April 2020?

UPDATE Sept. 8, 2020 at 12:00 p.m.: DOC contacted me directly to provide additional details on cause of death related to those who died in April 2020. The below essay was updated to reflect this additional information.

Writing on September 1 on this blog, I presented previously unreleased data from the Massachusetts Department of Correction (DOC) that I received on August 3rd following a request under the Massachusetts Public Records Law (Law), Chapter 66, Section 10 of the Massachusetts General Laws. The key finding was that April 2020 witnessed the highest number of deaths in DOC prisons in five years, nine of which were listed without cause of death.

A journalist saw the data, interviewed me, and published an article about it on September 4th. The same day his editor pulled the story following a complaint by DOC that, as was explained to me by the journalist: (a) the DOC had no record of my request, hence casting doubt on whether the data was real at all; and (b) that the data in any case was outdated, and they were able to release further details about cause of death.

Proving that the data came from DOC was quite easy, as they sent me a pdf letter on letterhead with the accompanying excel files (see the letter here from the initial request and here for the updated data) listing all deaths 2015 – 2020. Either their record keeping is exceptionally bad, they intentional misrepresented how I received the data in order to get the article pulled, or there was some miscommunication that I am not aware of. Learning through the journalist that the DOC was able to now include further information about cause of death, I immediately filed a second request to receive this updated information. The DOC promptly released a new excel file to me with the additional details.

Table 1.1 Deaths in MA DOC prisons in April 2020, including cause of death as initially released on August 3, and updated in data released on September 4, 2020.

The added information about cause of death is helpful but does not mitigate the need for the Commonwealth to launch an independent investigation. This should not be an extraordinary request, given the high number of deaths in DOC prisons and the fact that COVID is a new virus about which there is still much to be learned.

Two questions are raised by the revised data.

First, three deaths listed were caused by chronic conditions, including heart disease, obesity, chronic obstructive pulmonary disease and liver disease, all of which had been flagged by the CDC since March 2020 as potentially increasing a person’s risk related to COVID-19. The CDC states that there is strong and consistent evidence that heart disease and obesity was an “underlying medical conditions that put individuals at increased risk for severe illness from COVID-19″; and there is “limited evidence” of the same for other chronic lung and liver diseases. Why were people with these known pre-existing conditions not given home confinement or early release, knowing that their health was at elevated risk?

And, the main question I previously asked remains unanswered: Why were there 14 deaths in a single month?

As I noted previously, given the unlikelihood of (a) it would be irresponsible for any public figure to accept this explanation without an investigation. Secondly, whether the second two explanations capture what happened or some mix of factors is at play, the Commonwealth is responsible for the lives of people in its prisons. Anytime there is a sudden spike in deaths in publicly funded and managed facilities it is incumbent on public officials to understand why, and to do so through a fair, transparent and independent investigation.

The question regarding why so many people died in Massachusetts’ prisons in April 2020 will only be answered when will the Commonwealth initiates a public and independent investigation.