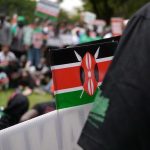 By World Peace Foundation On October 7, 2020

In this podcast, World Peace Foundation Executive Director Alex de Waal speaks with Nanjala Nyabola, writer and political analyst based in Nairobi, Kenya. Her new book is Traveling While Black: Essays Inspired by a Life on the Move, Hurst & Company Publishers Limited (November 2020)

“The government is trying very hard to re-assert itself in a place where they had been outplayed, out organized, outflanked by citizens and by civil society, and is now trying to impose itself as the center of power.”

Nanjala Nyabola is a writer and political analyst based in Nairobi, Kenya. Her work focuses at the intersection between technology and politics in East Africa, as well as East African politics more generally. She is the author of “Digital Democracy, Analogue Politics: How The Internet Era is Transforming Politics in Kenya” and “Travelling While Black: Essays Inspired By a Life of Travel” (forthcoming), as well as numerous articles for journals and magazines around the world.