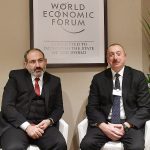 By World Peace Foundation On November 2, 2020

The disputed region of Nagorno-Karabakh has been at war for the past month. Both the Presidents of Azerbaijan and Armenia contributed to escalating tensions and neither has demonstrated sufficient will to bring the violence to an end. Russian President Vladimir Putin estimated on October 23 that close to 5,000 people had died in less than four weeks of renewed fighting.

Although the details are still murky about how precisely the new war began, it is logical to conclude that Azerbaijani president Ilham Aliyev launched the new Karabakh war on September 27. The status quo that persisted since a ceasefire marked the end of the previous war in 1994 suited the Armenian side. The Azerbaijani side, who lost that war and large amounts of territory, was the one with every interest in shaking things up.

Aliyev has been president of Azerbaijan since 2003. He has made his country much more autocratic and punished dissent. He and his Armenian counterparts have only intermittently engaged in negotiations over a peaceful resolution of the Karabakh conflict. Over the years Aliev has repeatedly blamed international mediators for not resolving the conflict. He has taken little responsibility for toxic rhetoric towards Armenians and refused to give the Armenians of Karabakh any reassurances of what a putative return to Azerbaijani rule might mean.

Nonetheless, Aliyev shares responsibility for the war with Armenian prime minister Nikol Pashinyan. Pashinyan came to power in a dizzying peaceful uprising in Armenia in 2018 known as the Velvet Revolution. His domestic democratic credentials are strong. His first meetings with President Aliyev were positive and the Azerbaijani side delivered on a commitment to de-escalate violence on the ceasefire line known as the Line of Contact.

These hopeful beginnings did not bear fruit. Pashinyan failed to deliver on what the Azerbaijanis believed was his side of the bargain: a return to more substantial talks. On the contrary, he raised the level of patriotic rhetoric and walked away from the “Basic Principles” framework for negotiations. In August 2019, he travelled to Karabakh and made a fiery speech in which he proclaimed, “Artsakh is Armenia, Period!” A few days before fighting started, the de facto authorities in Karabakh announced provocatively that they intended to move the local parliament to the former Azerbaijani-majority town of Shusha.

As far as the Azerbaijani side was concerned, these moves constituted an Armenian withdrawal from the peace process and presented them with a pretext to begin military action.

Hundreds of people on both sides are now paying the price for the joint failure.

Photo :Ilham Aliyev and Armenian Prime Minister Nikol Pashinyan held informal meeting in Davos.jpg” by The Presidential Press and Information Office’s of Azerbaijan is licensed under CC BY 4.0

Share
Tagged with: Armenia • Azerbaijan • conflict • Employee of the month