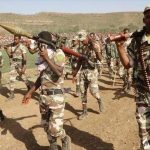 On 10 December 2019, the same day that Ethiopian Prime Minister Abiy Ahmed received the Nobel Peace Prize, the 1991 winner of the prize, Aung San Suu Kyi was in court in the Hague, defending her government against accusations of genocide.

Abiy Ahmed is racing down that same road.

Over the weekend, the spokesman for the Ethiopian army, Colonel Dejene Tsegaye said that the army planned to encircle the Tigrayan capital Mekelle with tanks and begin shelling the city:

That would be a war crime. Abiy gave a 72-hour ultimatum to the residents of the city.

There is good reason to suppose that the leadership of the Tigray People’s Liberation Front (TPLF) may have committed war crimes too. In fact the casus belli for the offensive by the Ethiopian army is an alleged mass killing of Ethiopian army officers on 3-4 November as TPLF units overran army bases. In response, Abiy launched ground and air attacks.

The TPLF’s reported action was also reckless. Its military leaders may have believed too much in the myth of their own invincibility in the face of an all-out attack.

As the war has proceeded, government aircraft have bombed Mekelle town, including the university. The TPLF has fired rockets at cities outside Tigray. Amnesty International has reported large-scale killings of civilians by Tigrayan militia, and refugees entering Sudan speak of killings by Amhara militia. Violations by one side don’t excuse violations by the other. In a war the two sides are bound by the same standards.

Abiy has refused to call it a war and has instead called it a police action with the intent of bringing criminals to justice. That may have served him well in public relations in Ethiopia and have convinced the U.S. Ambassador and Assistant Secretary of State for Africa, but it’s not how the law works.

The Federal Government is at war with the TPLF. Airstrikes, tank battles, artillery barrages against a belligerent that controls territory and exercises command and control over armed forces, constitute a war. And in war, international humanitarian law and international criminal law apply. If the federal forces commit war crimes, the court won’t accept the plea that the other side fired the first shots.

The African Union has appointed envoys to mediate between the warring parties. The world should support them in calling for an immediate ceasefire and referring the case of the Tigray war for an independent international investigation.

One Response to Stop War Crimes in Ethiopia Today