Interview with Stacey Borden: on trauma, COVID, and clemency for incarcerated women Eritrea’s Role in Ethiopia’s Conflict and the Fate of Eritrean Refugees in Ethiopia 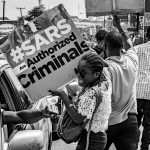 For their history of abuses, continued abuses, and the system of unaccountable violence they represent, the December “Employee of the Month” award goes to the Nigerian Special Anti-Robbery Squad (SARS).

A fixture of life in Nigeria since the 1990s, SARS gained international notoriety in October 2020 after a video documenting a SARS officer shooting a man and stealing his car went viral sparking the largest protest movement in decades.  This was not the first time SARS was associated with allegations of human rights abuses.  While SARS in the 1990s initially helped provide security against robberies and violent crimes, in the early 2000s it became synonymous with abuse of power and human rights violations including torture, arbitrary arrest, and extrajudicial killings. Despite the abuses being well-documented and even investigated by the government itself, there is little evidence that SARS officers have ever held accountable for their actions.

Sparked by the October incident, hundreds of Nigerians began sharing stories of abuses by SARS and calling to #EndSARS. The protests built on past protests against SARS and quickly garnered more support than ever before. Soon thousands across the country had taken to the streets to demand police accountability for abuses and systemic reform.

In response to the rising pressure, on October 11, the Nigerian government announced that SARS had been disbanded.  In addition, the government agreed to release detained protestors, prosecute abusive police officers, compensate families of victims of police brutality, psychologically evaluate and retrain all dismissed SARS personnel before their redeployment, and higher police salaries. At face value, this was a victory for protestors, but it was short-lived.

While the Nigerian government disbanded SARS and President Buhari pledged to hold those guilty of abuses accountable, within two days the government had announced a replacement unit, the Special Weapons and Tactics (SWAT) unit.  Many saw this simply as a rebranding of SARS, a tactic that has repeatedly been used by the Nigerian government when security units are accused of human rights abuses as a means for them to continue operating without any meaningful changes.  Indeed, the government’s brutal crackdown on the protests since early October has only validated this skepticism of the government’s promises of moderation and accountability.

This leads to the larger concern of the systemic violence against the Nigerian people that SARS, now SWAT, represents.  The #EndSARS protests began with the immediate goal to disband the unit and seek accountability for the unit’s abuses, but it has grown to encapsulate a broader array of grievances against the government.  Intense frustrations, especially among young people, for abuses by security forces (including those perpetrated against the LGBT+ community), elite corruption, rising costs of food, and extreme levels of unemployment, have motivated thousands to join the protests.  Nigerians have taken to the streets to demand change, yet the institutions mandated to protect, represent, and serve the people have been weaponized to brutally suppress and end the calls for change.

On October 15, the military issued a thinly veiled warning that it would respond swiftly and with force to any further activity seen as undermining the government. Civil society activists and nonviolent protestors were soon branded by the government as “subversives” and, in some cases, alleged terrorists.  Violence followed.

On October 20, the Nigerian security forces opened fire on peaceful protestors gathered at Lekki Toll Gate in Lagos killing 12 protestors.  The protestors were reported to have been sitting together holding Nigerian flags and singing the national anthem when the military opened fire. Despite numerous eyewitness accounts and video recordings, the Nigerian Military tweeted that these allegations were “fake news.” Local and international activists have charged that the shooting at Lekki gate was a “premeditated” attack against protestors and that the government proactively sought to hide its involvement. Eyewitnesses report that in the hours leading up to the shooting, men allegedly hired by the government removed CCTV cameras in the area, and just before the shooting began, the lights in the area were turned off.  If true, these allegations demonstrate the emptiness of the promises for security sector reform.

Government violence against protestors has not been limited to the Oct. 20 attack in Lagos. Protests across the country are met with a heavy-handed and unaccountable security response drawing condemnation from local and international actors, including from the United Nations.

From security forces opening fire on peaceful protestors at Lekki Gate to the activists being labeled and targeted as terrorists, Buhari’s pledges for accountability and change ring hollow.  What began with demands for accountability of a police sub-unit is now about much more. And against the odds, activists charge on.

For the abuses they perpetuated, the ones likely to happen under a new banner, and unaccountable violence they represent, the Nigerian SARS is this month’s “Employee of the Month.”