Talking and fighting about self-determination in Ethiopia “They Have Destroyed Tigray, Literally”: Mulugeta Gebrehiwot speaks from the mountains of Tigray 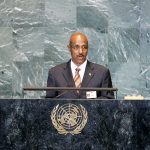 Seyoum Mesfin, who was killed in Tigray this week at the age of 71, was Ethiopia’s longest-serving foreign minister. His untimely death robs Ethiopia of a man who exemplified the country’s tradition of enlightened and progressive patriotism. Under other circumstances we would expect a national day of mourning and a state funeral, including national and international recognition of Seyoum’s exceptional contribution to the norms, principles and practices of peace in Africa.

As a radical student activist, Seyoum was one of the founders of the Tigray People’s Liberation Front in 1975. Like many of his generation, he was an avid debater of different revolutionary ideas, and was one of the first to articulate the agenda of self-determination for the diverse nations, nationalities and peoples within the Ethiopian empire. He was appointed as head of foreign relations for the TPLF and became well-known internationally as the face of the Tigrayan struggle. I first met him in 1988, travelling within the TPLF-held areas of the country, and recall well the vigorous discussions we had about the challenges of the revolution and what should be their agenda when they took power. One of the things that most struck me about Seyoum was his lack of any personal bitterness towards the members of the military regime that was, at that time, waging unlimited war against the people of Tigray. The leaders of the Dergue, he assured me, would face justice.

Three years later, when he was in the Foreign Minister’s office in Addis Ababa as a leader of the transitional EPRDF government, he reminded me of this promise, and sent me to visit the Dergue leaders. They were all detained in a university dormitory, with just two guards on the gate—to deter angry citizens from breaking in and attacking them. General Legesse Asfaw, who had ordered the most murderous aerial assault of the war when fighter jets bombed the market town of Hausien and killed about 1800 civilians, was kept in a special room for his own protection. The TPLF could easily have executed him. But for Seyoum and his comrades, ‘revolutionary justice’ meant a transformation in the practice of killing your defeated enemies.

The dictator Mengistu Haile Mariam had executed 61 senior officials of the overthrown imperial government in November 1974 in his seizure of power. Among them was Seyoum’s predecessor in the foreign ministry, Aklilu Habtewold, shot dead within earshot of the headquarters of the Organisation of African Unity, an institution he had done so much to create—without any international condemnation. The EPRDF would not follow that path of arbitrary revenge: instead, officials of the military regime were to be brought to court and charged according to due process of law. By a quirk of the Ethiopian Penal Code, the definition of genocide under domestic law included attempts to eliminate not just national, ethnical, racial or religious groups, but political groups as well, and so it was possible to convict (in absentia) Mengistu for acts of genocide for crimes perpetrated during the ‘Red Terror’ of 1977-78.

Mengistu himself fled to Zimbabwe with his family. When his children’s passports expired, the Ethiopian ambassador in Harare asked for advice. Seyoum responded without hesitation. He said that the sins of the father should not be visited on the children: they were Ethiopians entitled to passports and should be issued with them at once.

In the same spirit, Foreign Minister Seyoum was a driving force behind the setting up of the International Panel of Eminent Personalities to investigate the genocide in Rwanda in 1994. The IPEP report was the first formulation of the doctrine of ‘non-indifference’: the responsibility of countries to intervene to prevent genocide. The United Nations later reconfigured this as the ‘Responsibility to Protect.’ Had he been a less modest man, Seyoum might have clamoured for international prizes to reflect his contribution. Instead, he invested his efforts in making sure that African nations adopted the norm and incorporated it into the Constitutive Act of the African Union.

Under Seyoum’s guiding hand, Ethiopia became admired as Africa’s biggest contributor to peace and security, a reliable contributor of high-quality troops to peacekeeping operations, and a partner in conflict resolution.

Another example of Seyoum’s quietly principled diplomacy is the Declaration of Principles for the resolution of the conflict in Sudan. In 1993-94, when the north-east African regional grouping the InterGovernmental Authority on Development (IGAD) was mandated with taking forward the mediation of Sudan’s war, Seyoum convened the IGAD foreign ministers and made the case that their efforts needed to be guided by principles that would ensure a just and lasting peace. Among them he identified the right of southern Sudanese to self-determination, should the Sudanese government fail to respect the ethnic diversity and democratic rights of all Sudanese. This was a radical innovation: never before had an African intergovernmental organization formally recognized the right to self-determination of an oppressed minority in a sovereign country. It is no exaggeration to say that the IGAD Declaration of Principles, penned by Seyoum in his office in Addis Ababa, surmounted the single biggest legal and political hurdle in the southern Sudanese road to independence.

Indeed, during his nineteen years in office, Seyoum presided over the rehabilitation of Ethiopia’s international standing. From being a pariah under the Dergue, Ethiopia became widely respected. Ethiopia succeeded in making friends with the United States, Europe and China, with Africa and with the Middle East. Long-running rivalry with Sudan was peaceably resolved. The countries that Ethiopia saw as long-term rivals and potential threats—Egypt and the Gulf States—were kept at bay. Under Seyoum’s guiding hand, Ethiopia became admired as Africa’s biggest contributor to peace and security, a reliable contributor of high-quality troops to peacekeeping operations, and a partner in conflict resolution.

In some ways, Seyoum returned Ethiopia’s foreign policy to the traditions of Emperor Haile Selassie: seeking to be on good terms with all but dependent on none, using soft power to build alliances that allowed the country to chart a path all of its own. In his ministry, he retained the most professional and capable officials from the previous government, arguing that the country needed both their skills and also respect for an institution of state. Like Aklilu bringing Ethiopia’s foreign policy skills to bear on building the OAU, Seyoum was a discreet but influential architect of the creation of the African Union.

The big exception to the ‘friendship with all’ strategy was Eritrea, and Seyoum resisted calls for Ethiopia to seek a military solution to the dispute, opting instead for containing and isolating Eritrea in the hope that time would bring about an end to ruthless regime of President Isseyas Afewerki. I recall Seyoum lamenting that the most progressive and democratically-minded members of the Eritrean political elite—such as his former counterparts in the Eritrean foreign ministry, Petros Solomon and Haile ‘Duru’ Woldensae, had been first sidelined and then destroyed. Like Mengistu during the darkest days of the Red Terror, Isseyas’s approach to any political challenge was total elimination, and that included his closest comrades in arms, consigned to incommunicado imprisonment without charge, trial or contact with even their closest families. Isseyas made his move on September 18, 2001, knowing that world attention was elsewhere and he could act without international scrutiny. ‘Duru’ is feared to have died; Petros’s fate, along with so many others, isn’t known. Seyoum mourned his colleagues’ demise. And he insisted that the culture of systematic elite murder—politicide, or genocide of political groups—was something that should never be allowed to re-enter Ethiopia.

After retiring as foreign minister, Seyoum served as ambassador to China and as chief mediator for the peace talks in the conflict in South Sudan. The civil war erupted in South Sudan on December 13, 2013 and within a week, a delegation of foreign ministers of IGAD countries was in Juba insisting that the fighting should cease and a political solution should be found. Overruling the predictable objections that it was an internal affair and the opposition were traitors, IGAD and the African Union put the welfare of the country above the anger and ambition of South Sudan’s warring politicians. Seyoum was the mediator: patient and fair, continually frustrated by the mercenary callousness of his interlocutors.

As the EPRDF began the process of liberalization in Ethiopia three years ago, leading to the selection of Abiy Ahmed as prime minister, Seyoum was prominent among a small group of Tigrayans who stayed on within the highest levels of government, trying to steer the transition towards consensus. He remained in a post as advisor within the Prime Minister’s Office until late 2019, though the extent to which the PM called upon his experience and wisdom isn’t at all clear. Certainly, Abiy’s readiness to partner with autocratic Eritrea disturbed him.

As a person, Seyoum was always warm and accessible, and ready to talk without regard for rank or protocol. He had a well-deserved reputation for treating all his staff with care and respect, for keeping his door open.

Seyoum became less active in politics, planning to spend more time reflecting on the lessons learned from his unparalleled career, and building up the think tank, the Centre for Dialogue, Research and Cooperation that he founded. His health also suffered: he had a serious back problem and had difficulty walking more than short distances.

The circumstances of Seyoum’s killing aren’t clear. The Ethiopian government is not a reliable source of information. Eritrea—which may well have carried out the assassinations—is remaining silent. The official report that Seyoum and his colleagues ‘refused to surrender’ is opaque. The other two elderly Tigrayans killed in the same incident were Abay Tsehaye, who just had heart surgery, and Asmelash Woldeselassie, who is blind.

Seyoum is survived by a son and a daughter. His wife and one son were arrested and are out on bail.

The circumstances of the killing of Seyoum, Abay and Asmelash warrant an immediate high-level international investigation. It is hard to see how these three men posed a military threat. Their killing is part of a pattern of systematic targeting of Tigrayans, which goes beyond removing their political influence in Ethiopia to the wholesale elimination of a political class representing an ethnic or national group. It is consistent with the politics of genocide practiced by Mengistu Haile Mariam and his generals and by Isseyas Afewerki inside Eritrea and in his ongoing military operations inside Tigray today.

Seyoum deserved to end his days in comfortable retirement with all the respect due to a statesman and patriot. His killing should be a red line. The world should not repeat the error of its silence over the extra-judicial execution of his predecessor Aklilu. The killing must stop today.

14 Responses to In Memoriam: Seyoum Mesfin, Ethiopian Peacemaker and Patriot